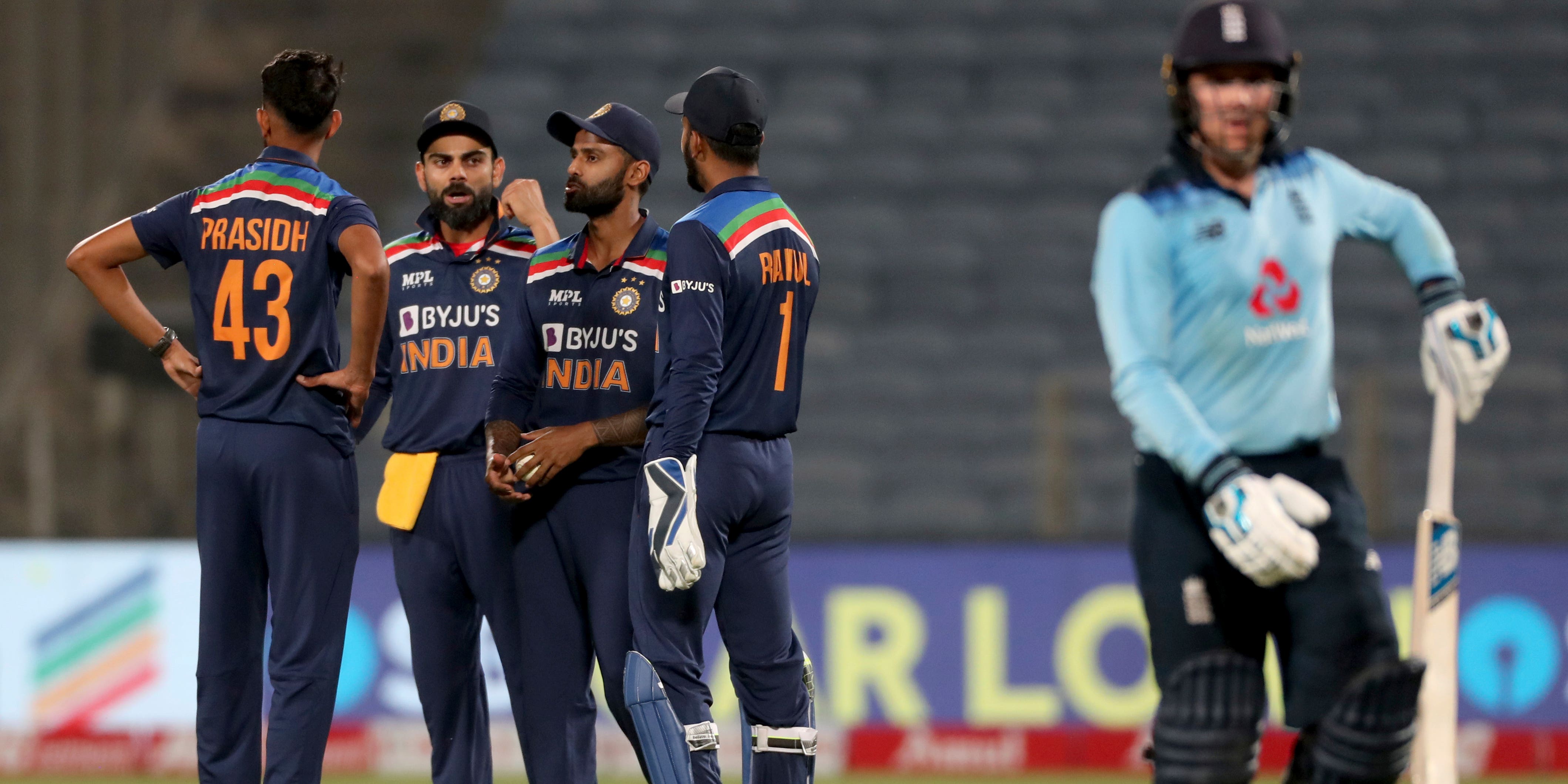 England were unable to capitalise on a rampaging opening stand from Jonny Bairstow and Jason Roy as India claimed a 66-run victory in the first of three one-day internationals at Pune.

Set 318 to win, England’s vaunted openers flew out of the traps, putting on an extraordinary 135 in 14.2 overs, but Roy’s dismissal opened the floodgates and, despite Bairstow’s belligerent 94 from 66 balls, the tourists subsided.

Prasidh Krishna had been overwhelmed early on debut, but he recovered to finish with four for 54 as England were bundled out for 251 in 42.1 overs after a late surge from KL Rahul and Krunal Pandya had helped India to 317 for five.

Twin injuries, but okay to bat

Eoin Morgan required four stitches on his hand, while Sam Billings sprained his collarbone joint after an awkward fall and, although they were able to bat, the pair were off the field in the closing stages of India’s innings.

The absence of Morgan’s calming influence was a particular blow as Rahul and Krunal, making his ODI bow, brutalised England’s bowlers in an unbroken 112-run stand, helping India recover after losing four for 36 at one stage.

Shikhar Dhawan (98) and Virat Kohli (56) ultimately laid the foundations for Rahul (62 not out off 43 balls) and Krunal (58no off 31), who embraced his brother Hardik at the end of his knock, the pair having lost their father in mid-January.

The fireworks from Rahul and Krunal were in stark contrast to the watchful approach employed by Rohit Sharma and Dhawan after India were invited to bat first as Mark Wood and Sam Curran, standing in for the rested Chris Woakes and injured Jofra Archer, capitalised on a hint of movement to keep the dangerous opening batsmen largely quiet.

A rising Wood delivery thudded into Rohit’s back elbow, necessitating treatment, and the issue continued to trouble the opener, who chased a wide one off Ben Stokes to depart for 28. But Kohli upped the ante upon his arrival, combining lavish drives with quick singles in a typically-fluid run-a-ball half-century.

Dhawan took the cue from his captain, launching Adil Rashid over midwicket to reach his fifty before dispatching Moeen Ali over the ropes, compounding the all-rounder shelling a chance in the deep on his return to England duty when the India opener was on 59.

Moeen atoned for his drop, holding on after Kohli had flicked Wood to deep midwicket, ending a 105-run partnership which was the start of India’s lurch from 169 for one to 205 for five. Dhawan fell amid the wobble, two runs short of his ton after pulling to midwicket off Stokes, who had his third wicket when Hardik Pandya edged to slip.

While one Pandya was kept subdued, the other prospered as England let their opponents off the hook. With Morgan – and Billings – watching on helplessly by this stage, Rahul and Krunal added 112 from the last 57 balls.

It was a boundary-laden partnership, with Rahul lethal in the arc between long-off and midwicket to flay four sixes and as many fours, while Krunal scored all around the wicket to bring up his fifty off just 26 balls, the fastest by a debutant in ODIs.

But, if that was impressive, then Bairstow and Roy went up another gear at the beginning of England’s reply.

Bhuvneshwar Kumar was typically economical but Roy was into his stride with successive fours off India debutant Krishna, who conceded an eyewatering 22 in an over as Bairstow went into overdrive, having taken six from his first 18 balls.

Kohli shuffled his pack, turning to Krunal and Kuldeep Yadav early on, but the spinners were powerless to stop Bairstow’s onslaught, conceding two sixes apiece as the Yorkshireman heaved across the line with impunity to take the lead in an incredible 135-run stand in less than 15 overs.

There would have been a sigh of relief in the home camp as Roy miscued to point for 46, while Stokes’ move up the order in Joe Root’s absence backfired as he chipped to extra cover to give Krishna two wickets in two overs.

Morgan was given a let-off from his first ball after a diving Kohli could not cling on to a chance at slip, but the wickets continued to tumble as Bairstow holed out to deep midwicket off Shardul Thakur to fall short of his hundred.

Thakur (three for 37) further swung the pendulum India’s way as Morgan (22) got a thin edge to a bouncer, while Jos Buttler was trapped on the crease for two, continuing a run of single-figure scores in ODIs since the 2019 World Cup.

England had lurched from 135 without loss to 176 for five and it was ultimately a position they were unable to recover from as India drew first blood in the series.