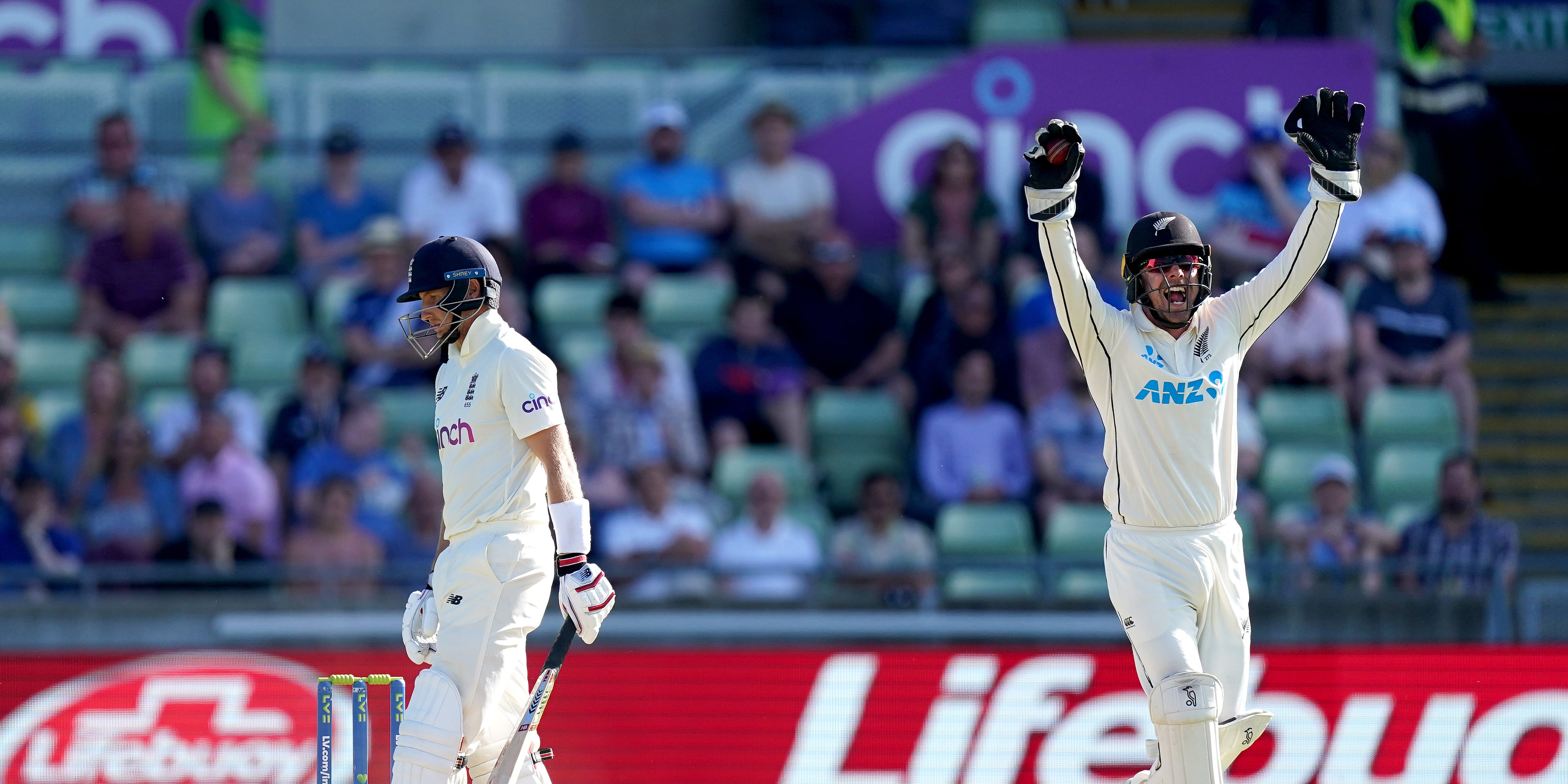 England’s fragile batting line-up was routed by New Zealand on day three of the second Test at Edgbaston, with Joe Root’s side facing the grim inevitability of a first home series defeat since 2014.

After conceding a first-innings deficit of 85 a combination of reckless shot selection and relentless bowling from a Black Caps side tuning up perfectly for the World Test Championship final, saw England slump to 76 for seven.

It took tailenders Mark Wood and Olly Stone to take the embarrassment of an innings loss off the table but after limping to stumps on 122 for nine – still just 37 in front – there will be nowhere to hide on day four.

Sri Lanka were the last touring side to deal England a bloody nose on their own soil but New Zealand are now certain to land a first win here in 22 years.

England had earlier bowled out the opposition for 388 and began their torrid stint with a thankless six-over spell before tea.

All the ingredients were there for New Zealand to force home their position but the brevity of England’s resistance was remarkable nonetheless.

Rory Burns, the home side’s form batsman, left the first ball of the innings but was immediately tempted to push at Matt Henry’s second. It was a nondescript stroke aimed in the general direction of extra cover but instead ended up in Tom Latham’s hands at slip.

Dom Sibley fared only marginally better with eight but was still in the pavilion before tea, squared up and poking as Henry probed away on a good line. This time the chance flew to Daryl Mitchell in the cordon but he was no less secure than his captain.

The interval offered a brief respite for England but things went from bad to worse in the evening session, with Zak Crawley next on the Kiwis’ chopping block.

Coming to the crease with nine single figure scores in his 11 attempts since the dizzying career-high of his 267 against Pakistan last summer, he had plenty to do.

Things started reasonably and he had moved along to 17 before being undone by a worryingly simple delivery by Henry. There was no real mystery to it, but Crawley got his angles wrong and fell lbw after failing to make any kind of contact with the bat.

Root was hunkered down in pure defence but could not find a partner to share the load.

Ollie Pope got runs on the board relatively quickly, 23 of them in 20 balls, but his knock had the feel of someone drinking up a little too swiftly before last orders.

Trent Boult was working him into position all the while and eventually pulled the trigger with a big inswinger destined to clip the top of middle stump.

England were 58 for four and were now undeniably in colossal trouble.

Dan Lawrence at least had confidence on his side, having scored a career-best 81 not out on Friday, but that soon evaporated as he bagged a second-ball duck. He pushed at a fine delivery from Neil Wagner, nicking through to Tom Blundell.

The situation was grave as James Bracey entered the fray, having failed to score in both of his previous Tests innings and with an untidy wicketkeeping performance already on his mind.

Gallows humour ensured the 24-year-old a large cheer when he scampered through for his first international run but a messy demise was imminent. With eight runs to his name he chose to sweep Ajaz Patel’s third ball, but lunged too hard and played on with his glove after leaving all three stumps exposed.

With hopes of victory long gone and no real prospect of saving the match, England were merely hoping to avoid defeat by an innings.

Even that meagre goal was in danger when Root’s 60-ball resistance ended tamely, slashing a short one from Patel straight into Blundell’s gloves.

A lively eighth-wicket stand of 44 between Wood and Stone ensured the tourists would need to bat again, Wood guaranteeing it with an unexpected flourish as he clouted Patel for six. But it also cast the top-order shambles in an even worse light.

Wagner eventually ended Wood’s fun for 29 and Boult proved far too good for Stuart Broad, but Stone and James Anderson played out to book in at least a sliver of play on Sunday.

The day had started with New Zealand on 229 for three, still 74 adrift, but England set a sloppy tone in the first hour.

New Zealand scrubbed 63 from the lead with Ross Taylor going after some uninspired bowling and benefiting from a dropped catch by substitute fielder Sam Billings after top-edging a Broad bouncer.

It fell to Stone to lift the mood, entering the attack after drinks and removing Taylor for 80 with his third ball.

He should have had Blundell at the end of the same over but Bracey parried the catch to continue what was an untidy showing with the gloves.

England’s seamers took regular wickets thereafter but their hard work was frittered away by an increasingly worrying batting lineup.