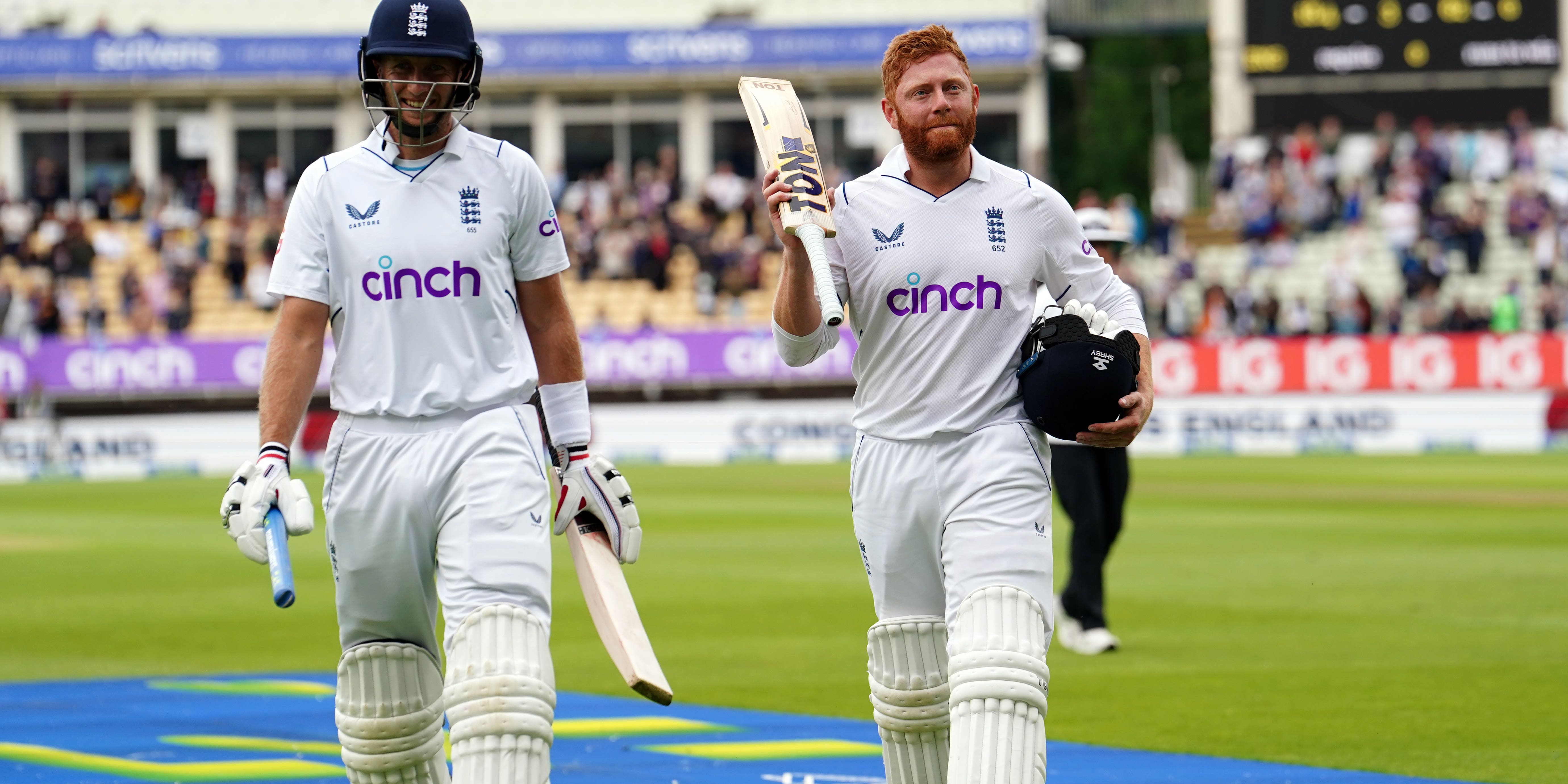 Joe Root and Jonny Bairstow hit twin centuries as England’s revitalised Test side roared into the history books, breezing a record chase of 378 to floor India at Edgbaston.

England completed a staggering seven-wicket success as their Yorkshire run machines ran riot with an undefeated stand of 269.

Bairstow made 114 not out for his second hundred of the match and his sixth this year, continuing a purple patch that has redefined his whole career, while Root’s 142no was a masterclass that took him to 28 Test tons.

England started day five needing another 119 but did it with comical ease in less than 25 overs and not a single concrete chance offered. This was nominally a series decider, held over from 2021 after a Covid postponement last September, but while victory squares the scoreline at 2-2 it barely seems fair to tether this England side to the past.

They are forging an entirely new identity under the adventurous captaincy of Ben Stokes and the guidance of head coach Brendon McCullum, delivering in incredible fashion on a lofty ambition of changing the face of Test cricket. After chasing targets of 277, 296, 299 and now 378 with a flourish this summer, it is hard to argue against.

Their previous record pursuit came three years ago when Stokes produced an Ashes miracle at Headingley to reel in 359. But where that was a nail-biting heist featuring number 11 Jack Leach as an unlikely accomplice, this was achieved with ease.

The fourth day had ended with England in full control on 259 for three, with both batters into the 70s and India looking increasing weary in the field. But conditions in the morning gave the tourists cause for optimism.

There was thick cloud cover overhead and gloomy enough light to require floodlights from the start of play. Mohammed Siraj was given first chance to exploit the conditions and his first two deliveries misbehaved slightly, the first leaping off a length and the second jagging back in.

It was a slight surprise to see India quickly call for a change of ball and, when the umpires agreed, Bairstow soon set about knocking the replacement out of shape. With Mohammed Shami searching for an outside edge he peeled off back-to-back boundaries through point.

Root was initially content to rotate the strike with singles and had a moment of minor fortune when an under-edge skimmed past his stumps, past the wicketkeeper and away for four more. By the time Shami conceded four byes down the leg side, the target had already dipped into double figures.

India’s early enthusiasm was already on the wane but England were beginning to thrive, Bairstow stroking Jasprit Bumrah into a wafer-thin gap at mid-on and Root flexing on to one knee to lace Shami through cover.

Bairstow beat Root into the 90s but was overtaken again when the former skipper pocketed consecutive boundaries from Bumrah, one chivvied down to third man and the other pinged to deep midwicket.

Root was first to three figures in 136 balls, with a ricochet over the slips doing the trick. He put on a clinic after reaching his ton, taking apart all-rounder Shardul Thakur.

Having first shimmied down the pitch and clubbed him firm and flat over the top, he stepped back in the crease and aced the latest trick up his sleeve – a reverse ramp for six over third man. It is a shot he has added to his already broad repertoire this summer but every time it makes an appearance, it leaves jaws on the floor.

Bairstow moved carefully to his century, unwilling to let another golden opportunity slip through his fingers, working a single off Ravindra Jadeja to kick off a familiar sprinting celebration.

With the landmark secured he cut loose, smashing Siraj for three muscular boundaries in as many balls before leaving the winning moment to Root. He reverse swept the spinner for four, then dashed through for the decisive run, the finishing touch on a quite incredible performance.

England’s wholehearted bowling performance on day four went a long way to teeing up a famous win, while Alex Lees and Zak Crawley set the tone for the chase with an ambitious opening stand of 107. But in Root and Bairstow they arguably have world cricket’s two form players.