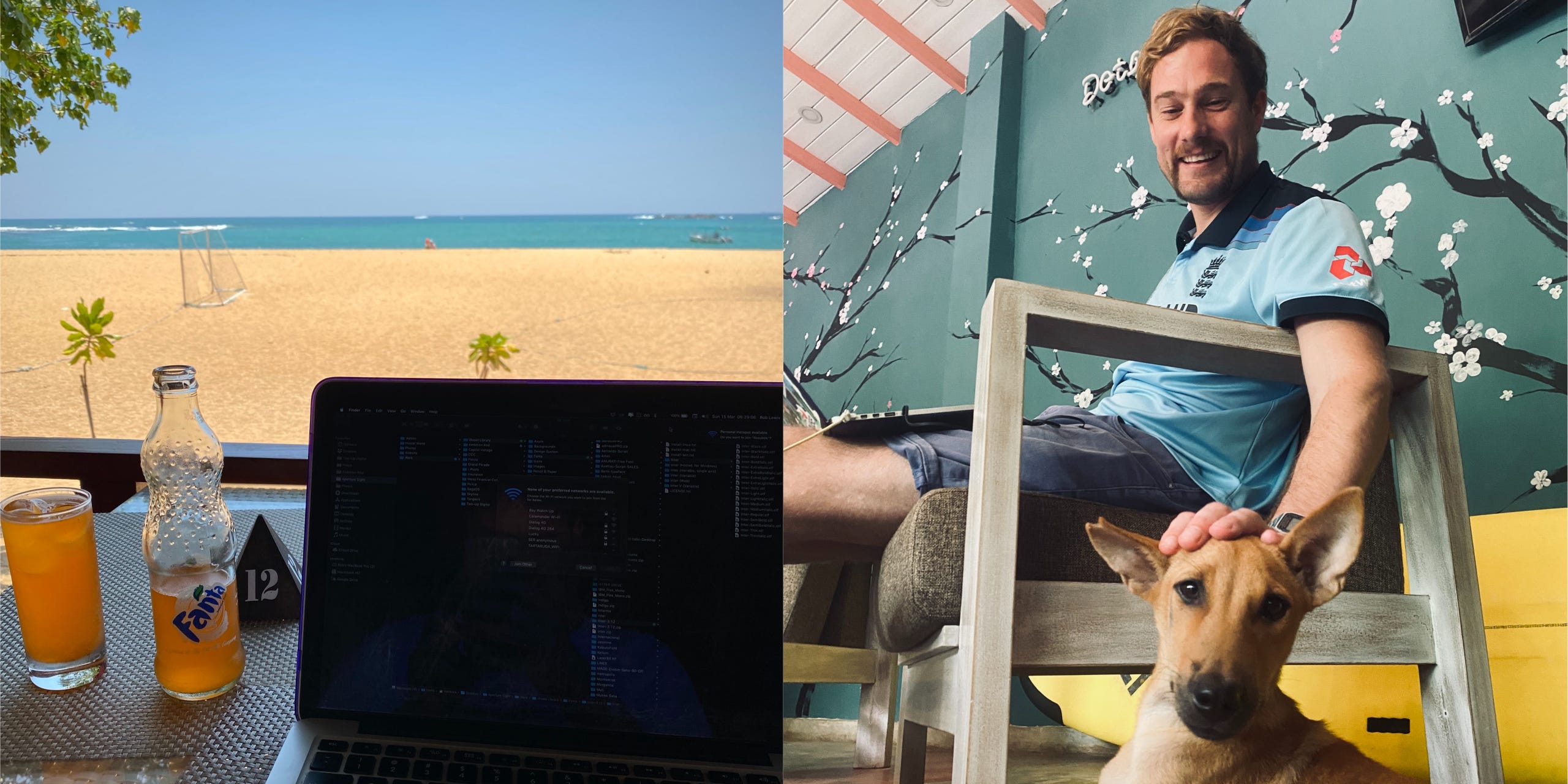 A cricket fan who travelled to Sri Lanka in March to watch England’s tour is still there eight months after it was cancelled – and has vowed to remain until Joe Root’s team returns.

Rob Lewis, a web designer from Sunbury-on-Thames, has been on a personal adventure during his unplanned stay in the island country, adopting a stray dog while living on a beach, becoming a DJ with his own alter ego, getting a tattoo and befriending members of the Sri Lanka cricket team’s coaching staff.

Now the 37-year-old is hoping England will return in January so he can finally see the cricket he travelled out for – and has offered his services to Sri Lanka coach Mickey Arthur as a waterboy in the hope he will be able to get into the ground even if fans are not allowed.

“I’m hoping on January for the cricket,” he told the PA news agency. “And if they don’t come then it’s been a long wait for nothing.

“Let’s just stay positive and hope that they come… or the little quest will fail and corona will win.”

Mr Lewis was on the plane to Sri Lanka when the announcement was made on March 13 that England’s matches in the country had been cancelled because of the coronavirus pandemic.

But rather than head back to England, he decided to remain in the country and has been there ever since.

When curfew came, Mr Lewis found himself staying in a hostel near Hiriketiya beach, east of Galle.

“It’s normally a really popular tourist beach and it was deserted,” he said. So I was swimming in the sea most days and had the whole beach to myself. It was insane.

“I was so fortunate – reports from back home, all my family are stuck in their houses, very hard lockdown, so I was pretty lucky.

“I was in touch with people back home and they were like, man, you’ve just got to stay there, because the UK is just completely shut up.”

While there, he also made a new friend.

“The hostel owner didn’t really like me because he didn’t want the dog in there.”

The dog has since been rehomed.

After a couple of months of lockdown, Mr Lewis said Sri Lanka opened up “pretty fast and life went back to normal”.

He added: “That’s when I had one of my stupid ideas in my head where I was just, like, well, is there any point going home or shall I just try and stay for England to return to Sri Lanka?”

While in Sri Lanka, Mr Lewis met a DJ who taught him how to operate the decks and – despite his lack of experience – managed to pick up some gigs at bars and parties.

“Twice I got kicked off because I just wasn’t good enough,” he said. “Or I was playing disco while they wanted this weird tech house stuff.

“But I’ve managed to get a few gigs in Colombo where I was on flyers, which has been super fun.”

He now DJs under the name DJ Randy Caddick – a nod to a former England bowler.

“If I do well, I’m going to have like a highlight reel of Andy Caddick playing behind me while I DJ.”

Thanks to an introduction from a mutual friend, Mr Lewis has also become friendly with some members of the Sri Lanka coaching team, including head coach Arthur, who was taken with his story.

“He was like, ‘you’ve been here for five months?’, and yet I was like, ‘yeah, I’m waiting for England to come back,” Mr Lewis said.

“He just laughed at my idiocy.”

Since the start of the pandemic, no international cricket has taken place in Sri Lanka.

Bangladesh’s proposed tour was cancelled because Sri Lankan health authorities insisted they must quarantine for 14 days in their hotel rooms on arrival with no access to training facilities.

But there is hope compromise can be reached for England’s proposed tour in January.

Even if England do tour, there is the small matter of whether Mr Lewis will be allowed into the ground.

He said: “I’m like, are there even going to be fans allowed in? I’ve been waiting all this time. But I’ve offered my services to be like the Sri Lankan waterboy so I can get in the bubble.”

This is not the first time Mr Lewis has found himself on an overseas adventure.

Last year he impulsively booked himself a last-minute flight to Japan to watch England in the Rugby World Cup final – despite having no ticket for the game, nowhere to stay and being on crutches after undergoing a knee operation.

Things worked out in his favour as he sourced a ticket for the match and even ended up receiving free accommodation.

This time he believes his adventurous nature has again been to his advantage, as he says the situation in Sri Lanka has largely been better than in the UK during the pandemic.

“Whether it be luck or you have to put yourself out there to get in these situations, I don’t really know, but I’m just trying to make the most of the situation.