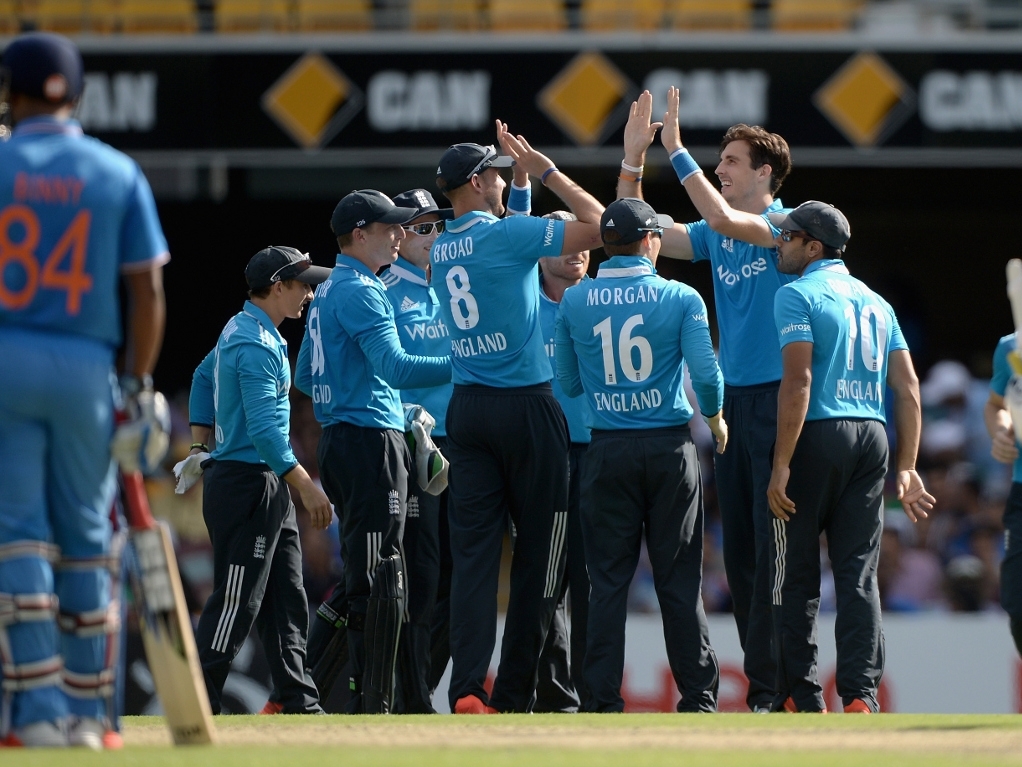 England cantered to a nine wicket victory over India in Brisbane to register their first win of the ODI tri-series, also involving host nation Australia.

Chasing a modest 154 for victory, England knocked off the runs in the 28th over thanks to unbeaten half-centuries from Ian Bell and James Taylor. Moeen Ali was the only wicket English wicket to fall, caught by Virat Kohli off the bowling of Stuart Binny, in the third over of the innings with the score on 25.

India will be very disappointed with their batting display after winning the toss and electing to bat on a surface which had no real demons in it.

Rohit Sharma, India's centurion from their defeat in their last match against Australia, pulled out of the match with a sore hamstring and India never seemed to get over the loss of the opener.

Tall England fast bowler Steve Finn recorded his best ODI figures of five for 33 in eight overs, as India could not cope with the pace and bounce that the Middlesex bowler extracted out of the Gabba pitch.

India were on the back foot early when Shikhar Dhawan edged seam bowler James Anderson to wicketkeeper Jos Buttler in the third over with only one run on the board.

Ambati Rayudu, who replaced the injured Rohit, and Ajinka Rahane put on 56 for the second wicket in 12 overs before Rahane became Finn's first victim, India 57 for two after 14.3 overs. Rayudu followed quickly thereafter also gone to  Finn, who now had his tail up.

Virat Kohli, arguably India's best batsman, will be disappointed with manner of his dismissal, guiding a short ball from Finn straight to Buttler who hung on greatfully. It was the kind of shot the fielding coach plays when giving catching practise to the keeper and slips in the warm-ups before a match starts.

When Suresh Raina ran past a sharp turning Moeen Ali delivery, he was stumped by Buttler, and at that point India were staring down a barrel at 67 for five after 19 overs.

India needed a partnership, a really big partnership, and captain MS Dhoni and allrounder Binny put on a fighting partnership of 70 for the sixth wicket, but they needed to bat deep into the innings, which they were unable to do. Dhoni and spinner Axar Patel were dismissed off successive Finn deliveries in the 37th over.

India's tail-enders offered no resistance, continuing a trend from the recently completed Test series against Australia, as they were bowled out in 39.3 overs.

Besides Finn, another returning fast bowler James Anderson snapped up four wickets for just 18 runs in eight overs, in what must have been a pleasing sight for the England management team.

In England's run chase, Binny , who surprisingly took the new ball for India, had Ali caught by Virat Kohli for eight to leave England at 25 for one. There were no more alarms as Bell, with 88 not out, and Taylor, with and unbeaten 56, pulled out all their shots as England, with one win from two matches played, go behind Australia on the tri-series log.