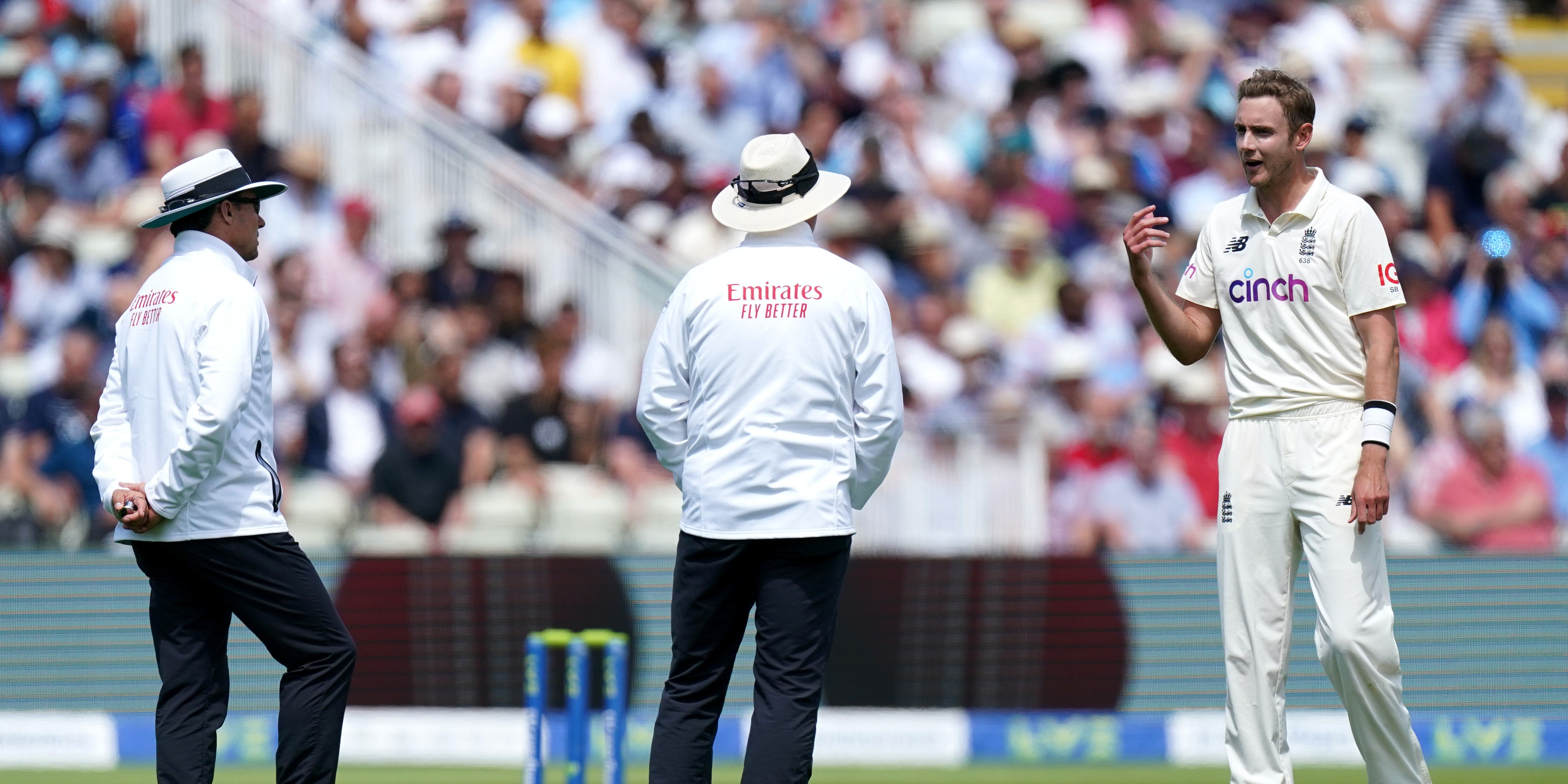 Bowling coach Jon Lewis admitted England were less than impressed by the decision to rule out an early New Zealand wicket as the Black Caps kept chances to a premium on day two of the second Test at Edgbaston.

The tourists would have been 32 for two in the 10th over had the on-field umpires given Devon Conway out when he edged Stuart Broad to third slip.

But there was enough uncertainty over Zak Crawley’s low take to call for third umpire Michael Gough to review the replays.

As soon as Richard Kettleborough gave a ‘soft signal’ in the batsman’s favour it was always likely to end in a reprieve, though the balance of doubt probably leaned in Broad’s favour.

Broad was visibly fuming, and made his position clear, but New Zealand were free to put on another 105 runs before Conway fell to the same combination for 80. A Joe Root drop from the bat of Will Young, would later cost England another 75 runs.

New Zealand lost only one further wicket before stumps, Young becoming part-time spinner Dan Lawrence’s first Test scalp in the final over, to close just 74 behind on 229 for three.

Lewis was sent out to speak for the team, with Broad perhaps wary of saying something that would invite further attention from father Chris, who is the ICC match referee.

“You could see from the reaction on the field they were clearly frustrated by that,” he said of the decision.

“It’s sport and it divides opinion. New Zealand will be happy, we will be frustrated. But the question really is, is the soft signal required? Should there be one, or could the guy off the field make the decision?

“You have to ask the question, is it necessary? Should you make life as easy as possible for the officials?”

Conway, who has taken to Test cricket like a natural after backing up a debut double century at Lord’s last week, was more than happy to lean on the existing protocols.

“It was a tricky period when that happened…I nicked it and looked back because I wasn’t 100 per cent sure if it did carry,” he said of the incident.

“I stood there to wait and see if the umpire was going to give me out and fortunately the ruling went my way. I’m pretty grateful it perhaps bounced in front of the fielder and I’m pretty happy I got another chance.

“We’ve got technology to prove whether guys catch it or if it dropped short, why not use the technology if we have it?”

Broad’s annoyance at being denied was the only minor blemish on a day where he was comfortably the pick of the bowlers and also managed to nip past West Indian great Courtney Walsh to stand alone as the sixth highest wicket-taker in Test history.

He nipped out Tom Latham and Conway, eventually, to move to 520 career scalps and might have deserved more than figures of two for 22 from 15 classy overs.

“He was outstanding, he bowled fantastically well, really put in a shift for the whole time and showed the way for the other guys.”

Lawrence had started the day by finishing 81 not out, prevented from making a first century but later stepping up to take a maiden Test wicket instead.

“It was a real bonus wicket,” Lewis added.

“It will make our lives a little bit easier and gives us someone fresh to bowl at.”