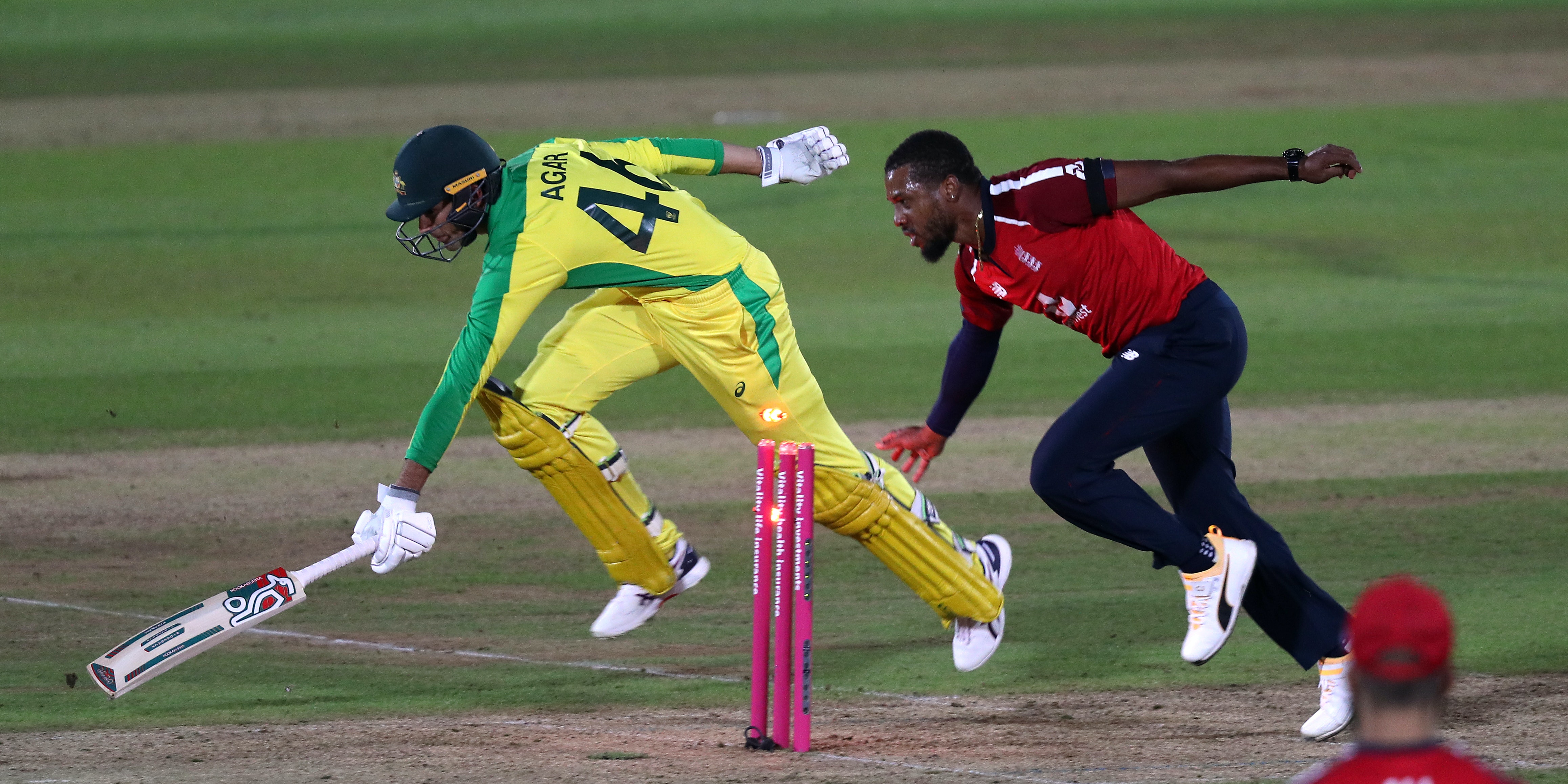 England fought back impressively with the ball to beat Australia by two runs in a thrilling Twenty20 international at the Ageas Bowl to move one up in the three-match series.

Aaron Finch’s side looked set to chase down 163 when he was going well alongside David Warner, but Jofra Archer dismissed the opening duo and four wickets for only nine runs turned the tie around.

With 15 needed off the last over, Tom Curran restricted Australia to 12 and it made Dawid Malan’s 66 earlier in the day even more crucial.

The Yorkshire batsman helped rescue England’s cause after Jos Buttler had crunched 44 in rapid time before a collapse left them struggling on 108 for five.

Malan stuck around and reached fifty for the eighth time in his short T20 career to help his team post 162 for seven before Eoin Morgan’s bowlers recovered from a poor start to hold their nerve at the death.

Australia won the toss and bowled first with Buttler, Archer and Mark Wood returning to play white-ball cricket for the first time this summer after previously being part of the bio-secure Test bubble.

It was Buttler’s first T20 match since February but it was like he had never been away as he smashed Ashton Agar for two maximums in the second over.

Mitchell Starc suffered similar punishment, with the England opener finding the boundary twice more to move onto 35 from 15 balls.

But after Buttler’s scoring slowed, he tamely picked out Pat Cummins at mid-wicket to go for 44 and give Agar some revenge and fellow opener Jonny Bairstow was already back in the pavilion by this point.

After being 62 for one, England went on to lose four wickets for 44 runs with Tom Banton, Morgan and Moeen Ali all going cheaply and the latter duo out to Glenn Maxwell, who would finish with two for 14 on his return to the white-ball side.

Malan remained unflustered and after biding his time, upped the ante against Adam Zampa, hitting his final over for 22 to move to his seventh half-century in T20 internationals.

The Yorkshire batsman could not go beyond 66 and was out when Steve Smith ran in to take a fine catch at long-off.

Kane Richardson secured the key wicket and ended with two for 13, but Chris Jordan hit four from England’s last ball to finish on 14 not out and set Australia 163 to win.

A lack of wickets in the powerplay overs had been a recent problem for Morgan’s side and even Archer and Wood’s return could not change their fortunes in that department.

Both were hit out of the attack by Warner and Finch, but Curran did briefly stem the flow of runs when he was introduced.

Adil Rashid’s first over only went for five and yet his second saw Australia’s captain slog-swept through mid-wicket for six before he collected back-to-back boundaries with a couple of drives through extra cover.

England needed to make the breakthrough and Morgan turned to Archer, who delivered when Finch could not get enough on an uppish drive and found Jordan at mid-off to exit for 46.

Warner succeeded where his fellow opener failed by going through to his 18th half-century in T20 internationals.

Smith was at the other end now and despite using his feet well to hit Moeen for a six through mid-wicket, he was out for 18 after a top edge was well taken by Bairstow.

Rashid claimed the wicket and finished with two for 29 after Maxwell crunched a drive straight to Morgan.

When Warner played on for 58 off Archer, Australia were reeling and the collapse continued as Wood bowled Alex Carey in a spell where four wickets were taken in 14 balls at the expense of only nine runs.

The onus was on Marcus Stoinis and Agar to get the remaining 30 runs, but they were struggling under the floodlights and England had the upper hand after Jordan ran out Agar at the end of the penultimate over.

With 15 needed, Stoinis crunched Curran’s second ball for six, but held his nerve to secure victory by two runs in a thriller against Australia.