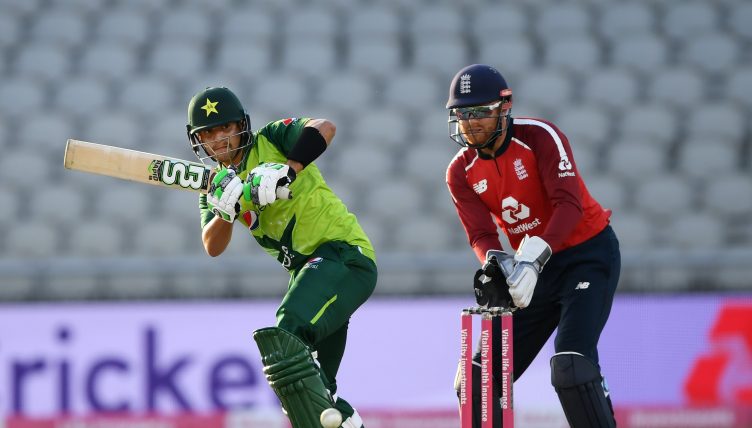 England have been set 191 to seal a sixth Twenty20 international series victory in a row after fifties from teenage Pakistan debutant Haider Ali and veteran Mohammad Hafeez at Emirates Old Trafford.

Pressed into action against an unchanged England – leading 1-0 in the series – Haider, 19, marked his international bow with a terrific 54 from 33 balls to underline his reputation as one of his country’s brightest prospects.

Hafeez, 20 years Haider’s senior, registered his second consecutive half-century and finished on 86 not out – equalling his career-best for Pakistan in this format – as the tourists finished on 190 for four.

England’s bowlers were occasionally guilty of feeding the leg-side habits of Pakistan’s star duo, who exploited the shorter boundary on a fresh pitch, where Chris Jordan was the pick of the bowlers with two for 29 after the hosts had won the toss in this third and final T20.

England have recently struggled to take wickets in the powerplay but Moeen Ali made the breakthrough in the second over, his first ball skidding on to castle Fakhar Zaman. Later in the over, Haider clubbed his second ball for six.

Babar Azam took three successive fours off Saqib Mahmood, showing his power for the first two before a delicate dab down to the third man boundary but the Pakistan captain went for 21 after missing a flat-footed drive at Tom Curran.

Haider showed his quick wrists off Curran and Jordan either side of an inside edge for another four off the latter to lead the Pakistan recovery as the tourists reached 47 for two after six overs.

Haider greeted Lewis Gregory’s introduction with a towering six over midwicket although in the seamer’s next over, the teenager’s muscly pull just cleared the leaping Sam Billings at the longer deep midwicket boundary.

Hafeez had been happy to defer to Haider but he slog-swept Adil Rashid for back-to-back maximums to take Pakistan to three figures after 11 overs.

Haider became the first Pakistan batsman to make a half-century on debut – doing so with another mighty pull for four that bisected the deep square-leg and deep midwicket fielders.

Hafeez took advantage of the shorter boundary when Curran came back into the attack, clearing it before hammering Rashid straight down the ground for his fourth six en route to a 31-ball half-century.

The dangerous partnership between Haider and Hafeez had reached exactly 100 when Jordan’s pinpoint yorker uprooted the youngster’s off-stump, ending a sparkling innings.

Hafeez thumped sixes off Curran and then Jordan, who saw Morgan drop a diving catch to reprieve the set batsman on 79 although Shadab Khan (15) had no such luck later in the over after driving to Curran at mid-off.

From the next ball, and with the floodlights by now in full effect, Curran reprieved Imad Wasim after shelling a chance running in from long-on.

Hafeez equalled his career-best in T20 internationals as Pakistan reached a total that is five runs fewer than they managed on Sunday, which England chased down.