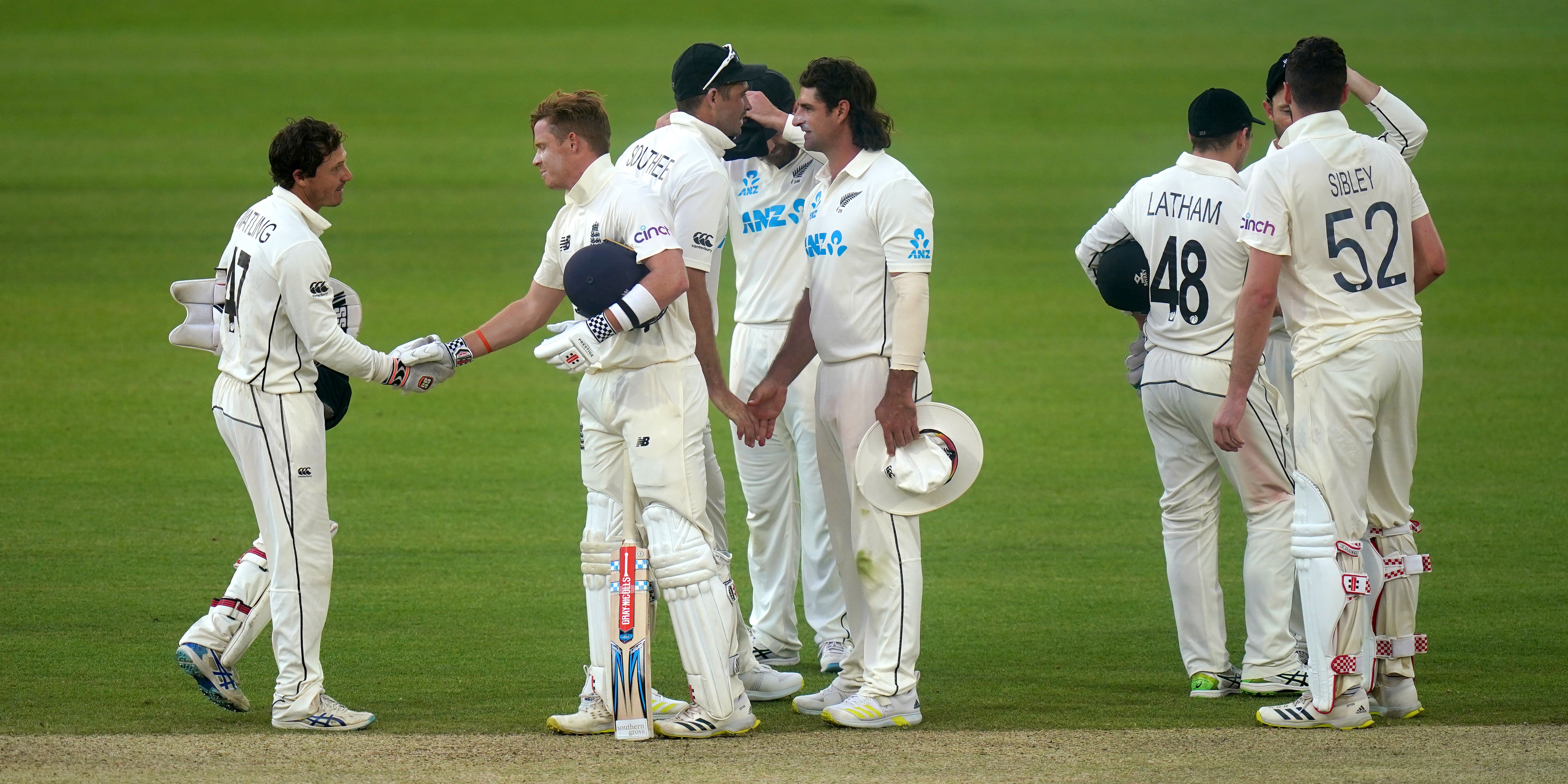 England erred on the side of caution after being invited to chase down 273 in 75 overs against New Zealand, deciding against pursuing the win as the first Test at Lord’s ended in a draw.

New Zealand had set the game up on the final day by advancing their overnight 62 for two to 169 for six for a lead of 272, with Kane Williamson hopeful of tempting England in the final two sessions by declaring during lunch.

But a grandstand finish failed to materialise, with England defending resolutely in the face of some challenging bowling from New Zealand’s seamers on Sunday afternoon, meaning the teams head to Edgbaston next week all square.

Joe Root had been eyeing a clean sweep in this summer’s seven Tests – two against the Kiwis and five versus India – but his knock of 40 in an important 80-run stand with Dom Sibley went a long way to guaranteeing a stalemate.

That was agreed after England had trickled to 170 for three in 70 overs, with Sibley steadily growing in confidence after taking 20 balls to get off the mark to finish on an obdurate 60 not out from 207 deliveries.

First-innings centurion Rory Burns had earlier edged the deeply impressive Neil Wagner to slip for 25 while Zak Crawley had a flat-footed waft to depart for two, but Sibley and Root frustrated the Black Caps in a safety-first approach that was perhaps somewhat well-reasoned given England’s middle-order collapse earlier in the weekend.

Burns crowned his England recall with a tenacious knock of 132 in the first innings, when his opening partner Sibley was dismissed for a duck. Having not reached double figures in his six most recent attempts, Sibley was under pressure on Sunday afternoon and he was given a thorough examination early on by Kyle Jamieson. He played and missed a couple of times, an outside edge dropped short of the slips and he was struck on the elbow – all while he was on nought. But Sibley stayed calm and got off a pair with a flick off his hips off Tim Southee for four. While it was not plain sailing for the rest of the day, he kept to his task manfully and deserved to walk off unbeaten.

Stuart Broad, the stand-in vice-captain for this Test in the absence of the injured Ben Stokes and rested Jos Buttler, would be forgiven for not looking back on the last few days very fondly. He went wicketless in the first innings despite bowling well and seemed set for another frustrating day on Sunday when Zak Crawley put down a catch, diving to his right at midwicket, to reprieve Tom Latham. It has been a lean period for Broad, who understandably did not fare very well in India, but he kept plugging away and after 487 wicketless deliveries, he trapped Latham in front – the ball just clipping the stumps, according to Hawkeye. The usually upbeat Broad looked more relieved than elated.

There was a little consternation when Williamson opted not to shake hands with Sibley and Ollie Pope at the earliest opportunity, with England three wickets down and only 15 overs left in the day. He probably sensed one wicket could lead to the floodgates opening and he might have been wanting to get as much middle practice ahead of their World Test Championship final against India at the Ageas Bowl later this month. But this Test is likely to be the last at Lord’s for a number of Black Caps players, including Ross Taylor, Neil Wagner, Southee and perhaps even Williamson himself. It has been six years since New Zealand were last here in whites, so who could blame Williamson if his decision to stay out for as long as possible was at least partly motivated by wanting to soak in the atmosphere at the Home of Cricket one last time?