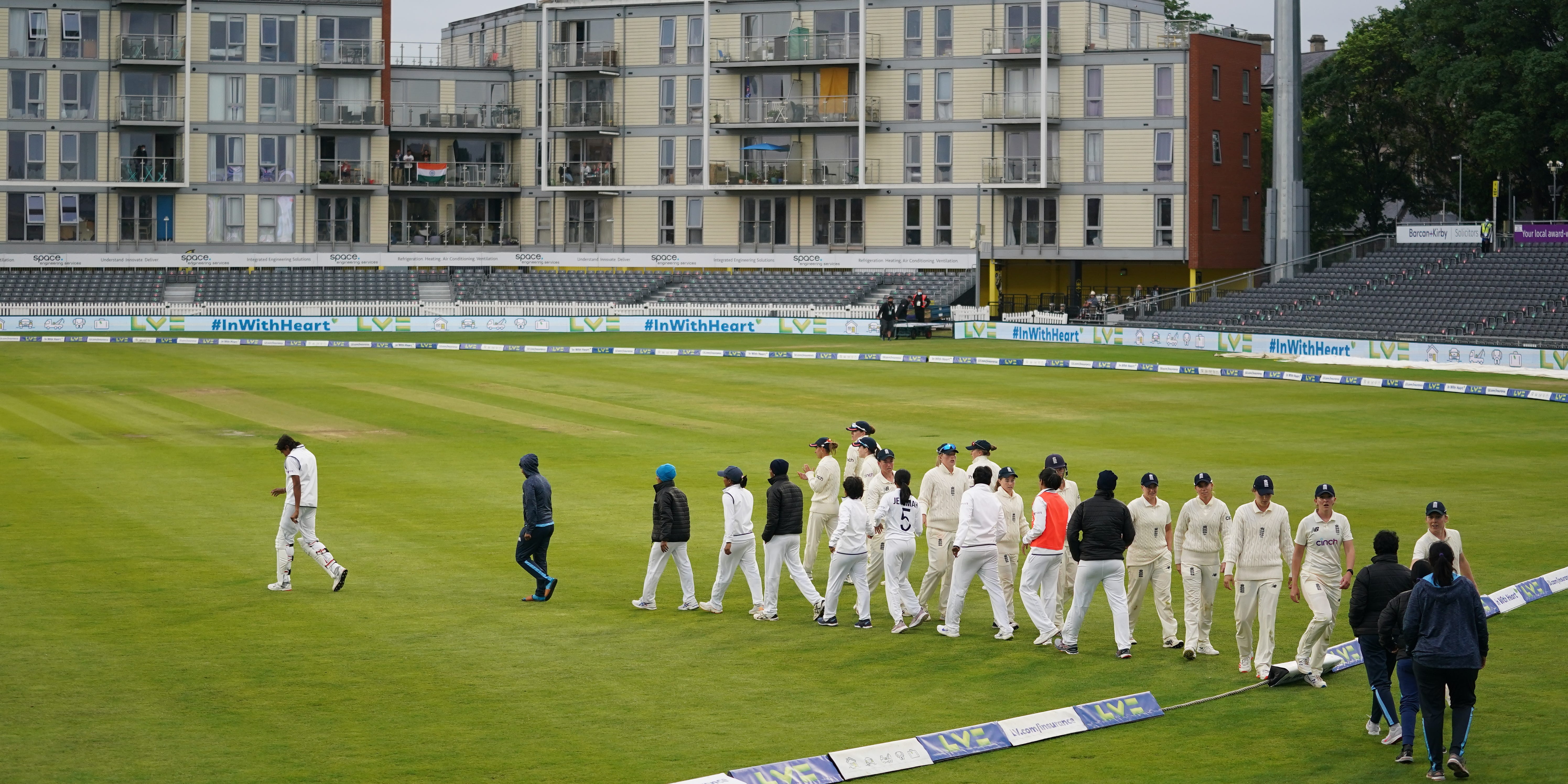 India Women’s lower order scuppered England’s chances of a first Test victory on home soil since 2005 as the two nations played out a draw at the Bristol County Ground.

A tremendous 104-run partnership for the ninth wicket between Sneh Rana and Taniya Bhatia secured the draw for the visitors, with England unable to break through and start a run chase on the final day.

The game was brought to a close with 12 overs left as the players shook for the draw with India on 344 for eight in their second innings and leading by 179 runs. Both sides took two points each from the one-off Test.

Rana had scored just two runs in the first innings but crucially found her form in the second, top-scoring with an unbeaten 80 from 154 balls, while her partner Bhatia finished not out on 44.

Rana resolutely blocked out before increasing the total to put the game beyond a target the hosts could have realistically chased.

It was a very composed innings from the number eight who, alongside Bhatia, put the game beyond Heather Knight’s side’s reach.

Although the wicket offered very little in terms of pace or lateral movement from the pitch, England’s seam attack was not varied.

Nat Sciver, Katherine Brunt, Anya Shrubsole and Kate Cross are all right-arm bowlers who, for the most part, bowl between 62 and 68 mph, without the variation to give a new test for the Indian bowlers.

Sciver, when she bowled it short, was more than a match for Punam Raut who picked out Sophie Ecclestone at square leg in a good spell for the seamer, but later in the day she was unable to break through the crucial stand.

Arguably England’s most likely bowler to take wickets, Ecclestone was also the home side’s most used, with 38 overs in the second innings to go with 26 from the first.

She earned the England captain’s praises when Knight said: “Soph’s fine, she’s got a very simple repeatable action and was able to bowl a lot of overs. I think she performed outstandingly.”

The burden on Ecclestone was a lot to put on the 22-year-old, and England might have benefited from another front-line spinner to choose from with the wicket offering little to the fast bowlers.

When asked about the selection of another spin option, Knight said: “Potentially in hindsight we would have benefited from a second spinner maybe, but we went for that extra batting spot and we went for the best five bowlers that we thought would take us 20 wickets.”