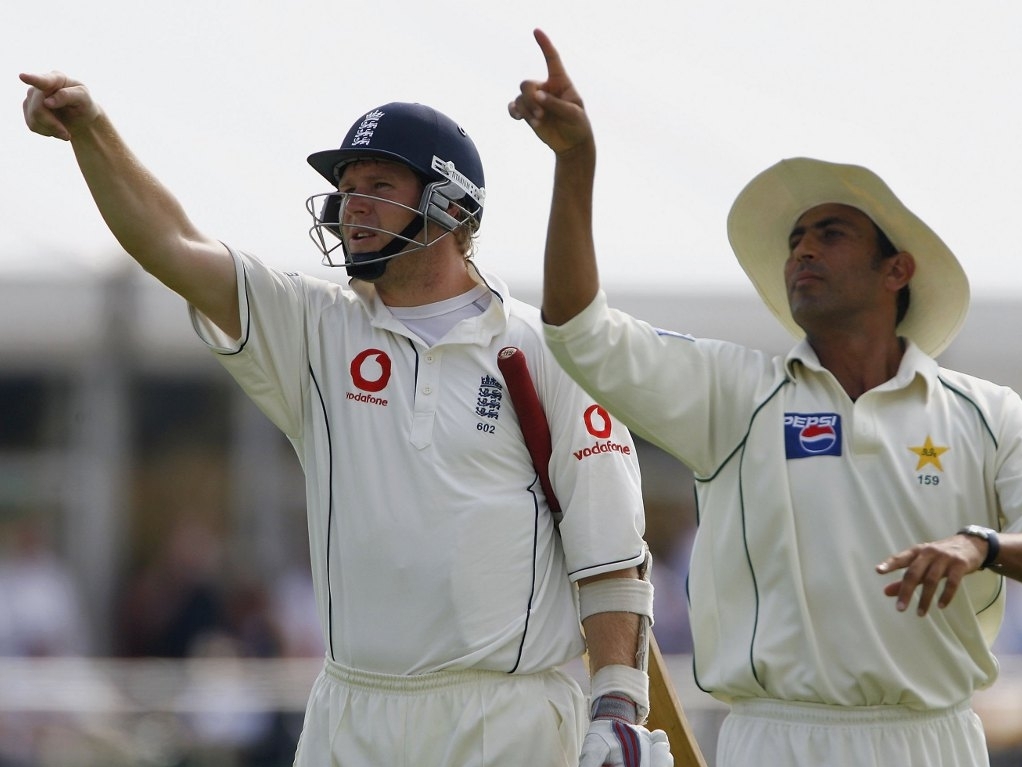 With the second Test between England and Pakistan taking place at Old Trafford in Manchester, with the visitors leading the series, we take a look at five previous Test matches between the sides at the ground.

England came to Old Trafford with a 1-0 lead in the four-match series following a comprehensive innings victory in the second Test at Nottingham. However, the typically soggy British weather would ultimately ensure that no result would be possible in Manchester.

Denis Compton, grandfather of recent England international, Nick, top-scored with a mighty knock of 93 to help England to a very respectable first innings total of 359-8dec; and as conditions turned favourably toward to the England bowlers, Pakistan were restricted 25-4 in the follow-on after being skittled out in their first innings for just 90.

The torrential rain, though, came to Pakistan's rescue and the fourth and fifth days were declared a wash-out.

Almost 33 years later and still nothing changes: the rain wreaks havoc once again and the players are only able to take to the field for a grand total of 14 hours over the five-day Test.

The crowd were treated to a mammoth 166 from opener Tim Robinson, who recorded his fourth Test century as England posted a daunting first innings score of 447 all-out.

By the end of day three, Pakistan were reeling on 93-3 and needed to reach 248 to avoid the follow-on. Those worries were soon eased by Mother Nature, with only 26 overs possible on day four and none whatsoever on the final day. Crisis avoided.

As drawn Test matches go, this one was pretty memorable. Umpire Roy Palmer was involved in a incident with Aqib Javed and Pakistan captain Javed Miandad, which culminated in argument over a sweater and a Pakistan fan, holding a rolled-up newspaper, being chased off the pitch by two security guards.

The actual cricket was pretty good, too. Aamer Sohail's awesome 205 at the top of the Pakistan order saw the tourists declare on 505-9, while the recalled David Gower (73) became England's most prolific run-scorer of all-time in their reply of 390. The legendary Wasim Akram also carved his name onto the honours board with bowling figures of 5-128.

Pakistan, who already had a 1-0 series lead, were cautious in their second innings on the final day, eventually declaring on 239-5 after a draw was conceded.

With only a two-match series on the schedule, Pakistan had to win at Old Trafford in order to draw the series – and they did so in dramatic style.

England were cruising to a draw after reaching 196-2 at tea on the last day, but an almighty collapse in the final session saw Pakistan record the most unlikeliest of wins.

Four England batsmen were dismissed by no balls which the umpires failed to give, as all eight wickets tumbled in quick succession to the delight of the horn-blowing Pakistan fans.

The disastrous defeat meant that England had only won once at Old Trafford since 1981 and were denied a fifth consecutive series win for the first time in 30 years.

England's most recent Test clash against Pakistan at Old Trafford will bring the happiest memories.

Steve Harmison's spell-binding figures of 6-19 limited Pakistan in their first innings to 119 and in response, Alastair Cook (127) and Ian Bell (106) both recorded their second Test centuries in a row as England piled on the runs before declaring on 461-9.

Pakistan showed brief signs of resistance in the second innings, but Harmison bagged another five-for to finish with match figures of 11-76 and Monty Panesar further established himself as a real fans' favourite with 5-72 as Pakistan perished for 222 all-out.

Result: England won by an innings and 120 runs