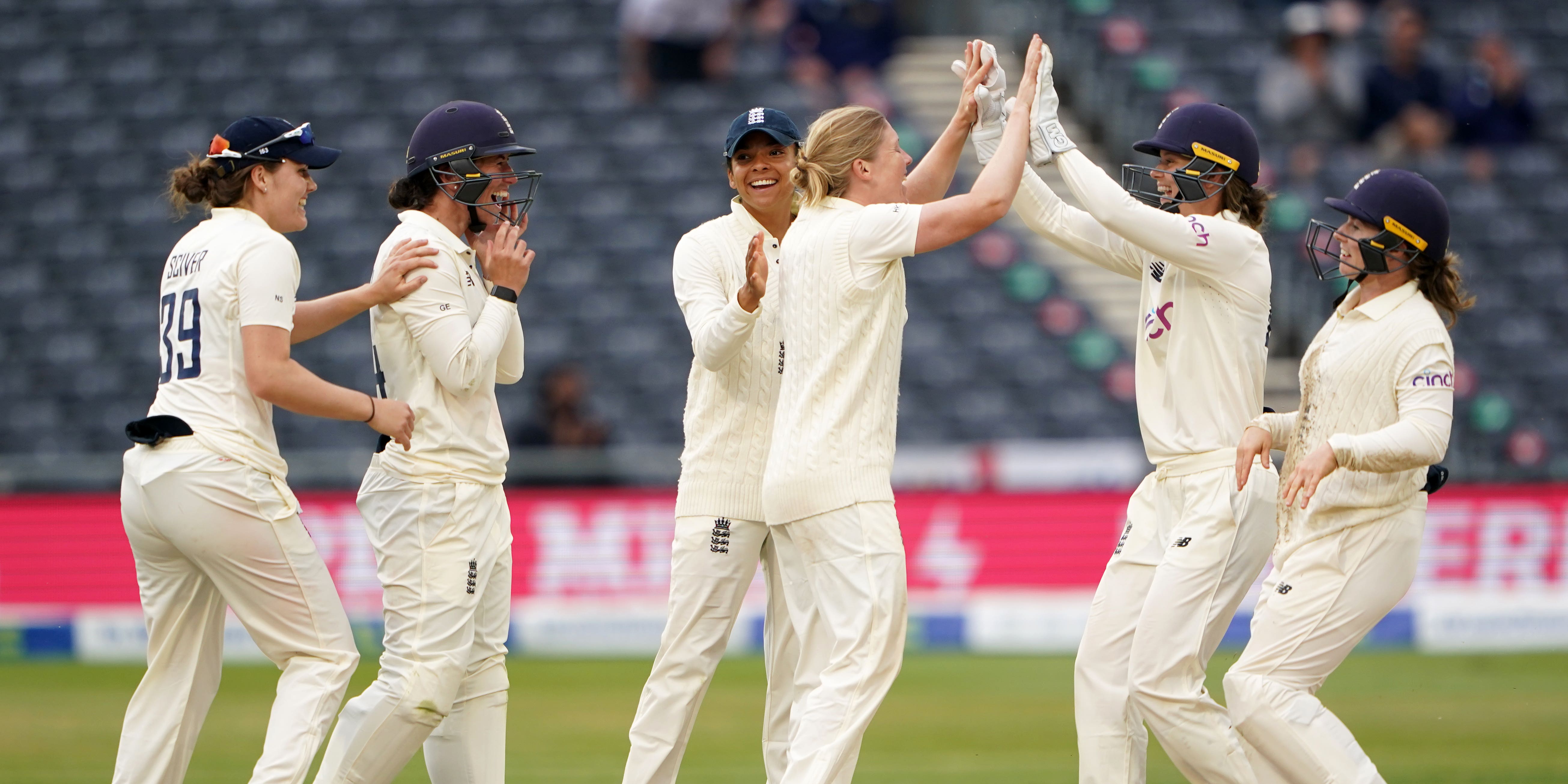 England Women claimed a late flurry of wickets as they ended day two of the only Test with a 209-run lead over India in Bristol.

The hosts had declared on 396 for nine before taking five wickets for just 16 runs in the final 45 minutes of play as India slipped from 167 without loss to 187 for five at stumps.

Seventeen-year-old Shafali Verma was within a shot of a momentous century for India when she mistimed a drive over the top and picked out Anya Shrubsole at mid-off for 96 on her Test debut – the first of the five wickets to fall.

Sophia Dunkley, who became the first black woman to play Test cricket for England on the opening day, showed no signs of inexperience as she brought up her half-century in the morning session, and was 74 not out when Heather Knight declared in the afternoon.

The 22-year-old had been dropped on 27 and successfully overturned an lbw decision on 46, before bringing up her maiden Test fifty just before lunch.

Just as India looked to be settling into a rhythm, England finished with a flourish, with captain Knight claiming two wickets for only one run from six impressive overs.

It was a crucial late fightback for England as India had looked comfortable going into the final hour of the day.

India started the day with a wicket in only the second over. After an Indian review, the on-field decision was overturned and Katherine Brunt was given out lbw for eight leaving the hosts on 270 for seven.

Dunkley started brightly and there was a second player review against Sophie Ecclestone, although this time India were not successful, with DRS showing the ball going over the stumps.

All-rounder Dunkley then brought up her half-century in the morning session, becoming the 10th woman to reach the milestone on their Test debut for England.

Ecclestone had just successfully overturned an lbw review when she chipped the ball straight to mid-on for 17.

After an entertaining innings from Shrubsole, who added 47 from 33 deliveries including an over from Sneh Rana which went for 18, Knight declared with England just short of the 400 milestone.

India got off to a solid start after the declaration, as England’s bowlers struggled to find movement after the first few overs.

Verma was the standout, with her 96 runs coming from 152 deliveries, including 13 fours and two impressive sixes before being caught off the bowling of Kate Cross.

The youngster was first called up to the India squad aged 15, but this was her first chance to face the red ball having been just 10 years old when her country played their last Test match.

India’s other opener, Smriti Mandhana looked composed for her 78 from 155, before being caught by Brunt in similar fashion to Verma, from the bowling of Nat Sciver.

Just before the close of play, Knight caught and bowled Shikha Pandey before a clever catch from Tammy Beaumont from Ecclestone’s bowling dismissed India captain Mithali Raj for just two, after a successful England review.

The hosts then claimed their final wicket of the day when Punam Raut was trapped lbw by the England captain.