England on track for worst batting display in 131 years 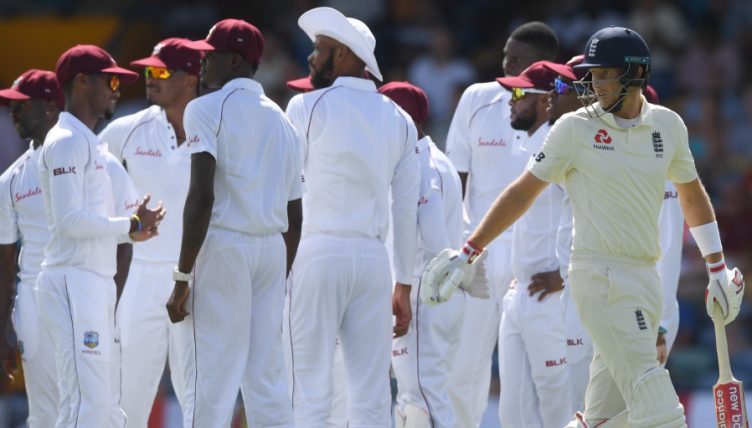 England’s batting woes in their Test series in the West Indies have seen them average barely 16 runs per wicket – on course for their lowest mark in 131 years.

Totals of 77, 246, 187 and 132 have seen England beaten by 381 runs in the first Test and 10 wickets in the second, leaving them playing merely to salvage some pride in the third and final match.

The resulting average score of 16.05 per wicket is less than half the Windies’ average of 39.50, while only twice have England averaged less per wicket in a series of more than one Test.

This is on track to be a historically bad series for England, beaten only by efforts from the 19th century when the game was very different – indeed, no series from the 20th century makes the current top five…

England actually won both of these low-scoring Ashes series in the late 1880s, a very different and markedly lower-scoring era. Being skittled for 45 in the first innings of the first Test didn’t help the overall figure, but they failed to surpass 200 in any of their four innings and no England batsman made more than 82 runs in total.

A second innings of 184 was enough for an opening 13-run win as Billy Barnes took six for 28 off 46 overs to bowl Australia out for 97, while the tourists won the second Test by 71 runs with scores of 151 and 154 thanks to George Lohmann’s eight for 35.

England were routed for 53 and 62 at Lord’s, losing by 61 runs, but recovered to win each of the two remaining Tests by an innings.

They responded to Australia’s 80 all out at the Oval with 317 – Barnes and Lohmann with 62 apiece to add to Bobby Abel’s 70 – before bowling the tourists out again for 100. A single innings of 172 then proved sufficient at Old Trafford, with Australia dismissed for 81 and 70.

Bobby Peel took 24 wickets at 7.54, with Lohmann the only England bowler not to average in single figures, but Barnes was the series’ leading run-scorer with just 90 in four innings.

England's overall average runs per wicket in the current series against the Windies of 16.05 is their sixth lowest in any series in history and their third lowest when they've played more than one Test. #WIvENG pic.twitter.com/sJQX9CGu0W

Kemar Roach took five for 17 to bowl England out for 77 in Barbados and set the tone but unlike the 19th-century battles elsewhere on this list, there were runs to be had – the hosts had made 289 in their first innings and captain Jason Holder scored 202 not out to lead them to 415 for six declared second time around. Eight wickets for Roston Chase wrapped up victory.

England then subsided for 187 in Antigua, Roach taking four for 30. The Windies made 306 and England limped to 132 to narrowly avoid an innings defeat, but they have made only three half-centuries and only Jonny Bairstow and Rory Burns have over 100 total runs. Moeen Ali hit 60 in the first innings in Antigua but has 64 from four innings overall.

Another product of its era, the 1890 Ashes series saw England chase 136 for a seven-wicket win at Lord’s before a low-scoring thriller at the Oval.

Australia made 92 and 102, with England’s 100 in the first innings leaving them to chase 95. They did so successfully… with just two wickets to spare. Australia’s John Lyons was the only batsman to pass 100 runs for the series, which featured only four half-centuries by either team.

The spinning pitches of the United Arab Emirates saw England’s batsmen bamboozled in a memorable 3-0 whitewash, though even then their average per wicket was fully three runs higher than in the current Caribbean series.