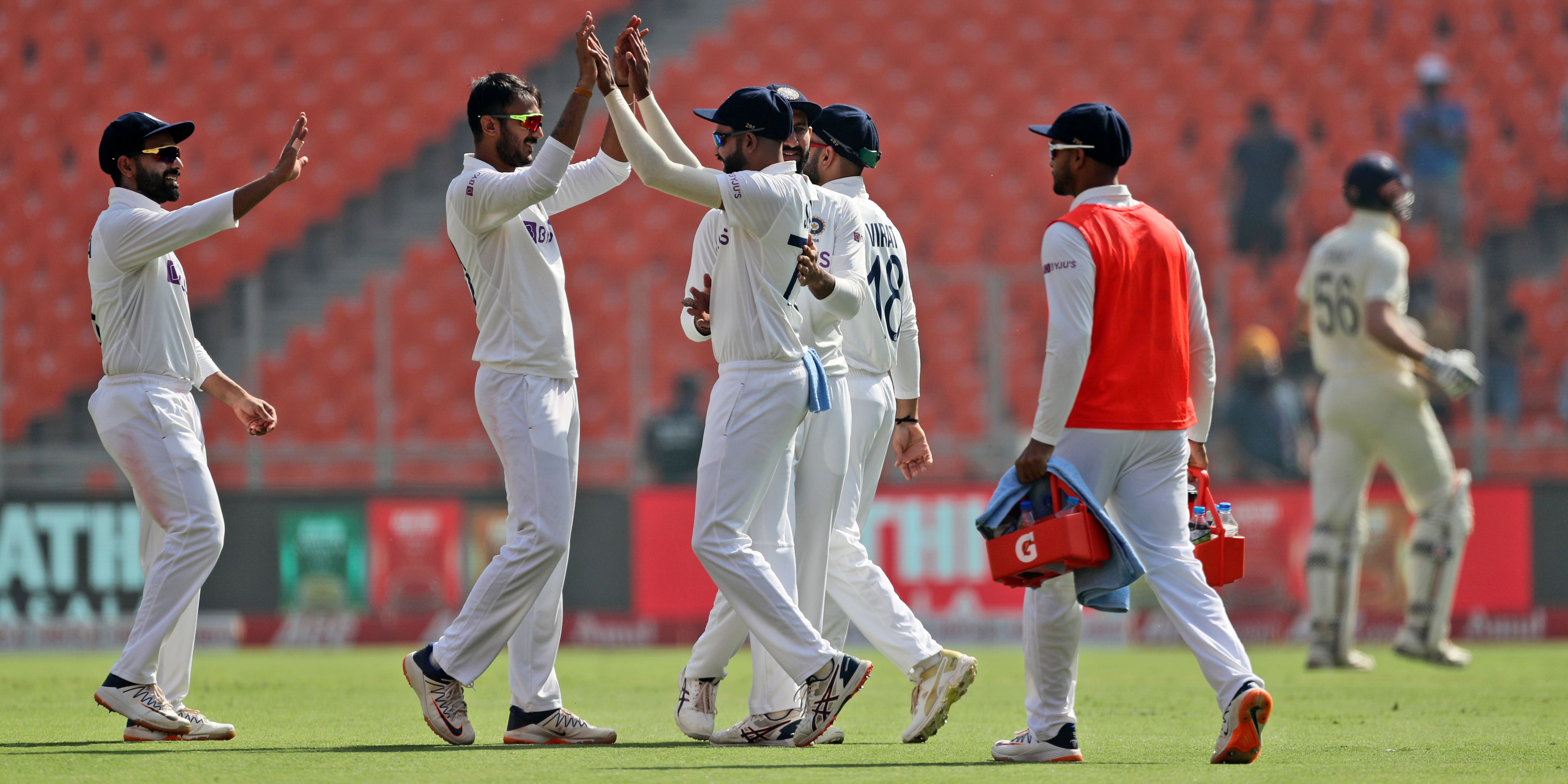 After two heavy defeats on rampant turners, England could only blame themselves as they surrendered the initiative with another muddled batting performance on day one of the fourth Test against India.

The tourists were dismissed for 205 – their best score since the first innings of the first Test but well below a par effort – before India reached 24 for one in response in the series decider.

Much of the time since last week’s two-day defeat at the same ground in Ahmedabad has been filled with debate around the state of the pitch, but there was nothing untoward from this surface.

Instead England must look to fine, persistent bowling and more human error at the crease.

Good fortune appeared to be with them when Joe Root won the toss in what were likely to be the best run-making conditions of the match, not least because they had sprung a major surprise with their team selection.

While the return of Dom Bess as second spinner had been telegraphed by the admission that they had misread conditions in the previous match, the decision to add Dan Lawrence as a specialist batsman at number seven was an entirely riskier – albeit more creative – response to being 2-1 down.

It left 38-year-old James Anderson as a lone frontline seamer and he would have loved to spend all three sessions with his feet up. From the moment Root’s dismissal left England 30 for three, that looked a forlorn hope.

There were pockets of resistance. Ben Stokes top-scored with 55 in an innings that balanced control with tantalising flashes of power, in defiance of an upset stomach, and Lawrence partially justified his recall in an unexpected role with 46.

But for the most part it was a familiar story of misjudged shots, lbws and wasted opportunities. When Jack Leach was last man out in the 76th over, England’s best chance of setting up the game went with him.

In the end eight of the 10 wickets fell to spin as two familiar foes, Ravichandran Ashwin and Axar Patel, continued to poke holes in their opponents’ technique.

The new ball swung and seamed but it took Virat Kohli just five overs to call for Patel, who continued his revelatory maiden series by seeing off Dom Sibley for two with his second delivery.

It was his favoured arm ball that did the work, skidding off the inside edge and through a yawning gap to hit middle.

Zak Crawley had settled on a more aggressive approach but could not make it work, charging the first ball of Patel’s next over and hoisting a high catch to mid-off. The questions Patel was asking were well known but the answers remained elusive.

Mohammed Siraj did well to leverage some handy movement off the seam, rapping Root on the back foot with the first ball after drinks to turn a worrying start for England into a troubling one.

Jonny Bairstow and Stokes proceeded to emerge from a sticky start, a couple of false shots, to pepper the boundary ropes.

India’s lengths suffered as the pair settled and when Stokes greeted his nemesis, Aswhin, by launching him for six down the ground it seemed a big statement before lunch.

But Siraj ended the partnership on 48, jagging one in to Bairstow’s pads to strike shortly after the restart.

Stokes had been involved in a terse exchange with Kohli early in his stay and it seemed to have had the desired effect.

A second six off Washington Sundar and a reverse sweep for four carried him to his half-century and left the bowler seeking revenge. He got it when he skidded one through from round the wicket, trapping a static Stokes in front of leg stump.

England needed their reinforced middle order to rescue them and though there was grit from Ollie Pope (29 from 87 balls) and some plucky hitting from Lawrence, who helped himself to eight boundaries, it was not enough to rescue things.

Pope was caught via a fluke flick off the back pad and Lawrence was stumped as he looked for a flashy route to 50.

The spinners finished off the tail unfussily, leaving Patel with four for 68 and Ashwin three for 47 at the change of innings.

With a throng of seamers on drinks duty, England badly needed a strong show from Anderson.

He obliged with minimal delay, setting up Shubman Gill with two away swingers then picking him up lbw when he went for the stumps.

Stokes took on new-ball duties and there was a brief look at Bess and Leach but there were no further mis-steps for India as Rohit Sharma and Cheteshwar Pujara kept them on top at stumps.