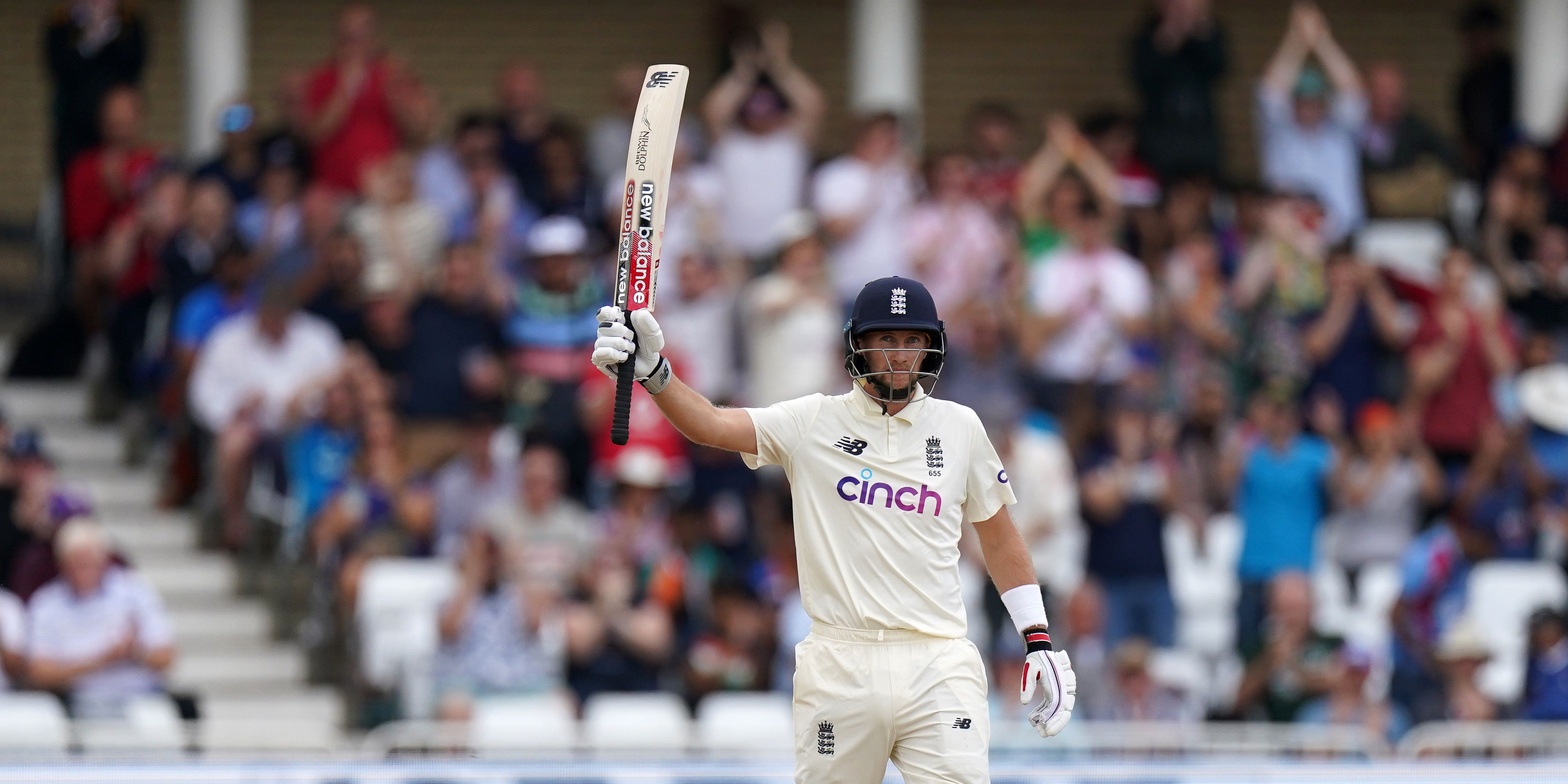 Joe Root was four runs away from a memorable captain’s century as he dragged England back into contention on day four of the first LV= Insurance Test against India at Trent Bridge.

England took tea at 235 for five, a handy lead of 140, but India’s ability to chip away regular wickets left them in a healthy position too.

Root’s side have been up against it since being bowled out for 183 on the first day at Trent Bridge and racked up a 95-run first-innings deficit, but a superb knock of 96 not out went a long way to clawing back the lost initiative.

Root arrived with pressure mounting, Rory Burns and Zak Crawley having both fallen in the first half-hour and England still 49 adrift. He came through some trying moments, scoring at an exuberant rate throughout his stay and piling up a proud collection of handsome cover drives.

Dom Sibley offered the most significant support, grinding through 133 balls for a stoic 28 but he will have been disappointed with the manner of his departure. Both Jonny Bairstow and Dan Lawrence offered more excitement but breezy knocks of 30 and 25 were not quite what the cause required.

India began their work well with a couple of early wickets, Burns unable to do anything other than edge Mohammed Siraj when he got one to shape away from an attacking line and Crawley adding yet another cheap dismissal to his growing collection. Attempting to block Jasprit Bumrah on six, he was only able to feed a catch behind.

At 46 for two, England were still 49 behind and needed something substantial to stop the rot. Root and Sibley provided it with a partnership of 89, starting with Root’s first scoring shot – a beautiful cover driven four off Bumrah.

The seamer was close to exacting revenge before Root was out of single figures, a near drag on and an edge that died inches in front of first slip both giving a timely warning. But Root was undeterred, unfurling a few more pretty blows through the covers and quickly overtaking Sibley, despite the latter’s 51-ball head start.

Things were beginning to turn in England’s favour, with a couple of run-out chances untaken and Sibley successfully overturning an lbw decision on 24, a verdict which left Root punching the air in delight.

A set of four byes drew the scores level and a typical nudged single from Sibley began the job of building a lead. The onus was on Root to do so and he had the means to oblige, leaning back and steering Mohammed Shami over the cordon to reach his half-century with an eighth boundary.

By lunch England were 24 in front and Root was soon topping that up after the restart, flicking Bumrah down to the fine-leg ropes then posting another fine blow through cover-point.

Sibley does not have the same range and when he finally tip-toed out of his comfort zone, playing away from his body at Bumrah, some lavish seam movement drew the inside-edge. The renewed intent was not necessarily misplaced but the execution was not enough tight enough.

Root survived similar balls as Bumrah suddenly found consistent help from the pitch but the middle-order strokemakers flickered all-too briefly. Bairstow punched his way to 30 but took Siraj’s short ball on and fed a powerful flat pull straight to the waiting fielder at deep square.

Lawrence followed with a positive 25, including a snazzy one-footed flick away to midwicket, but ended up lbw to Shardul Thakur when he got his bat lost behind the front bad in defence.

Root did not rush to three figures, happy to play the ball on his merits, with Jos Buttler reaching 15no by the interval.