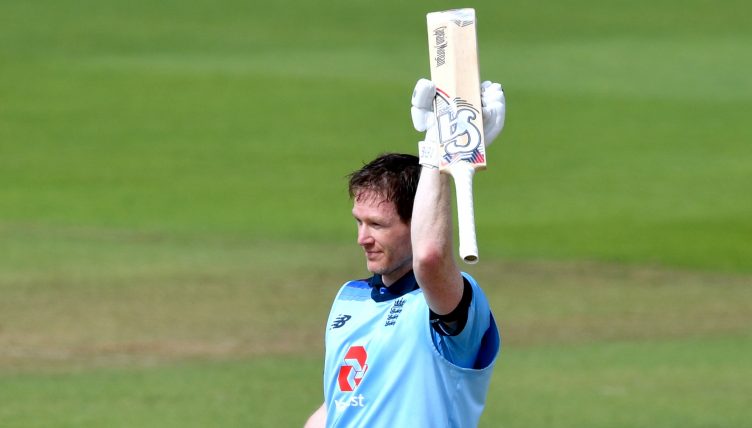 Eoin Morgan’s 78-ball hundred and quickfire half-centuries from Tom Banton and David Willey carried England to 328 all out in the final match of the Royal London series against Ireland.

England had lurched to 44 for three but Morgan clubbed 106 from 84 balls, which included 15 fours and four sixes, putting on 146 in 18.2 overs alongside Banton at the Ageas Bowl in this third one-day international.

Banton’s 58 from 51 balls was his maiden international half-century but both he and Morgan were among a cluster of wickets to fall as England slipped from 190 for three to 216 for seven, with David Willey’s 51 from 42 deliveries largely responsible for the hosts going past 300 after Ireland won the toss and decided to field first.

England’s total is one more than Ireland required when they memorably beat the same opponents at the 2011 World Cup.

For the second innings in a row, Jason Roy fell in the first over as a loose drive to one that moved fractionally away from him off Craig Young was pouched at second slip, while Jonny Bairstow missed a heave off the returning Mark Adair and was bowled by a delivery that shaped back in.

James Vince produced one stylish cover drive but then inside-edged Young through to the wicketkeeper – the not out decision overturned on review – to depart for 16.

Morgan entered at his usual position of four for the first time in the series and set about steadying the ship, driving down the ground when Young over-pitched and pulling authoritatively when any of the seamers dropped short.

He required a new helmet after failing to get out of the way of Young’s bumper, but it was to be his only misstep under the short ball, dismissively pulling Josh Little’s bouncer for the first of his four sixes.

Morgan was dropped on 67 by a diving Andrew Balbirnie at midwicket before Banton started to emerge from his more senior partner’s shadow with some lusty blows of his own, the most eye-catching of which was a crunching six off spinner Andy McBrine en route to a 41-ball fifty.

Little was drilled down the ground as Morgan moved to three figures but the left-armer would remove the dangerman, whose leading edge skewed to backward point. Banton was then lbw to the part-time leg-spin of Gareth Delany while the out-of-sorts Moeen Ali got a leading edge off Curtis Campher to short extra-cover.

Sam Billings had been the batsman to see England over the line in the previous two matches with unbeaten knocks of 67 and 46, but he fell for 19 after driving Young to mid-on as England lurched from 190 for three to 216 for seven.

Willey, another star performer for England during the series, ensured the wheels did not fall off and was the aggressor in a profitable 73-run stand for the eighth wicket alongside Tom Curran.

Adair was taken the distance after dropping short as was McBrine, who was twice muscled over the midwicket boundary for six as Willey brought up a 38-ball fifty before being caught in the deep off Campher.

Tom Curran (38no) and Saqib Mahmood (12) put on a handy 30 before the latter skewed to mid-off off Little from the penultimate ball of the innings, leaving Ireland needing 329 to claim a consolation win, already trailing 2-0 in the series.