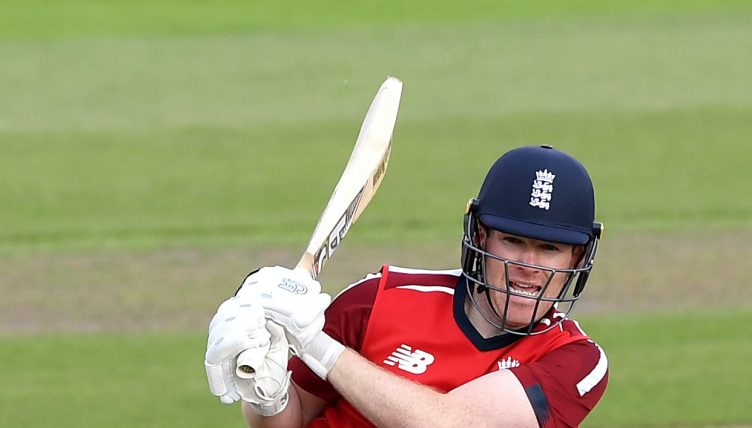 Eoin Morgan took centre stage as live cricket returned to terrestrial television, the England captain clubbing 66 off 33 balls to help his side to a five-wicket win over Pakistan in the second T20 international.

In pursuit of 196, Jonny Bairstow and Tom Banton laid the foundations with a 66-run partnership and, although they departed in the space of two balls, Morgan flayed six fours and four sixes to keep the momentum going.

He was dismissed with 18 required in the last three overs but Dawid Malan, the junior partner in a 112-run union with Morgan, went to another fifty to help England over the line with five balls to spare at Emirates Old Trafford.

Malan’s unbeaten 54 in 36 balls – his seventh 50-plus score in 12 T20 innings – helped England move into a 1-0 lead on a day when the BBC screened live coverage of a cricket match for the first time in 21 years.

Pakistan’s 195 for four, bolstered by 56 from 44 balls from captain Babar Azam and a more belligerent 69 from 36 deliveries by Mohammad Hafeez, was in vain and they now must win on Tuesday to avoid a series defeat.

On the same pitch that was used for Friday’s abandoned game, Babar set the tone after England won the toss, dispatching a Saqib Mahmood bouncer for four through mid-wicket and, though Morgan juggled his bowlers early on, the world’s top-ranked T20 batsman and Fakhar Zaman were untroubled.

Moeen Ali bowled the second over and was milked for 10 but curiously did not feature again and, after Pakistan raced to 51 without loss in the powerplay, Fakhar cut loose off Adil Rashid, who had his revenge two balls after being thrashed for six when the batsman attempted to repeat the trick only to hole out to long-on.

Fakhar’s downfall for 36 off 22 balls in a 72-run opening stand failed to stem the flow of runs, Babar moving to a 37-ball fifty with back-to-back fours either side of the wicket off Rashid, while Hafeez went past 2,000 T20 international runs by hitting Mahmood over deep square-leg for six.

Babar tamely clubbed Rashid to deep mid-wicket as England looked to wrestle some of the initiative back, but Hafeez accelerated dramatically with two leg-side maximums in a Tom Curran over that yielded 23 runs.

Shoaib Malik drilled Chris Jordan’s attempted yorker to Morgan at cover for 14 but Hafeez moved to a 26-ball fifty with a fine scoop for four after Mahmood had over-pitched. Morgan dropped a difficult chance to reprieve Hafeez on 65 but the England captain held on in a final over where Curran conceded seven to keep Pakistan under 200.

However, England’s openers departed off successive Shadab Khan deliveries, Bairstow the first to go for 44 off 24 balls as he top-edged a sweep high to square-leg while Banton was lbw for 20 after playing all around the leg-spinner’s googly.

Morgan survived a tight leg-before shout in the same over but he settled to his task by heaving Shadab for a towering six over deep square-leg while off-spinner Iftikhar Ahmed and Haris Rauf were also taken the distance, Pakistan’s options encumbered by Amir limping off the field with an apparent hamstring complaint.

Malan had been happy to defer to his captain but the Yorkshrie batsman hammered Shadab for six over deep mid-wicket before Morgan reached a 27-ball fifty by creaming Shaheen over the same area while three successive fours later in the over left England needing just 34 in the final five overs.

Morgan holed out off Rauf and there were some minor jitters as Moeen continued his lean trot by picking out short mid-wicket off Shadab Khan. But Malan was a reassuring presence at the crease and he become the fourth half-centurion of the day in the penultimate over.

After Sam Billings’ useful cameo of 10 from five balls, Malan concluded matters with an assured drive for four through the covers off Shaheen.