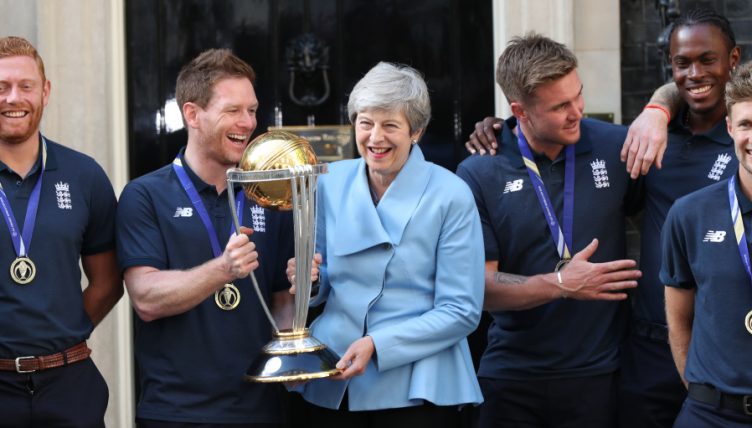 World Cup-winning captain Eoin Morgan has revealed how the team’s visit to Downing Street went, whilst also confessing he is yet to make a decision on his playing future.

Less than 24 hours following the stunning conclusion to the 2019 Cricket World Cup final, Eoin Morgan’s men were invited to meet British Prime Minister Theresa May for a reception at No. 10.

Keen to avoid the infamous shenanigans of 2005 when the successful Ashes team ran amuck in the Prime Minister’s residence, Morgan conducted himself with dignity and ensured his troops followed suit.

Now speaking to the Telegraph following his selection to the Euro T20 Slam’s Dublin Chiefs, Morgan has revealed how the prestigious meeting went down.

“It was brilliant,” Morgan said.

“When you are briefed they tell you that when you walk down Downing Street you just have to wait outside the door and she will come out and greet you.

“We got within about 10 yards and she came out. We thought ‘wow she is keen to meet us.’

“She loves cricket. Her and husband go all the time and are self-confessed Test match fans but she watched all the World Cup (final) and loved it.

“One of the cooler parts was we walked down through the corridors at No 10 and all the staff were there cheering us. It was amazing.”

Sentiment breeds stagnation in sports, however, and the question of if Morgan should continue as ODI captain has already been posed in the media.

Ex-England director of cricket Andrew Strauss recently spoke about a lack of desire and determination that could arise for the Irish-born skipper now that England’s ultimate 50-over goal has been achieved.

The decision, in the end, will be Morgan’s to make though, and the man himself is in no rush to make it just yet.

“I have tried to think about it the last couple of days but everything has felt emotional,” Morgan told the Telegraph.

“If I was under pressure to make a decision, I would probably make the wrong decision.

“I don’t know what the right decision is yet but if I made it now, I think I would look back and think I made it while I was all over the place.

“Thankfully I am not under a lot of time pressure. I am going to go away to get away from everything. Hopefully that will put into picture what has happened and my future.

“Family is at the forefront of it but also the team but I have also battled through the World Cup with my back and my fingers and mentally it has taken a huge amount out of me and it has got to be the right decision.

“I also have to ask; can I add value to the team? Right now, I think I can, but will I have that drive this time next year? Will I have it in four years’ time?

“I don’t want to leave it too long. It is not fair on anybody. I would like to say before the end of the season.

“The schedule is to leave on Oct 20 and the squad will have to be picked two or three weeks in advance. Hopefully I will have come to the decision before then.”