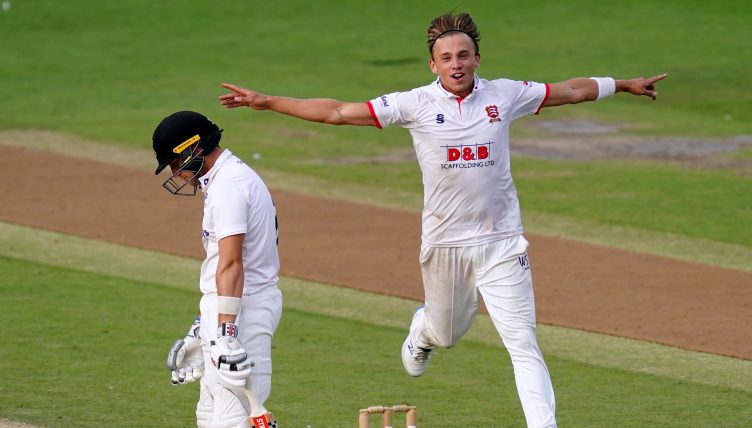 Essex confirmed their place in the Bob Willis Trophy final with an emphatic nine-wicket win over Middlesex to finish unbeaten at the top of the South Group.

Middlesex had resumed on 123 for six at Chelmsford, but two wickets from paceman Sam Cook helped swiftly bowl the visitors out for 150, as Aaron Beard returned impressive second-innings figures of four for 21.

Essex book their place in the Bob Willis Trophy final

Sir Alastair Cook, who made 21, Paul Walter, unbeaten on 20, and Tom Westley, 10 not out, then chalked off the 53 runs required inside 14 overs.

Essex ended with 90 points after four wins from their five matches, with Central Group rivals Somerset and Worcestershire seemingly left battling it out to join them in the five-day showpiece final match at Lord’s, which starts on September 23.

A century from 20-year-old opener Tom Lammonby helped put Somerset in charge as Worcestershire were set a 245 target in their top-of-the-table match at New Road.

Lammonby finished unbeaten on 107, with 12 boundaries and three sixes, as Somerset were all out for 193. All-rounder Ed Barnard collected four for 25.

Bell signs off with classy knock

The 38-year-old five-time Ashes winner, set to retire at the end of the 2020 domestic season, helped Warwickshire reach 347 for seven declared.

Dan Mousley, 19, struck his maiden Championship half-century before being caught for 71 late on and Glamorgan then reached nine without loss.

North Group leaders Derbyshire saw their hopes of reaching the final all but disappear against Lancashire at Aigburth.

The visitors fell just short of a batting point as they were all out for 195, with a determined eighth-wicket stand of 102 between Harvey Hosein (84) and Mattie McKiernen (31). Danny Lamb took four wickets.

Lancashire openers Keaton Jennings (81) and Alex Davies (86) helped set the hosts on to 312 for six by stumps, a lead of 336. Matthew Critchley collected four wickets.

Yorkshire’s hopes of progress, meanwhile, were scuppered despite closing in on victory over Leicestershire at Headingley.

The hosts were bowled out for 252 as they looked to reach 400 in their first-innings reply to Leicester’s 124 – a score which would have given them hope of also reaching the 90-point tally.

Yorkshire had slipped to 46 for four before a sixth-wicket partnership of 116 between Jonny Tattersall (71) and Jordan Thompson (62) helped steady the innings.

By stumps, Leicestershire were 78 for five, still 50 runs behind, after Jordan Thompson took three wickets for 13 before bad light stopped play.

In the South Group, England Test batsman Zak Crawley responded to his first-innings duck by hitting a century as Kent beat Hampshire by seven wickets at Canterbury.

Marcus O’Riordan finished unbeaten on 52 as Kent chased down a victory target of 181 which secured second place in the standings.

Tom Scriven had earlier made a determined 68 as Hampshire, resuming on 108 for five, were dismissed for 159. Harry Podmore completed a five-wicket haul.

Surrey spinner Dan Moriarity took his match tally to 11 wickets with a career-best six for 60 as Sussex were reduced to 109 for nine at the Oval.

Amar Virdi also picked up three wickets, with Stuart Meaker’s unbeaten 32 edging the visitors on from 62 for eight.

Jack Carson completed a maiden five-wicket haul, while Will Jacks was 84 not out as winless Surrey were dismissed for 388.

Durham edged in front of Nottinghamshire at Trent Bridge.

Ben Duckett (150) and Joe Clarke (133) had both made centuries as the hosts were bowled out for 422 – losing their last five wickets for only 15 runs.

Chris Rushworth returned figures of seven for 108. In reply, Durham were 131 for two at stumps, a lead of three. Michael Jones was 39 not out after Sean Dickson had made 56.