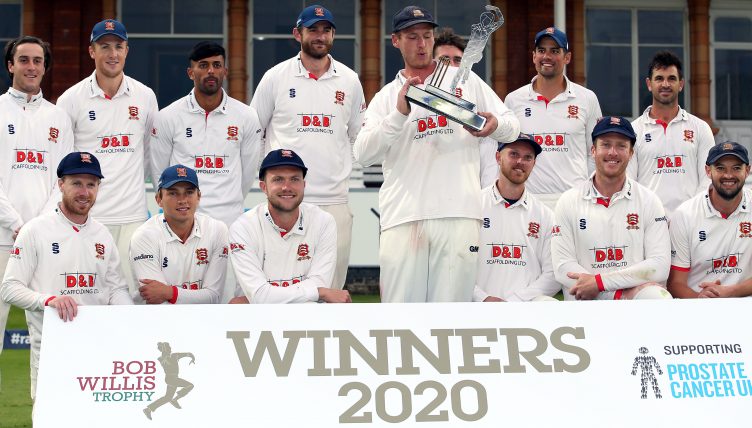 Essex will begin the defence of their County Championship and Bob Willis Trophy titles next year against Worcestershire at Chelmsford on April 8, when all first-class teams will be in action in a restructured campaign.

Uncertainty remains at what restrictions will be in place amid the coronavirus pandemic, so in 2021 the counties have been initially split into three seeded conferences of six, playing each side within their group home and away.

The opening nine rounds are scheduled to take place on consecutive weeks, with Thursday starts and Sunday finishes, and is set to conclude in July before groups are sorted into three performance-related divisions.

After another four matches, with the opening round scheduled to begin on August 30 – a Bank Holiday Monday – the table-toppers of Division One will be crowned county champions.

They will then play the runners-up in a showpiece Lord’s final for the Bob Willis Trophy, starting on September 27. If that fixture lasts all five days then the first-class season is scheduled to finish on October 1.

“We’re all looking forward to the return of the County Championship in 2021 after a very challenging year in 2020,” said Neil Snowball, the England and Wales Cricket Board’s managing director for county cricket.

“We have seen an innovative and collaborative approach between the ECB and the 18 first-class counties that has enabled us to plan for 2021 with a new, County Championship structure for 2021 only, that is designed to be both exciting for players and supporters and also flexible to the possible ongoing impact of COVID-19.

“We are also working hard with all 18 first-class counties to ensure that we are able to welcome the return of crowds safely next year and will continue to work closely with Government and all relevant authorities.”

The established two-division championship, which was won by Essex in 2019, was last year replaced by the Bob Willis Trophy after the domestic season was put on hold for four months because of the COVID-19 crisis.

Comprising of three regional divisions and a five-day final at Lord’s, Essex again came out on top following a draw with Somerset, whose wait for a first-class title continues.

Somerset face an immediate return to the home of cricket to take on Middlesex in their opening fixture.

The men’s and women’s fixtures for the domestic white-ball competitions are set to be announced early next year.