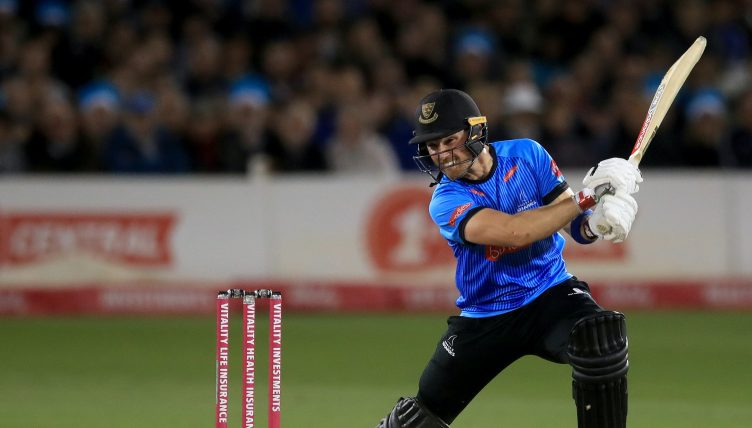 Defending champions Essex remain winless in the Vitality Blast South Group after losing to Surrey by four wickets in a thrilling finale in Chelmsford.

Batting first, the hosts made 195 for eight, with Cameron Delport and Adam Wheater both scoring half-centuries.

Laurie Evans then hit an unbeaten 88 in Surrey’s reply, before Gus Atkinson’s boundary off the final delivery sealed the win.

While Surrey are second in the group, Essex are bottom after four matches and looking set to miss out on the play-offs.

In the Central Group, Gloucestershire replaced Northamptonshire in top spot after beating them by 35 runs at Wantage Road.

A 50 from Chris Dent helped Gloucestershire to 185 for six and Graeme Van Buuren subsequently took three for 15 as Northamptonshire struggled to 150 for six.

Lying third are Birmingham, who made it back-to-back wins with a 13-run victory over Glamorgan at Edgbaston.

After the Bears were restricted to 142 for nine, with captain Will Rhodes contributing 46, Glamorgan could muster only 129 for eight. Jake Lintott delivered a superb spell of three for 11 from his four overs.

Worcestershire earned their first success of the tournament with a three-run victory over Somerset at Taunton.

The visitors posted 168 for four after winning the toss, Ben Cox top-scoring with 56 not out, and Somerset’s reply ended up as 165 for eight, Tom Abell making 60 while Pat Brown claimed three for 39.

The Outlaws won by six wickets having been set a victory target of 168 by their opponents, whose earlier 167 for five featured 37 from Steven Croft.

Leicestershire moved ahead of Yorkshire into third place after a last-ball victory over them at Grace Road.

Gareth Delany and Colin Ackermann notched half-centuries as the home side pursued 189, which they looked set to fall short of before Ben Mike launched the final ball for six over the head of bowler Adam Lyth to win the contest. Lyth had earlier scored 71 in his side’s 188 for six.

Also in the North Group, Ben Raine smashed eight sixes to power Durham to their first win of the campaign, defeating Derbyshire by 55 runs at Emirates Riverside.

Raine scored 71 from only 39 balls, and was supported by an unbeaten 77 from Alex Lees to post the home side’s second-highest 20-over score of 223 for two – only two runs shy of their all-time record.

Leus Du Plooy top-scored for the visitors with 53 as Derbyshire made 168 for five in reply.