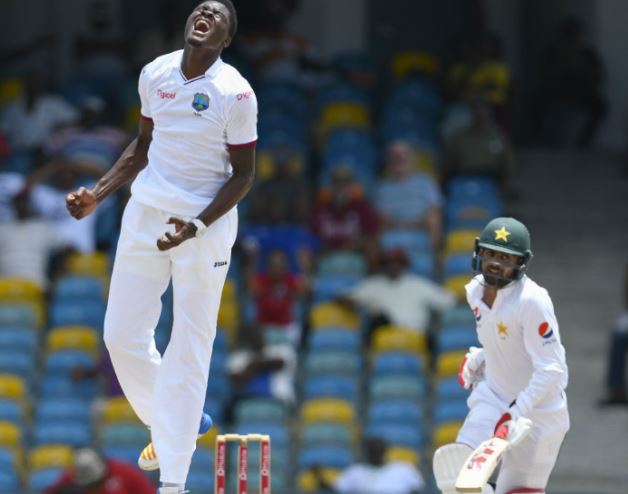 The West Indies recorded a historic 106-run victory over Pakistan on day five of the second Test at the Kensington Oval in Barbados on Thursday.

Resuming on 264 for nine overnight, the hosts eventually slipped to 268 all out in their second innings, with visiting leg-spinner Yasir Shah completing telling figures of seven for 94.

Chasing a modest 188-run target, the Pakistanis capitulated to an embarassing 81 all out in 34.4 overs. Fast bowler Shannon Gabriel proved the destroyer in-chief, gathering a match-winning haul of five for 11. He was well supported by fellow seamers Alzarri Joseph and Jason Holder, who shared the remaining five wickets.

Gabriel bowled with great fire, exploiting the swing and seam movement on offer across a challenging Bridgetown pitch superbly.

Pakistan’s final total – and overall defeat – would have been substantially worse, had the collective rearguard action of wicketkeeper-batsman Sarfraz Ahmed and tail-ender Mohammad Amir not fashioned 42 for the eighth wicket.

Batsmen three through six, in fact, managed a mere five runs between them.

The 29-year-old Gabriel’s overall haul of nine for 92 secured the Man of the Match accolade.

“I think it was a complete team effort. I think I was trying too hard and trying to bowl too fast, so I just made the decision to stay calm in the second innings,” he said.

The result saw the three-match affair squared one-all, with the series decider set to get underway in Roseau on Wednesday.