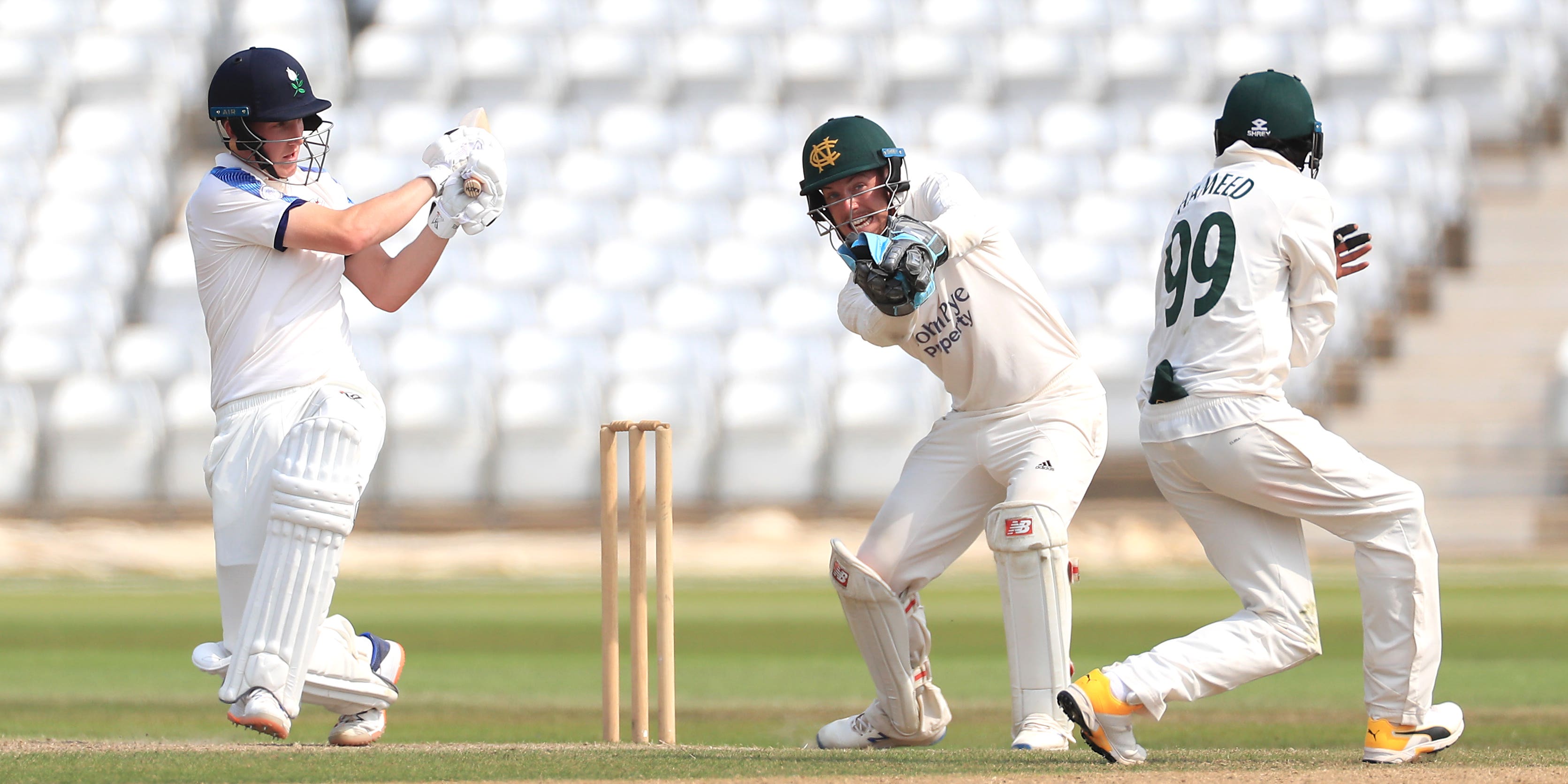 Harry Brook and Matthew Fisher starred as Yorkshire hammered Somerset by an innings and 33 runs inside two days in their LV= Insurance County Championship Division One fixture at Scarborough.

Brook hit 118 before Fisher claimed a career-best nine wickets in the match.

Fisher’s four for 23 helped Yorkshire skittle Somerset for 141 all out, sealing victory with one ball to spare in the day after the extra half-hour was taken.

Mark Stoneman and Sam Robson set a new record Middlesex first-wicket partnership of 376 in a commanding batting display against Sussex at Hove.

Stoneman hit 174 for his first Middlesex century, while Robson was unbeaten on 192 as the visitors reached 400 for two at stumps on day one.

Stoneman and Robson’s mammoth partnership topped the 372 of Mike Gatting and Justin Langer against Essex at Southgate in 1998.

Ben Hutton claimed five for 62 as Nottinghamshire took control with a 231-run lead over Lancashire.

Hutton’s five-wicket haul forced Lancashire to capitulate from 28 for two overnight to 168 all out in their first innings.

Tom Bailey and George Balderson claimed two wickets apiece to claw back some ground at least for Lancashire, who restricted Nottinghamshire to 127 for five at stumps.

Essex are closing in on victory having reduced Gloucestershire to 132 for five in their second innings at Chelmsford.

Gloucestershire trail Essex by 68 runs, with James Bracey’s 50 and Ben Charlesworth’s 49 rare highlights with the bat.

Simon Harmer took two for 38 for the home side, with Shane Snater and Sam Cook both in on the act with a wicket apiece.

Paul Walter had earlier posted a career-best 96 for Essex after the hosts’ 150 for five after day one wound up as 276 all out.

Jack Leaning’s 97 and 72 from Sam Billings pushed Kent to the brink of victory over Worcestershire.

Leaning and Billings turned an overnight 184 for four into 393 all out, before Worcestershire slumped to 91 for six in their second innings.

Clarke claimed three for 34 as Surrey bowled out their hosts for 171 at Wantage Road.

Luke Procter claimed two wickets to strike back for Northants, but Hashim Amla’s unbeaten 26 left Surrey 102 for four at the close and with an overall lead of 183.

Durham are mere formalities away from defeating Glamorgan, with the visitors to Emirates Riverside requiring 335 further runs to avoid an innings defeat.

Ben Raine, Liam Trevaskis and Ned Eckersley all hit half-centuries, with Sean Dickson and David Bedingham weighing in with positive contributions to boot in an eventual 503 for eight declared.

Glamorgan then lost David Lloyd and Nick Selman to reach 71 for two in their second innings.

Chris Wright snared his 500th first-class wicket to cap a fine individual day that started with a career-best 87 as Leicestershire took control against Derbyshire.

Lewis Hill hit 113 and Harry Swindells made 76 in Leicestershire’s 528 all out.

Ben Aitchison, Matt Critchley and Alex Thomson all grabbed three wickets but Derbyshire were left in trouble with a reply reaching 41 for three.

Hampshire put the squeeze on Warwickshire by taking a 233-run lead at Edgbaston.

The visitors turned their overnight second-innings 41 without loss into 260 for eight, with Keith Barker’s unbeaten 49 proving pivotal.

Ian Holland’s 44 and 48 from James Vince helped put Hampshire into a positive position, with Liam Norwell taking four wickets for the Bears.