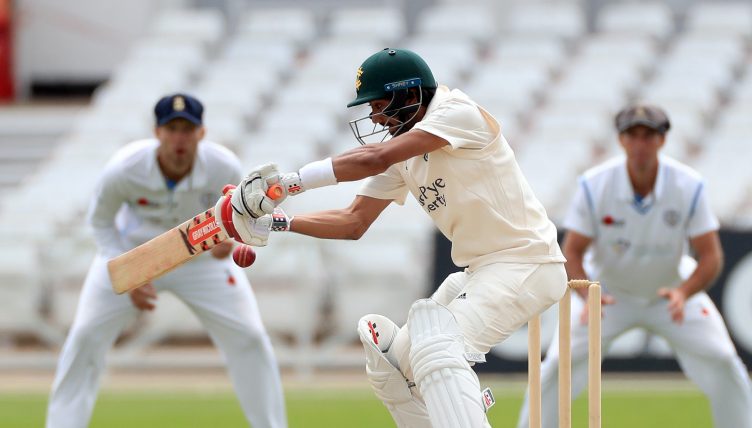 Nottinghamshire opener Haseeb Hameed has expressed his desire to return to the international stage and revealed Virat Kohli has been a big inspiration in turning around his career.

The top-order batsman signed a new deal on Thursday to keep him at Trent Bridge until the end of the 2022 season.

Bolton-born Hameed left Emirates Old Trafford only three years after he starred for England on their tour of India before his career nosedived with a particular low point 2018 where his average failed to reach double figures.

A new lease of life at Nottinghamshire has enabled the opener to put that behind him and again look to the future with excitement.

“Having got a taste of it very young and then those experiences that followed, it has been an absolute rollercoaster but that ambition is still there,” Hameed said of an England recall.

When as a 19-year-old Hameed made his Test debut against India in Rajkot and flourished with 82 in the second innings, plaudits quickly followed with the nickname of “Baby Boycott” coined.

A gutsy 59 not out with a broken finger in Mohali saw even rival captain Kohli label the youngster as a “future star” but 2017 brought a lean spell.

From being pencilled in as England’s opener for the foreseeable future, Hameed ended up in Lancashire’s second XI.

It was during this period where past comments like Kohli’s were used to ensure a different career path was never chosen.

“Obviously for someone like Virat to say that does give you a lot of confidence and he is a massive inspiration for me as it is,” Hameed added.

“He is someone I look up to and what inspires me is he is very open about the downfalls that he has had in his career. He speaks a lot and very openly about his pre-fitness days and how his diet wasn’t as good as it should be, having late nights and being quite normal about it.

“I think he is a great inspiration for people to look at and see what you can achieve if you put your mind to it and have a bit of discipline. Yes 100 per cent he has been a massive inspiration and something that has helped.”

Hameed continued: “I have something deep down that won’t let me stop.

“I didn’t think about walking away from the game, but of course you have doubts and that is when you need something within you, deep down to stop you from giving in and to try one more time and to keep doing that. The mental resilience has been quite important to me.”

Peter Moores’ influence on the 23-year-old has been crucial, with Hameed “always learning” under the Nottinghamshire head coach.

The duo have also worked on England’s youngest ever opener developing a white-ball game to marry his love of batting for long periods.

“I have got to a stage now where I understand my game a lot more,” Hameed insisted.

“It is less a case of looking for answers elsewhere, actually knowing I have them within me and developing them in a way where I can show it consistently, so I am excited for what the future holds.”

Hameed was honest about his sharp decline at Lancashire and conceded a change was best for both parties, but is confident positive times are ahead, especially given the trend of his cricketing life so far.

Achievements have often followed hardship, with his struggles aged 14 followed by a stand out year before he missed out on the Under-19 World Cup at the start of 2016 only to be in the senior Test side nine months later.

While Hameed has not had any recent talks with England’s management, Ashley Giles, his former head coach at Lancashire, is someone he knows he can always turn to for advice.

For now, the immediate goal for the Nottinghamshire batsman is to score runs which will help his county rediscover a winning feeling in red-ball cricket – something they have not achieved since June 2018.

“It is just about me performing to my best and having that confidence if I am able to do it for a period of time, I am good enough to get into that England set-up again,” Hameed concluded.