Home News Hazlewood wants DRS reviews slashed down to one

Hazlewood wants DRS reviews slashed down to one 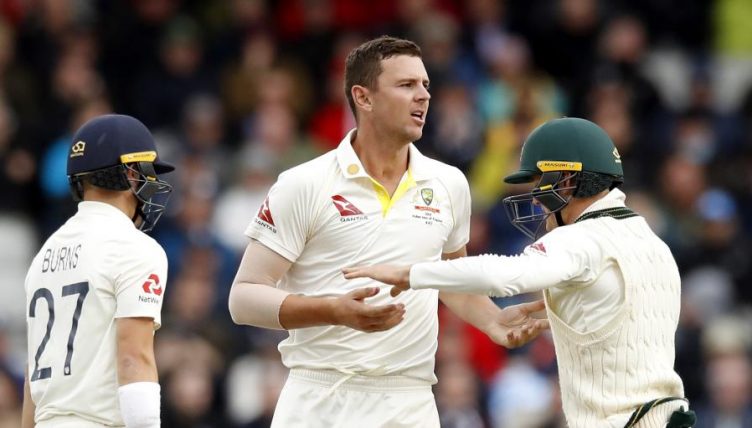 Australia fast bowler Josh Hazlewood believes that the Decision Review System (DRS) would have an improved impact on Test cricket if teams were only allotted one review.

The DRS system has gone a long way towards eliminating so-called ‘howlers’ from the game but has simultaneously introduced various shades of grey to dismissals.

With two reviews in hand captains or batsmen will sometimes opt to use a review speculatively rather than out of certainty.

Hazlewood feels that cutting reviews back to one per innings in Test cricket would improve the use of DRS.

“I’d review them all day if I could but to have a better impact on the game, I think one might work better,” Hazlewood said on The Unplayable Podcast’s Ashes Revisited series.

“If you just had one each per innings then people would use it totally differently.

“I think umpires can fall into the trap of umpiring a little bit differently depending on who’s got reviews left and how many they’ve got.

“They’ve got to umpire based on nothing there as well, but if you just had one each you’d save it, you wouldn’t use it early unless you were positive and that’s what it’s there for, that howler.”

Australia’s Ashes tour in 2019 was heavily impacted by DRS reviews, leading to the team coming together to establish a set of protocols for their use.

Hazlewood concedes that it is very difficult for players to judge decisions accurately in the heat of battle, making consultation key.

“After that game we sat down and said, ‘Let’s put a process in place’. At least we had something to fall back on if we don’t know,” Hazlewood explains.

“That was the bowler and the wicketkeeper and someone from side on comes in and we have a quick discussion why wasn’t it given out.

“That’s why the square fielder comes in to say, ‘The height looked good from my angle’. The keeper (Paine) has a say, and he’s obviously the captain as well, so that helps, and we make a quick call then and at least we have a process now we go through.

“It’s not there for the 50-50 calls but when you’re in the heat of the battle, you just want to get that wicket and you think it’s out at the time.

“People sitting at home in their loungerooms see it on slo-mo and all the angles and we have to make a decision 15 seconds after it happens and we see it at 140kph.”

England will travel to Australia for the 2021/22 Ashes, with the five Test series likely to get underway in November 2021.