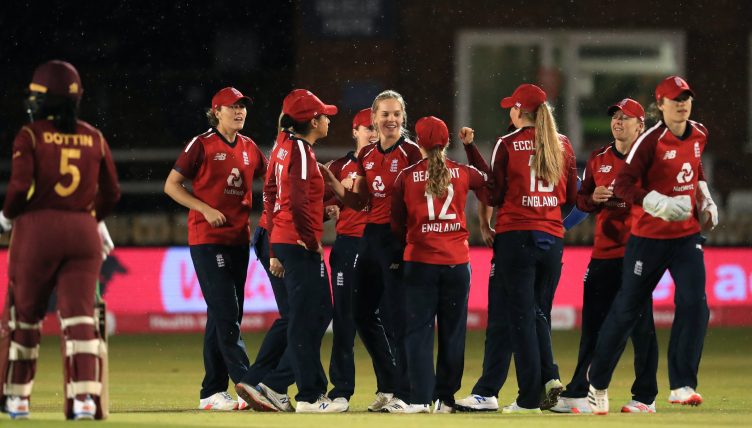 Heather Knight toasted “a bizarre end to a bizarre summer” after England Women sealed a 5-0 series win over the West Indies in a chaotic five-over clash.

Just a couple of months ago Knight’s side were staring at the prospect of a blank domestic calendar, rescued by the England and Wales Cricket Board’s perseverance and the tourists’ willingness to step up at short notice.

The Windies earned plenty of plaudits after filling a vacancy left by no-shows from India and South Africa but were unable to land a blow across the five Twenty20s, narrowly missing out in the final encounter at Derby’s Incora County Ground which was abbreviated to its quickest form by rain.

England’s pursuit of a modest target of 42 went off the rails a few times as they lost seven wickets – including successive run-outs in the final over – but they came out on top after Shakera Selman sent down successive no-balls to settle things.

“It was a bit scrappy but that’s the nature of a five-over game. It was a bizarre end to a bizarre summer wasn’t it?,” said Knight.

“It was about winning today and we are delighted to do that, win 5-0 and end on a high.”

Knight will now join five of her team-mates – Tammy Beaumont, Katherine Brunt, Amy Jones, Nat Sciver and Sarah Glenn – in heading Down Under to take part in the Women’s Big Bash League.

Head coach Lisa Keightley, meanwhile, was pleased to see her side subjected to an intense finish after easing to relatively sedate victories in the first four matches. On each occasion they batted first and defended by healthy margins, but this was a much more frenetic experience and one which may be more beneficial in the long run.

“This was a fantastic opportunity to see how the players went under a bit more of that pressure.”

Sarah Glenn, the leg-spinner and burgeoning all-rounder, walked away with the player-of-the-series award and earned a nod of appreciation from Keightley, who was concluding her first series in charge on English soil.

“Sarah has been fantastic over the last 12 months,” she said. “She has really changed the game for us in the Twenty20 format.

“We haven’t seen the best of Sarah Glenn. Batting-wise she is one of our cleanest strikers, so the more time we can get her in the middle moving forward, the better.”