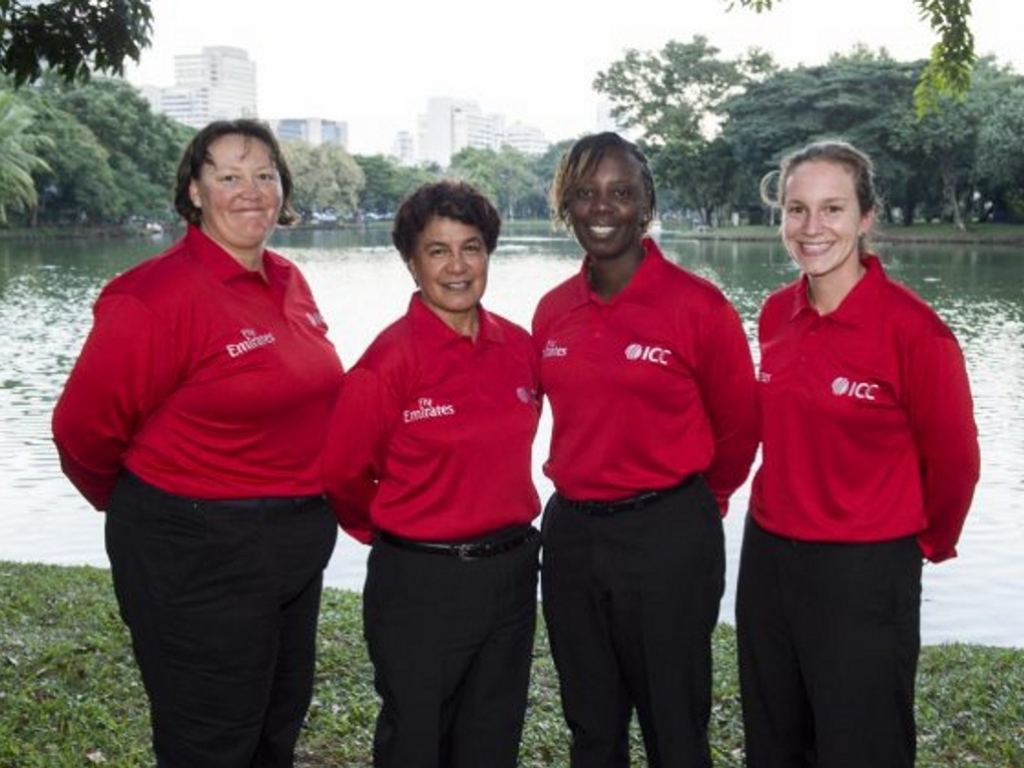 The International Cricket Council has named four women in a strong field of nine umpires to officiate in next month’s ICC Women’s World Cup Qualifier 2017 in its continued efforts and commitment to the overall growth and development of women’s cricket.

The 7-21 February event in Colombo, Sri Lanka, will see the experienced Kathleen Cross of New Zealand lead the group of women umpires who all have international experience and are being groomed for more future responsibilities by the ICC.

Cross, who was the first woman to be named in an ICC umpires’ panel in 2014 when she was named in the Associates and Affiliates panel, is the most experienced of the four officials with Sue Redfern of England, Claire Polosak of Australia and Jacqueline Williams of the West Indies the other women figuring in the list of umpires.

The five men umpires in the 14-day tournament include Anil Chaudhary, Leslie Reifer, Raveendra Wimalasari (all from the Emirates International Panel of ICC Umpires), Ian Ramage and Mark Hawthorne (both from the ICC Associate and Affiliate International Umpires). Graeme Labrooy will be the match referee, while Peter Manuel will be the umpires coach.

With the ICC Women’s World Cup 2017 to be staged in England and Wales from 24 June to 23 July, the Colombo event will provide an opportunity for the women umpires to push their casefor inclusion in the pinnacle women’s event.

Adrian Griffith, ICC’s Senior Manager – Umpires and Referees: “The ICC is committed to the growth of women’s cricket and more female officials in the game is a natural progression. We have four extremely capable female umpires for the ICC Women’s World Cup Qualifier 2017 and are hopeful that more women will be able to officiate in international matches in the coming years. I’m sure watching these four officiate in this tournament will inspire more women to take up umpiring.”

Kathleen Cross: “The importance of this event is that I continue to maintain, learn and deliver skills so that I present the best possible performance on each match day. Being able to live up to these expectations are a continuing challenge in itself. Therefore, preparation and continuing improvement is so important.

“Opportunities through ICC events always brings a great deal of excitement and allows me to continue to be a good role model, more importantly, because now there are other women being appointed to events. It is always my aim to maintain high standards of professionalism, attitude, and leadership, in all aspects of the game.

“This tournament will surely be another showcase of how women’s cricket has grown and become a very contestable arena. The physical, emotional and mental toughness will produce the highest of standards. The four places that are being contested will definitely bring out the best in all the competing countries. I look forward to being a part of this event and working with my colleagues from different corners of the globe.”

Claire Polosak: “To have the opportunity of working with umpires from around the world is fantastic, and one that not many get to experience. I am looking to learn from each and every one of them, and going home to Australia a better umpire. In fact, my goal for the tournament is to learn, return to Australia and share my new found knowledge.

“I think that with the increased exposure of women’s cricket around the world, there is naturally an increase in the exposure for female umpires.The ICC is forward thinking in its appointments of female umpires to such important tournaments.

Sue Redfern: “I’m really excited and feel very privileged to have this opportunity, which will help me to continue to develop as an umpire and build on previous ICC appointments.

“I hope my selection to the tournament shows other women in England and across the world that there are more opportunities in cricket than just playing and they should have the courage to follow their dreams. I’m hugely grateful to both ICC and ECB for their continued support in helping me realise mine.

“Travelling to Sri Lanka will be a fabulous experience both on and off the field – it’s a fantastic chance to stand with colleagues, both male and female from around the globe, to learn different techniques and to gather knowledge.”

Jacqueline Williams: “I’m delighted to be named among the umpires for this tournament. It’s a major tournament in women’s cricket with some of the best players in the world. All the appointments I have been on are stepping stones and I have welcomed all with open arms. I always find something to work on and improve. There is a lot to learn as an umpire.

“Going to Sri Lanka, I have been doing my homework, looking at the conditions, the weather and other aspects of the game so I know what to expect before I reach there. It’s somewhere different but I’m happy to be involved and hoping to give my very best.”