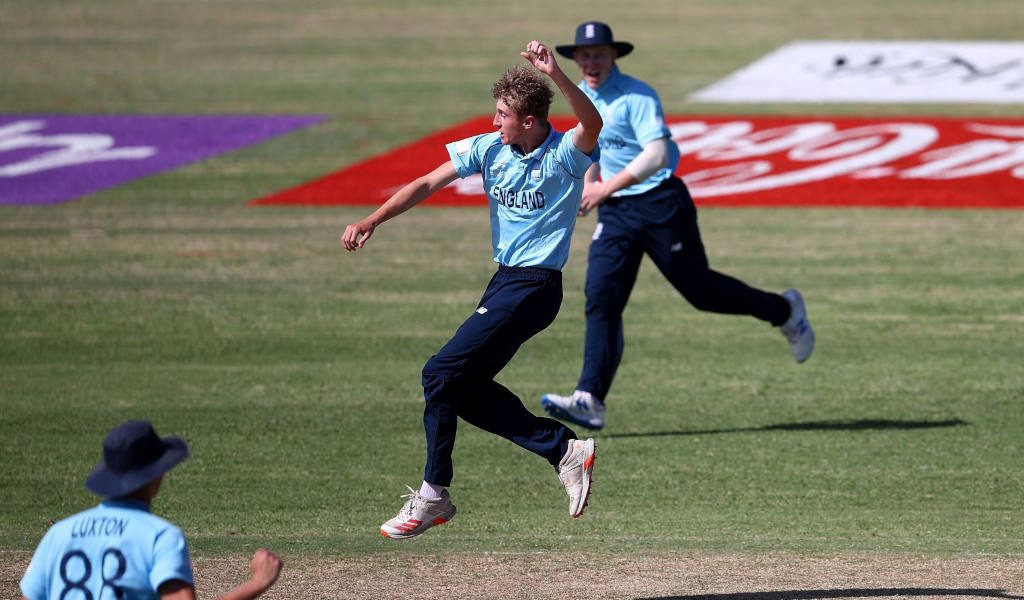 Bangladesh’s defence of their ICC Under 19 Men’s Cricket World Cup title got off to a poor start as they slipped to a seven-wicket defeat against England in their Group A opener.

England’s bowling attack decimated the Bangladesh batting line-up as the reigning champions were reduced to 51 for nine in the 25th over at Warner Park in St Kitts and Nevis.

No.11 Ripon Mondol hit 33 not out in a spirited last-wicket stand of 46 with Naimur Rohman (11) to drag Bangladesh up to 97, but they were still dismissed with the best part of 15 overs going to waste.

In reply, the Young Lions lost opener George Thomas and captain Tom Prest but Jacob Bethell and James Rew put on 65 before the former was run out just shy of the finish line as England cruised to victory.

Bangladesh captain Rakibul Hasan was part of the side that lifted the trophy in South Africa in 2020 and elected to bat after winning the toss.

Seamer Joshua Boyden had openers Mahfijul Islam (3) and Ariful Islam (4) caught behind by wicket-keeper Alex Horton and Bangladesh were reeling at seven for three in the eighth over when James Sales got in on the act as No.3 Prantik Nawrose Nabil departed without scoring to give Horton his third victim.

William Luxton ran out Md Fahim to make it eight for four before first-change bowler Thomas Aspinwall got his reward for running in and hitting the deck hard when he had Ashiqur Zaman caught by Luxton for nine.

Left-arm spinner Fateh Singh picked up his first scalp of the tournament when Aich Mollah was caught by Sales for 13 to leave Bangladesh 31 for six in the 17th over.

They then belatedly brought up their half-century before losing three wickets for just one run.

Horton took his tally to six catches behind the stumps as Aspinwall took his second wicket and left-armer Boyden picked up two more as he recorded impressive figures of four for 16 from nine overs.

Ripon’s counter-attacking 33 included five fours and a six as the tailender added a modicum of respectability to the Bangladesh total.

Boyden dropped a catch at fine leg to deny Sales another wicket, but England did not panic and eventually a superb diving grab from Rew off the skipper Prest’s off-spin saw the back of Naimur after the last two had hung around for 11 overs.

England got off to a slightly nervy start with the bat as Bethell survived a run-out scare when SM Meherob could not gather the ball at the stumps with only five on the board.

He survived a close lbw appeal off Ashiqur shortly after before opening partner Thomas began to up the ante after a cautious start.

But having hit three fours, Thomas perished for 15 when he miscued another attacking shot off Ripon to leave England 20 for one in the ninth over.

That breakthrough gave Bangladesh a small glimmer of hope but when the English captain Prest nicked one behind off his counterpart Rakibul for just four soon after, the game was very much on.

However, Rew joined Bethell and together they batted superbly, counteracting the Bangladesh spin attack to alleviate any potential English nerves.

Bethell eventually paid for some hesitant running – which had been a feature of his innings – but by the time he was run out by Ariful for a well-made 44 from 63 balls the game was all but over.

Luxton strode out to the crease and promptly hit his first ball down the ground for six before Rew, 26 not out off 39 balls, hit the winning runs off the first ball of the 26th over.

England picked up a comfortable two points to go top of Group A ahead of their match against Canada on Tuesday while Bangladesh will look to bounce back on Thursday against the same opponents, who lost to the UAE in their opener on Saturday.