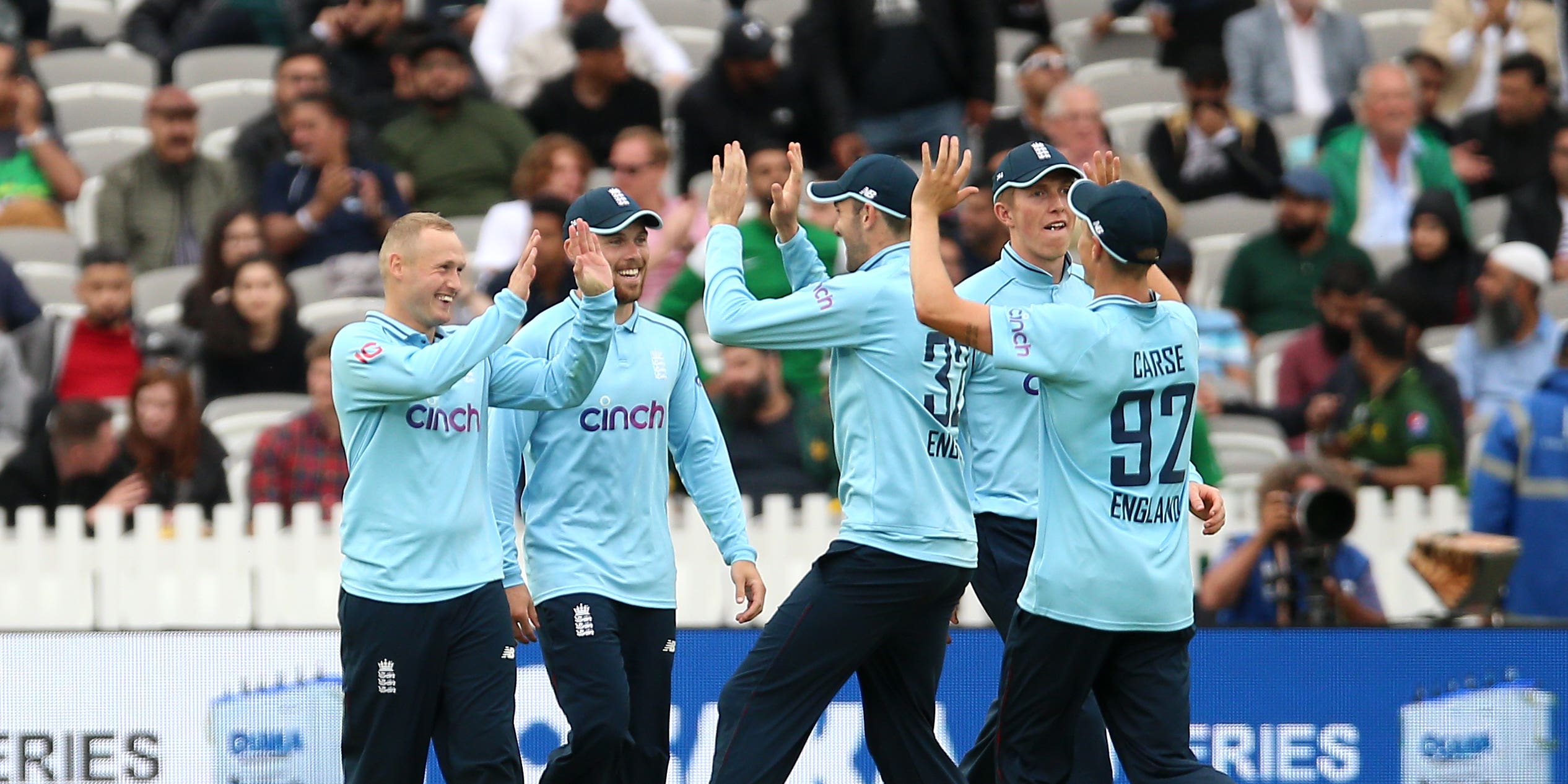 With no attendance limits in place for the first time since the onset of the pandemic, just under 23,000 fans roared the fresh-faced home side to a 52-run victory and an unassailable 2-0 lead.

With the first-choice squad still in quarantine after a Covid outbreak, the second string stepped up for the second time in three days. Phil Salt top-scored with 60, Saqib Mahmood was excellent again with the new ball, all-rounder Lewis Gregory paired 40 vital runs with three wickets and wicketkeeper John Simpson showcased some impeccable glovework.

The result was in the balance when England were bowled out for 247, but Pakistan finished well short on 195 all out against disciplined opponents.

England were asked to bat first after chasing successfully in each of their last four matches and soon found themselves in a spot of bother as Dawid Malan and Zak Crawley followed unbeaten half-centuries last time out with matching ducks.

Malan was the first of five scalps for Hasan Ali when he squirted to second slip, while Crawley saw his off stump flattened by a rocket of a yorker from Shaheen Shah Afridi.

It fell to rookie opener Salt to reset the tone and he began by sauntering down the pitch to Hasan and crashing him impishly for four. That was the highlight of a colourful knock, which contained 10 boundaries, a handful of fresh-air shots and a selection of edges. His 60 was more rambunctious than refined, but his fearless style did much to paper over the initial setbacks.

After an early nick fell short, James Vince had fun too. He poured himself into a selection of pulls and cuts and showcased his timing as he reached a career-best 56.

It took the introduction of spin to end a partnership of 97, Salt botching a sweep against Saud Shakeel and Vince foxed by Shadab Khan’s googly.

From there it was over to Hasan, who proceeded to dismiss Ben Stokes, Simpson and Craig Overton in the space of 10 deliveries.

There was no doubting the prize scalp, Stokes (22) aiming a mighty golf swing towards extra cover but misreading the angle and seam movement at the cost of his off stump.

England were vulnerable at 160 for seven, but were bolstered by a 69-run stand between Gregory and Brydon Carse (31). Both men were batting for the first time in ODIs but ran furiously, put away bad balls and held their nerve as they powered their side towards a competitive score.

Pakistan would still have been happy with their work but were quickly undermined by the loss of three wickets for 36 as they began their chase.

Gregory struck with his first delivery, pushed across Imam-ul-Haq who obliged with an edge, and would later return to see off Shadab and Haris Rauf to complete a fine all-round show.

Mahmood also impressed. For the second game in a row he got the best of Babar Azam, jagging one in hard at the world’s number one batter, beating the drive and winning a back-leg lbw. Scouring for nicks with pace and movement, he then had Mohammad Rizwan caught behind for five, and ended a formidable spell with four slips.

Fakhar Zaman survived the examination but retreated almost entirely, scraping together 10 from 45 balls before being put out of his misery by Overton. The Somerset seamer was punched back by Sohaib Maqsood, who swiped a pair of long sixes, but won the duel when a top edge sailed into Simpson’s gloves.

Having settled under that swirler, the 32-year-old soon had the chance to exhibit the breadth of his repertoire. When Faheem Ashraf flicked Matt Parkinson down the leg-side he probably expected to pick up four runs, but was stunned to see Simpson anticipate the shot and take a remarkable reaction catch.

Hasan launched a do-or-die assault, smashing 31 in seven deliveries including three consecutive sixes off Parkinson, but was bounced out by Carse before he had really made a dent in the target.

The leg-spinner also kept his nerve, having Pakistan anchorman Shakeel caught in the deep for 56, with Gregory and the diving Simpson finishing things off when Rauf gloved a bumper.