Inside the dressing room: Mutual respect after hard fought Ashes 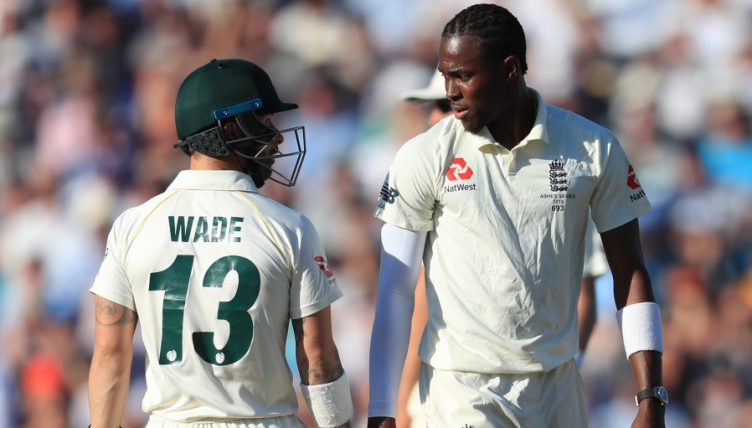 Jofra Archer and Matthew Wade left their Ashes rivalry on the pitch as they were spotted chatting and laughing during a drinks session of another kind.

After an intense period of bowling from Archer led to several staring matches between the pair, they were seen chatting and reminiscing for more than half an hour at the close of the final day’s play at the Oval.

It came as both teams shared beers in the wake of a drawn series full of drama, sledging and mind games.

England’s head of team communications Danny Reuben, who was in the dressing room after the game, said: “They spent a good 30-40 minutes together after the game chatting and reminiscing about the series, and also looking back at their times together in the Big Bash League,”

This is what it’s all about. The cut and thrust of Ashes cricket. Let’s just have a beer and reminisce. Why cricket is the best! #ashes #sport #summerof19 pic.twitter.com/Bpl5FEEG7E

“They’re good mates and obviously team-mates in terms of what they do together in Australia – they had a really good chat which was good to see.

Archer produced a spell of hostile bowling followed by some intense staring on the fourth day of the final Test in an attempt to remove Wade, who made a century as Australia fell short of a series victory by 135 runs.

Other personal battles included David Warner and Stuart Broad, the England bowler removing the Australian batsman no fewer than seven times in the series.

Australian coach Justin ranger has said Warner allowed Broad to get inside his head.

But Reuben confirmed that all players left the aggression on the field, with the players and staff coming together for a drink in the home dressing room afterwards.

Smith and Leach meanwhile were pictured together after the game, both wearing glasses.

Smith had been accused of mocking Leach after Australia retained the Ashes at Old Trafford, pictured on the pitch wearing a pair of spectacles.

However, head coach Justin Langer rejected such suggestions, and their demeanour after the match suggested all was well.

“I know Jack Leach and Steve Smith had a good chat and they were laughing and joking together,” Reuben said. “They’re all good mates.”

He continued: “We did the same in Australia after the Sydney Test 18 months ago and it’s always something that teams want to do straight after a series.

“We try to do it with most teams that come and tour England… for both teams to come together for a couple of hours at the end of the game in the home dressing room was good to see.”