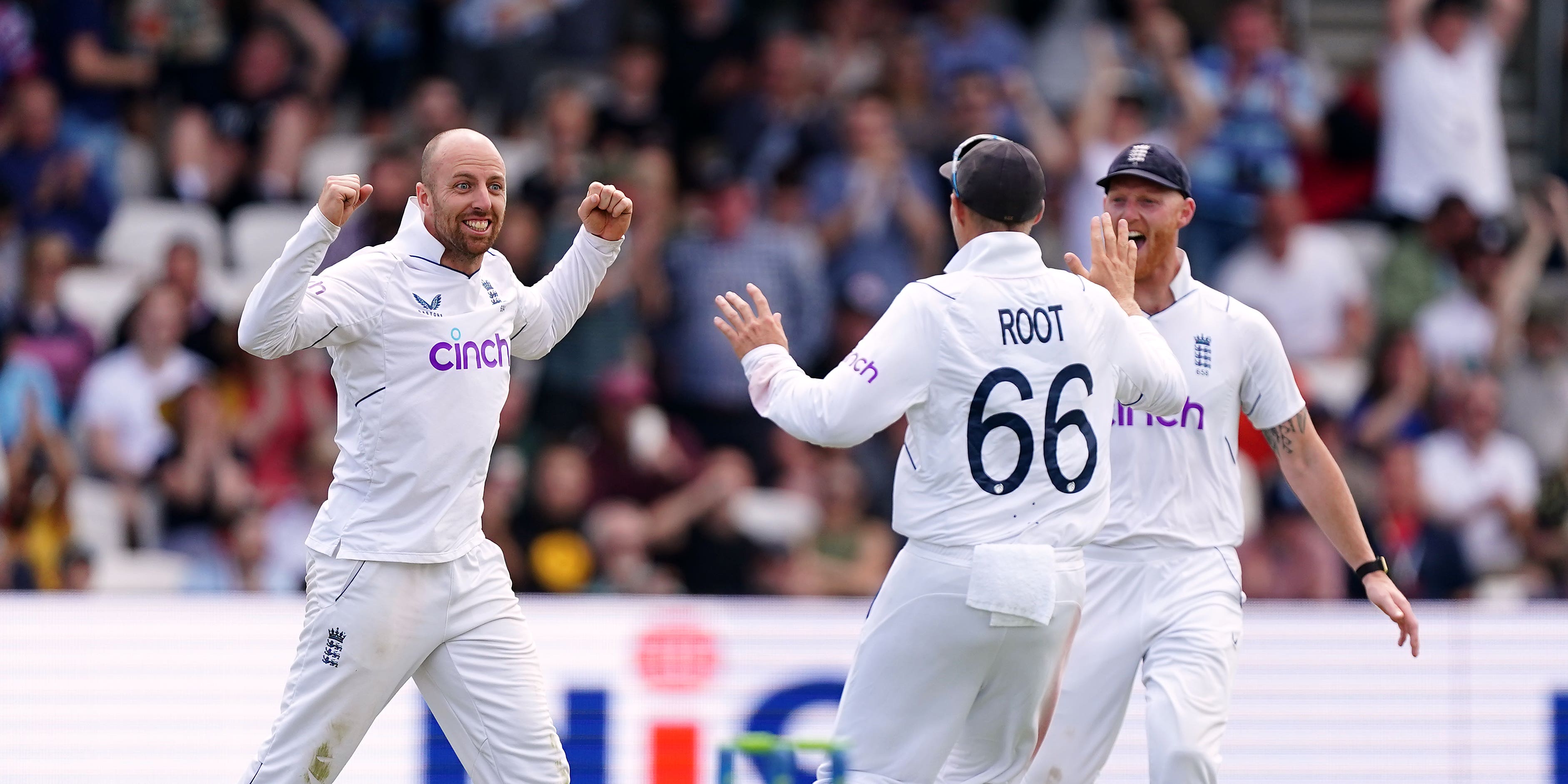 The Somerset spinner had not played a Test match on home soil since the summer of 2019 until England’s new leadership team put their faith in him at the start of the New Zealand series.

He then suffered a concussion while fielding on the very first morning at Lord’s, a misfortune that could have cost him his place after Matt Parkinson was drafted in as an emergency replacement for that match.

But Stokes and McCullum have held the line, picking him at Trent Bridge and again at Leeds, trusting him at key moments of the game and insisting on the kind of attacking fields that maximise his wicket-taking potential rather than minimise risk.

The rewards have come rolling in over the past four days, with Leach taking the first 10-wicket match of his Test career with five in each innings.

His efforts are a major reason why England are hot favourites to seal a 3-0 win on Monday, when Ollie Pope and Joe Root resume 113 runs from victory on 183 for two.

“I don’t know if I thought something like this was possible or not before, probably not,” Leach said.

“I think the biggest thing is having belief in myself and that’s what Ben and Baz have really helped me with. It looks like that’s starting to pay off.

“I am really enjoying working with Stokesy. I say ‘what about putting mid-on back?’ and he just says no. It’s really attacking and I am enjoying bowling like that as well. I’ve never experienced anything like the atmosphere in that dressing room, this positive way of doing things.

“In the long format of the game, with teams I’ve played in, a lot of the decisions are made around negativity, but this new way is extremely positive. It feels like you’re always pushing for that win.”

Leach already has fond memories of Yorkshire’s home ground, where he made cricket’s most famous one not out alongside Stokes in an Ashes classic three years ago.

And while he will never forget that, a career-best effort in his primary suit would surely trump it – provided the winning runs are chalked off at some point on day five.

“Does this feel better than 2019? At the moment, no. We just need to get the win and then it will be very special,” he said.

“It probably hasn’t sunk in but it feels great. I’ve got two match balls to keep, one for each innings. I’ll give them to my dad, he’s got a collection of all my five-for balls.”

New Zealand felt like a beaten team on the fourth evening, unable to stem the flow as Pope (81no) and Root (55no) scored freely in a century stand that made light of the steep 296-run.

The Kiwis have battled hard all series and would be poorly served by a 3-0 scoreline, but Tom Blundell has vowed that they will keep scrapping.

The New Zealand wicketkeeper has shared four different hundred partnerships with Daryl Mitchell, but faces the prospect of having nothing to show for his work.

“It’s been fantastic to bat with Daryl and have those partnerships, it’s just unfortunate a couple of results haven’t gone our way,” he said.

“This team has been known as a team of fighters. So we’ve just got to fight. We’ve got to come out first thing and put a couple of wickets on the score. You never know, tomorrow is a new day.”