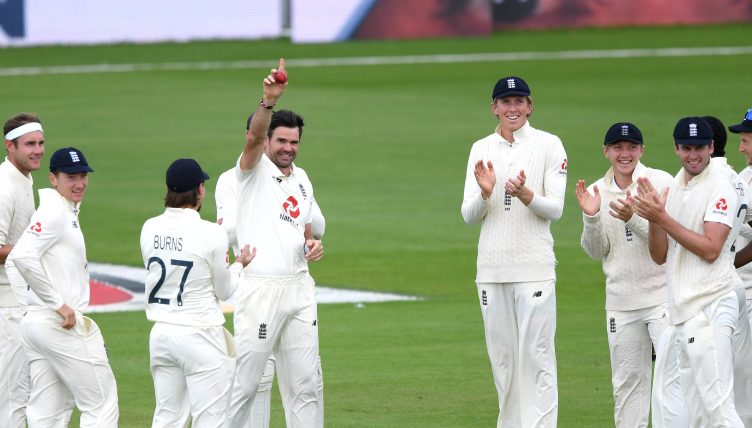 James Anderson’s history-making, record-breaking career reached a new peak as he became just the fourth bowler, and first ever paceman, to take 600 Test wickets on the final day of England’s series against Pakistan.

The match itself ended in the inevitable rain-affected draw, handing the hosts a 1-0 series win as Pakistan finished 123 behind on 187 for four in their follow-on, but Anderson’s dismissal of touring captain Azhar Ali ensured this outing at the Ageas Bowl will not be forgotten quickly.

Anderson woke on Tuesday morning with 599 to his name and faced a long, nervy wait as a saturated outfield kept the teams in the pavilion until 4.15pm.

With the pandemic causing uncertainty over the global touring calendar England do not know when or where they will next don their whites and, at 38, Anderson would be forgiven for entertaining some doubts.

But, in the end, the wait was a trifling one in the context of his 17 years and 156 Tests on the international scene.

Spared the toil of running into a punishing headwind by Jofra Archer, he landed the long-anticipated blow with his 14th delivery of the day. Having located a touch of reverse swing with the ageing Dukes, he drew Azhar in around off stump and found a hint of extra bounce that lifted the ball into the
shoulder of the bat and high towards Joe Root at first slip.

Anderson had already watched four chances go down off his bowling across the previous two days, each one darkening his mood just a little, but this time his captain made no mistake.

Root, who had set an inventive field and had no company in the cordon, held on at head height to kick off the celebrations.

Anderson finally cracked a smile that had been a long time coming, thrusting his two index fingers towards the sky as his face showed a combination of joy and relief.

Only three other players have ever experienced a comparable achievement, with spin greats Muttiah Muralitharan, Shane Warne and Anil Kumble welcoming a new arrival to their exclusive club.

The team soon formed a circle around the man of the moment, with Anderson receiving a standing ovation from the team balcony and further acclaim from the boundary edge where 12th men Mark Wood and Jack Leach joined in with assistant coach Paul Collingwood.

The stands were empty, as they have been throughout this unique bio-secure summer, but Anderson held the ball aloft to toast the moment all the same.

His journey started back in 2003 at Lord’s when he bowled Zimbabwe opener Mark Vermeulen on debut at Lord’s and in Azhar, who made an unbeaten 141 in the first innings, he had a worthy latest adversary.

If it sounds for a moment as though one man’s personal pursuit had overtaken the wider context of the game, then that is broadly accurate. So much time had been lost to the inclement weather that a positive result needed Pakistan to tumble in a heap from their overnight position of 100 for two.

With Archer and Broad both drawing a blank in their initial burst and Anderson turning in another two overs without success, that chance slipped away. Dom Bess had a chance to end a difficult series on a high but the Somerset spinner found Babar Azam a particularly thorny opponent, and it was the latter who topped up his tally as he cruised to 63 not out.

Root suffered a few blows of his own after giving himself a late spell, while opening batsman Dom Sibley turned in comically messy over of his lesser spotted leg-spin.

Root picked up Asad Shafiq (21) in his sixth over, substitute fielder James Bracey hanging on well at short-leg before the hosts took one last dip with the second new ball.

Anderson was given a shot at starting the road to 700 but had to settle for two in the innings and match figures of seven for 101 as the teams shook hands on a draw.