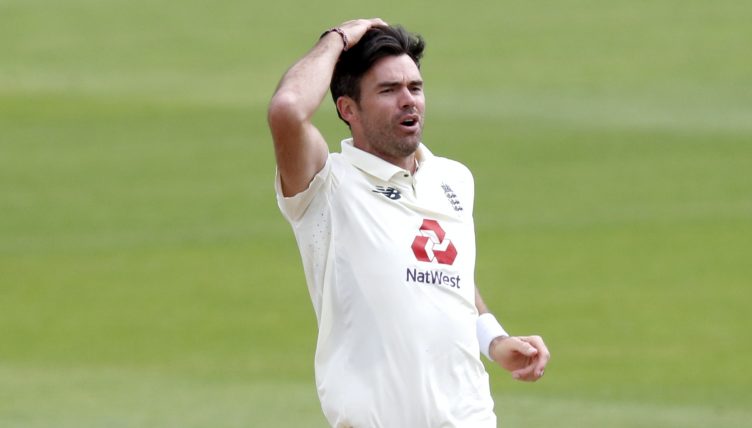 James Anderson moved to 599 Test wickets on the penultimate day of England’s decider against Pakistan, denied the opportunity to reach the magical 600 mark by a dropped catch and more bad weather.

All eyes were on the 38-year-old as he renewed his quest to become just the fourth bowler in history to reach the landmark, and the first paceman, but he was only able to add one more scalp on a frustrating day.

England’s wider hopes of finishing the tourists off for a 2-0 series win also faded, with Pakistan reaching 100 for two in their follow-on, still 210 behind but scrapping hard for the draw.

Anderson saw Shan Masood’s edge inexplicably put down by wicketkeeper Jos Buttler in his third over of the morning and, following a lengthy rain break, did not open his account until shortly after 6pm, Abid Ali joining a long list of lbw victims dating back 17 years.

With the floodlights on and the clouds gathering he looked a certainty to grab another before the close, but the light faded quickly enough for the umpires to call for spin at both ends before leading the teams off shortly after.

Having already watched four catches go down off his bowling in the match, and with another worrying forecast for day five, Anderson could be forgiven for wondering if the hunt would go on until 2021.

The Lancastrian had led his team out in the morning session, clearly eager to get into his work.

Azhar Ali had originally planned on opening the batting, carrying straight on after finishing the first innings 141 not out, but after a night’s rest he was happy to return to his usual spot at number three.

Anderson would still have fancied his chances of swift success but, although he settled quickly into a rhythm, it was soon apparent that there was no real swing and no major assistance from the surface.

When he did conjure a chance in his third visit it was by hanging one a little wider outside off stump and inviting Masood to free his arms. The left-hander obliged by aiming a wayward drive towards extra-cover but instead saw a thick edge sail through to the wicketkeeper.

It was the kind of chance that gets held 99 per cent of the time, but somehow Buttler got his timing wrong and failed to gather cleanly.

Anderson, whose mood had been simmering when he saw three drops in the space of 10 deliveries on day three, was once again aghast but almost mustered a disbelieving smile as he returned to the top of is mark.

His first five-over burst was typically tidy, costing just nine runs including a set of four overthrows from substitute fielder James Bracey, who was an early replacement for the injured Ollie Pope. Crucially, though, there were no further chances as Anderson and his fellow seamers came up short.

Rain forced the teams off at 12.15pm, initially a light spray and then an almighty deluge that ensured no further play until 3.45pm.

That was more than enough time for Anderson to rev himself up for another go and there was no shortage of purpose as he charged in for four overs at good pace.

Abid, playing a quietly impressive hand as he led his side’s rearguard, was struck on the hand at one point and required treatment before carrying on.

This time Anderson managed four overs, pushing hard and beating the bat a couple of times, but ultimately making way for Dom Bess as Root followed a couple of lengthy exchanges with a change at the Hotel End.

Broad had experienced his own day in the sun when he claimed his 500th wicket against the West Indies last month and elbowed his way back into the conversation when he finally broke the deadlock.

Masood had been mostly passive for his 18 runs and it was somewhat fitting that he fell playing no shot, leaving one that held its line and clipped the pad in front of off stump.

The opening stand had put on 49 runs, eaten up plenty of time and carefully kept Anderson out of the spotlight. On another day the glare might have been on Bess, who has been lightly used since being named as the country’s first-choice spinner.

Here he was given a decent workout and the kind of game situation that he will need to master if he is to hold the role in the long-term. There was nothing overly loose, no big drag downs or unmissable half-volleys, but while his figures stayed tidy he was not able to generate any consistent pressure.

Jofra Archer also remained wicketless for the match but conceded less than a run per over as Abid and Azhar retreated further into defence.

Anderson eventually had cause to celebrate deep in an extended final session, finding a hint of swing and a slightly lower bounce to trap Abid for 42.

It was a tight call, but Anderson had earned a slice of luck. It did not last, with the murky conditions restricting him to just eight more balls before stumps were pulled.