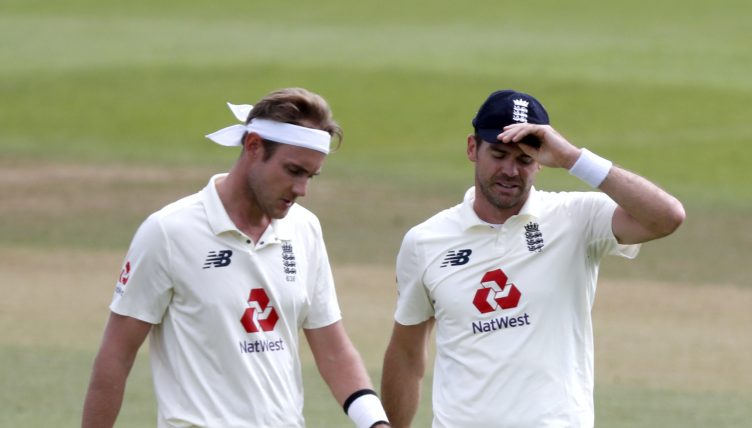 James Anderson remained frustrated in his quest to reach 600 Test wickets on the penultimate day of the third Test against Pakistan, with Stuart Broad managing a solitary breakthrough.

All eyes were on Anderson on the fourth morning at the Ageas Bowl, with the 38-year-old taking the field on 598 and with high hopes of becoming just the fourth bowler in history, and first paceman, to reach the milestone.

He would have moved to 599 had Jos Buttler not made a mess of a regulation chance behind the stumps early on but that drop – the fourth of the match against Anderson’s name after three went down in the space of 10 deliveries on Sunday evening – and a rain delay of nearly three and a half hours thwarted him.

A huge downpour kept the teams off from 12.15pm to 3.45pm and when they returned Anderson drew a blank from a testing four-over blast that left him with figures of 9-3-14-0. It fell to Broad, who joined his team-mate in the 500 club against the West Indies last month, to get the first of the 10 wickets England needed to secure the game.

At 5pm the tourists, who had followed on 310 behind, were 61 for one with more than two hours of play still possible in an elongated evening session.

Shan Masood, who had been the lucky recipient of Buttler’s poor glovework in the fifth over of the day, driving waywardly as Anderson threw out a tempter in the channel, was the man to go.

He had shared a 49-run opening stand with Abid Ali, successfully deterring England for almost 24 overs and seeing off the new ball, before he offered no stroke to a ball that slanted across him but held its line.

When the ball thudded into his front pad umpire Michael Gough was persuaded to give the lbw, with a DRS referral from the batsmen coming in vain.

Pakistan captain Azhar Ali was in at number three, having reversed his decision to opening the batting late on day two when he had finished the previous innings 141 not out.

Meanwhile, there was bad news for Surrey’s Ollie Pope, who injured his left shoulder at the start of the day and was replaced in the field by Gloucestershire’s James Bracey. Further assessments will be made but Pope has had prior problems with his shoulder and could face a spell on the sidelines.