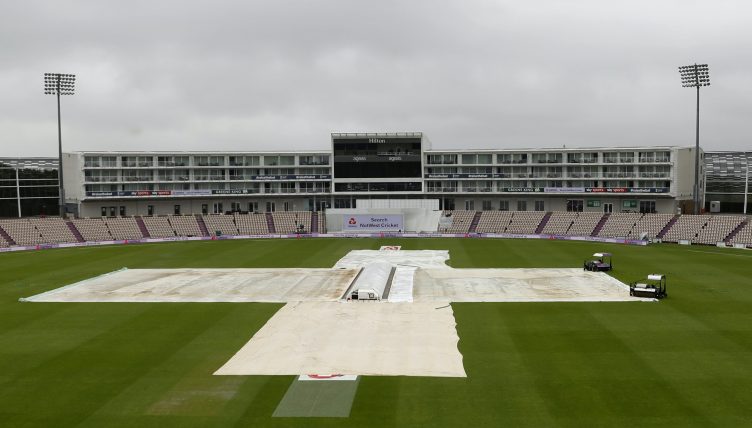 James Anderson’s pursuit of a 600th Test wicket and England’s hopes of pushing for victory on the final day of the third Test against Pakistan got off to a frustrating start as heavy rain delayed play at the Ageas Bowl.

Anderson ended day four on 599 career scalps after removing Abid Ali just before bad light intervened on Monday evening. Persistent showers overnight and in the morning left the outfield saturated as the planned 11am start came and went without any sign of activity from the pavilion.

One more wicket would make the 38-year-old just the fourth player in history to reach the landmark and the first paceman, following spinners Muttiah Muralitharan, Shane Warne and Anil Kumble. If he fails to reach the milestone in Southampton he faces a lengthy wait for another chance, with no Test cricket planned until the new year and wider uncertainty over touring schedules amid the coronavirus pandemic.

Pakistan’s innings is paused at 100 for two, a deficit of 210 after being asked to follow-on, with England hoping for enough playing time to get the eight wickets they need to seal a 2-0 series win.

Speaking at close of play on day four, head coach Chris Silverwood spoke of his hopes that both Anderson and the team would get the perfect finish they wanted after more than two months in a bio-secure bubble.

“I want to win the game first and foremost but to finish strongly and see Jimmy get his 600th would be fantastic,” said Silverwood.

“We’re all aware of the milestone Jimmy is looking at but he’ll get there. It would be brilliant to see him get over the line here. If we get an opportunity, we’ll go for it.

“For the guys to come out and put their best foot forward and finish in the same way we’ve played the last two series would be nice. I’m very proud of how they’ve handled themselves, being locked up for the best part of 10 weeks in the bubble – their attitude and effort during that time has been fantastic.”

There is little yet to be said in tribute to Anderson, who has built a 17-year body of work that may never be matched. But as a player who laboured hard to take 11 Test wickets, Silverwood’s personal appreciation runs deep.

“He’s an inspiration, isn’t he?” he said. “Six hundred Test wickets… Wow. He’s worked so hard to do it and he’s brilliant around the place. He’s constantly helping the other bowlers. It’s just superb to have one of the best in the world sat in your dressing room and playing for your country.”