James Fuller sizzles with hat-trick as Hampshire triumph against Surrey 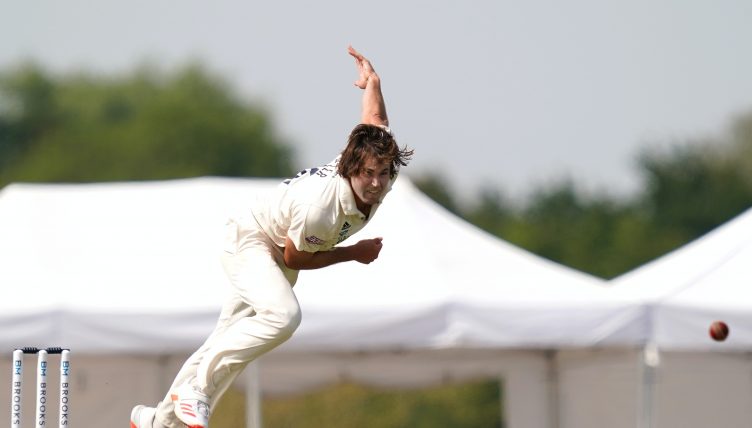 Fuller finished with four for 17 as Hampshire bowled Surrey out for 74 to win by an innings and 52 runs at Arundel.

Hampshire have now won back-to-back matches in the competition and took 21 points from the contest, while winless Surrey claimed three.

Essex are on course to reach the final after a thrilling three-wicket win over Sussex at Hove left them with the only 100 per cent record in the competition.

Simon Harmer set up victory by claiming his 20th five-wicket haul for the county champions as Sussex were bowled out for 141 in their second innings, leaving Essex with a target of 196 in 52 overs.

George Garton revived home hopes with four wickets, including Alastair Cook for the second time in the match, and when Mitch Claydon took two wickets in an over they were seven down needing 24 to win.

But Paul Walter and Aaron Beard held their nerve, Beard hitting the winning boundary with 6.1 overs to spare.

Fell’s unbeaten 110 allowed the Pears to declare on the final morning and set Northamptonshire 263 in 68 overs and Joe Leach’s side easily defended that target as the hosts were bowled out for 184.

Dillon Pennington did the damage with three for 30, with Josh Tongue claiming three for 38.

Somerset were left frustrated as rain prevented them from closing out victory against Warwickshire at Edgbaston.

Needing 292 to avoid an innings defeat, Warwickshire resumed on the final day on 104 for six and after being second best for the duration of the match they finished on 140 for eight to secure a highly unlikely draw.

Only 15.4 overs were possible on the final day and infuriatingly for Somerset the entire post-tea session, in which there was scope for 37 overs, was washed out before the call-off finally arrived at 5.13pm.

Elsewhere, Nottinghamshire and Lancashire drew at Trent Bridge, as did Kent and Middlesex, Glamorgan and Gloucestershire and Yorkshire and Derbyshire.