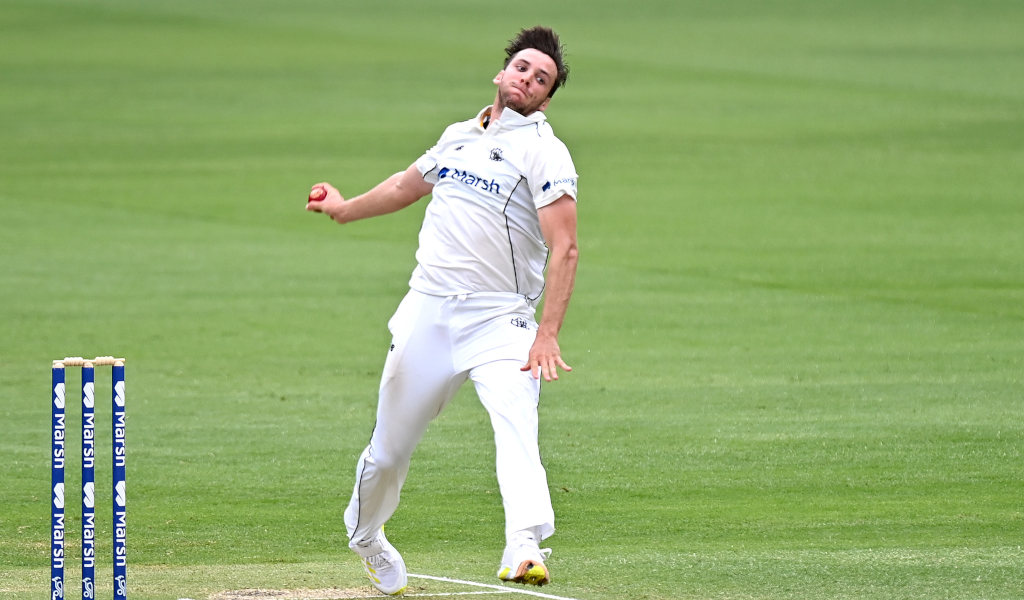 Western Australia quick Jhye Richardson has put his hand up for Ashes inclusion with a fearsome display of fast bowling against Queensland at the Gabba.

Richardson’s Test experience has been limited to a pair of home Tests against Sri Lanka in early 2019.

The much-vaunted “big three” Pat Cummins, Josh Hazlewood and Mitchell Starc have so far kept the 25-year-old from adding to his two caps.

Richardson showed why he should be considered for the Ashes squad ahead of what could be the most mentally taxing battle for the urn in the modern era thanks to bio-security protocols.

The fast bowler accounted for Queensland’s Test players Joe Burns and Marnus Labuschagne and received high praise from the former after play on day three of the Sheffield Shield match between WA and the Bulls.

He dismissed Burns in both innings bagging 3 for 38 in the first innings as Queensland crumbled to 129 all out.

Richardson had Labuschagne caught behind with the ball of the day; a delivery that reared up of a length and took a feather-edge through to the keeper.

Aside from displaying great venom, he was also very disciplined sending down 13 maidens in his 22 overs.

“He’s a fantastic bowler,” said Burns after play. “Jhye’s done it for a number of years now and he’s done well for Australia as well.

“I’m a big fan of him. He just bowled the right lengths, and he got us playing. He bowls well in these sorts of conditions – at the Gabba and the WACA – and he bowled the house down today.”

Richardson will be in the hunt for a five wicket haul when play resumes on day four with Queensland sporting a 92-run lead with their last pair at the crease.

The young quick already has a Test five-wicket haul at the Gabba and his ability to probe England’s top order is something selectors will have to consider.

The match also served to enhance the reputation of T20 gun Josh Philippe in red-ball cricket, as he smashed 129 to power WA to a big first innings lead.