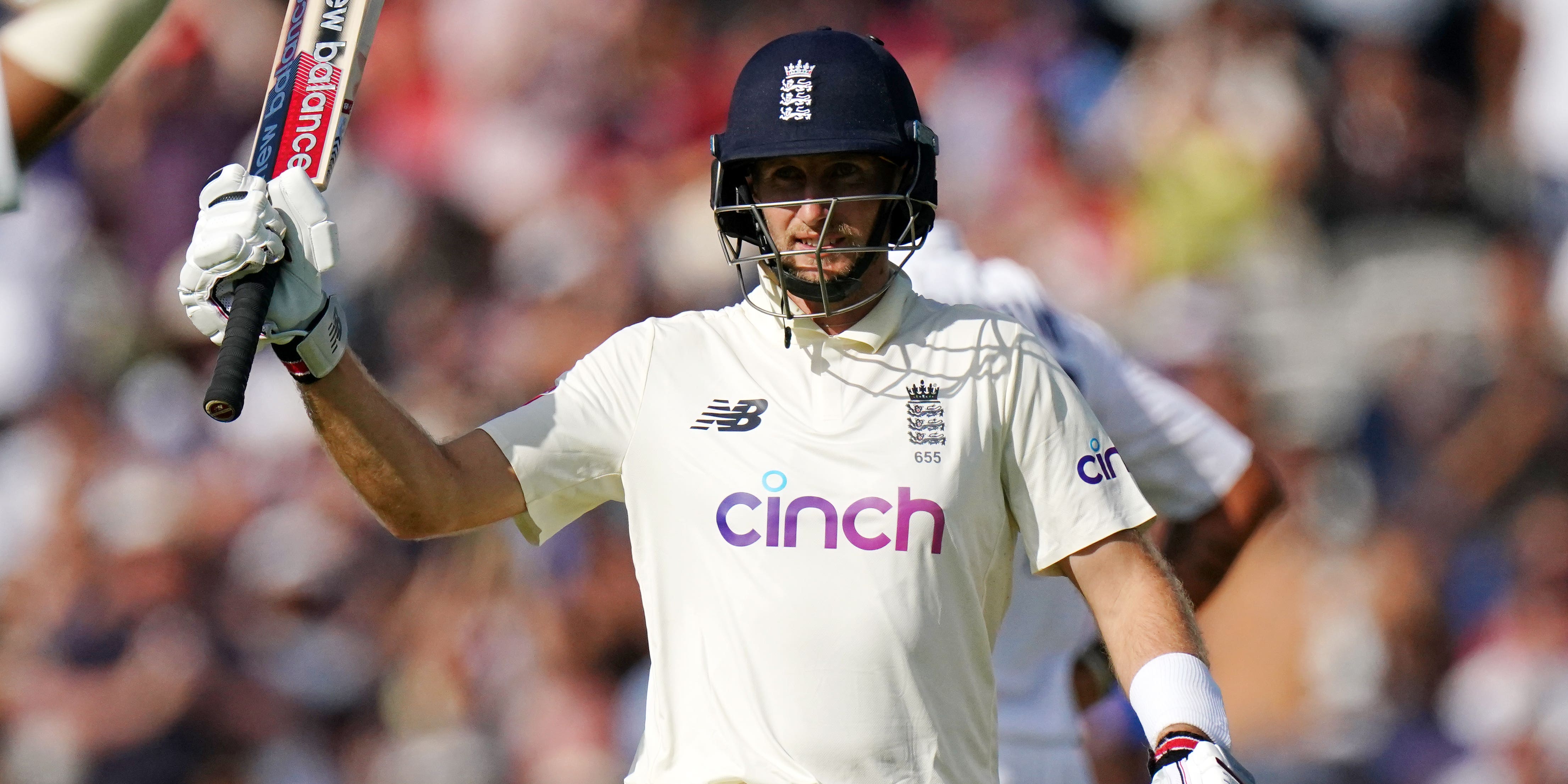 England captain Joe Root reeled off his fifth century of the year at Lord’s, standing head and shoulders above the crowd and changing the face of the second LV= Insurance Test against India.

After his match-saving hundred at Trent Bridge last week, Root went big again at the home of cricket, undefeated through the entire third day to finish on 180 not out.

England reached 391 all out on the back of his stunning efforts, enough for a lead of 27 that had looked fanciful after India dominated the first day, and Root’s own average tipped back above 50 as a result.

Since turning 30 in December Root has been in revelatory form, with knocks of 228 and 186 on the turning tracks of Galle, 218 against India in Chennai and 109 under serious pressure in the rain-affected draw at Nottingham.

Among Englishmen only Denis Compton and Michael Vaughan have scored more hundreds in a calendar year and, with three more Tests remaining this summer, his current purple patch suggests he could join them on six sooner rather than later.

His latest instalment was another high-class example of his craft, resuming on his overnight score of 48 not out and adding another 132 in the next six and a half hours at the crease.

Control was the hallmark of Root’s innings, absorbing everything India threw at him on a serene surface and collecting 18 boundaries in the course of a 321-ball epic.

Root and fellow Yorkshireman Jonny Bairstow resumed with the score at 119 for three and proceeded to consign their opponents to a wicketless first session. They scored 97 chanceless runs in 28 overs, scoring busily as they refused to allow the seamers to settle on a safe line.

Root reached his half-century off the seventh ball of the day, pushing Mohammed Siraj to the point boundary and raising his bat to acclaim for the first time. He would do so several more times before the day was done.

Bairstow also played an important role in the opening session, shaping up well and scoring with authority. The number five was striking the cleanly square of the wicket, leant on one memorably classical straight drive and even swept the spin of Ravindra Jadeja over his shoulder as he followed Root’s lead to reach a first fifty in two years and 20 innings.

India used Siraj as a battering ram at the start of the afternoon session, a ploy that did nothing to ruffle Root’s feathers but unsettled Bairstow. After ducking into one bouncer and wearing it on the shoulder, he was undone by another, swivelling into a hook but gloving gently to slip for 57.

Root was laser-focused on reaching his hundred and even the arrival of the second new ball did not break his concentration. A sharp piece of fielding on the rope left him on 99 but he had enough to composure to drop Jasprit Bumrah into the off-side and nod Jos Buttler through for the single he needed.

Lord’s rose to fete a familiar hero and did so again a few moments later as a flick to fine leg took him past 9,000 Test runs – the second youngest batsman to reach the mark after his predecessor Sir Alastair Cook.

Root coasted through stands of 54 and 58 with Buttler and Moeen Ali, who both hit a couple of pleasing strokes before getting stuck. Ishant exploited a big gap between Buttler’s bat and pad to bowl him for 23, while Moeen managed an entertaining flurry before tea only to retreat entirely after the break.

Ishant eventually snared his outside edge for 27 and condemned another left-handed all-rounder, Sam Curran, to a first-ball duck. Root, just as he had done at the start of his innings, ensured there would be no hat-trick.

Root had fought hard to for the chance to give his side an unexpected first-innings lead but they were still seven behind when Siraj had Ollie Robinson lbw. He had the satisfaction of overtaking the Indian total when he whipped yet another four off his pads just before 6pm, but was partly responsible for Mark Wood’s run-out moments later.

With James Anderson in place as his eighth partner of the day, Root produced some late fireworks – ramping Siraj outrageously over the slips then stooping to slog-sweep him over midwicket. The number 11 was bowled off the last delivery of the day, leaving Root fittingly unbeaten.