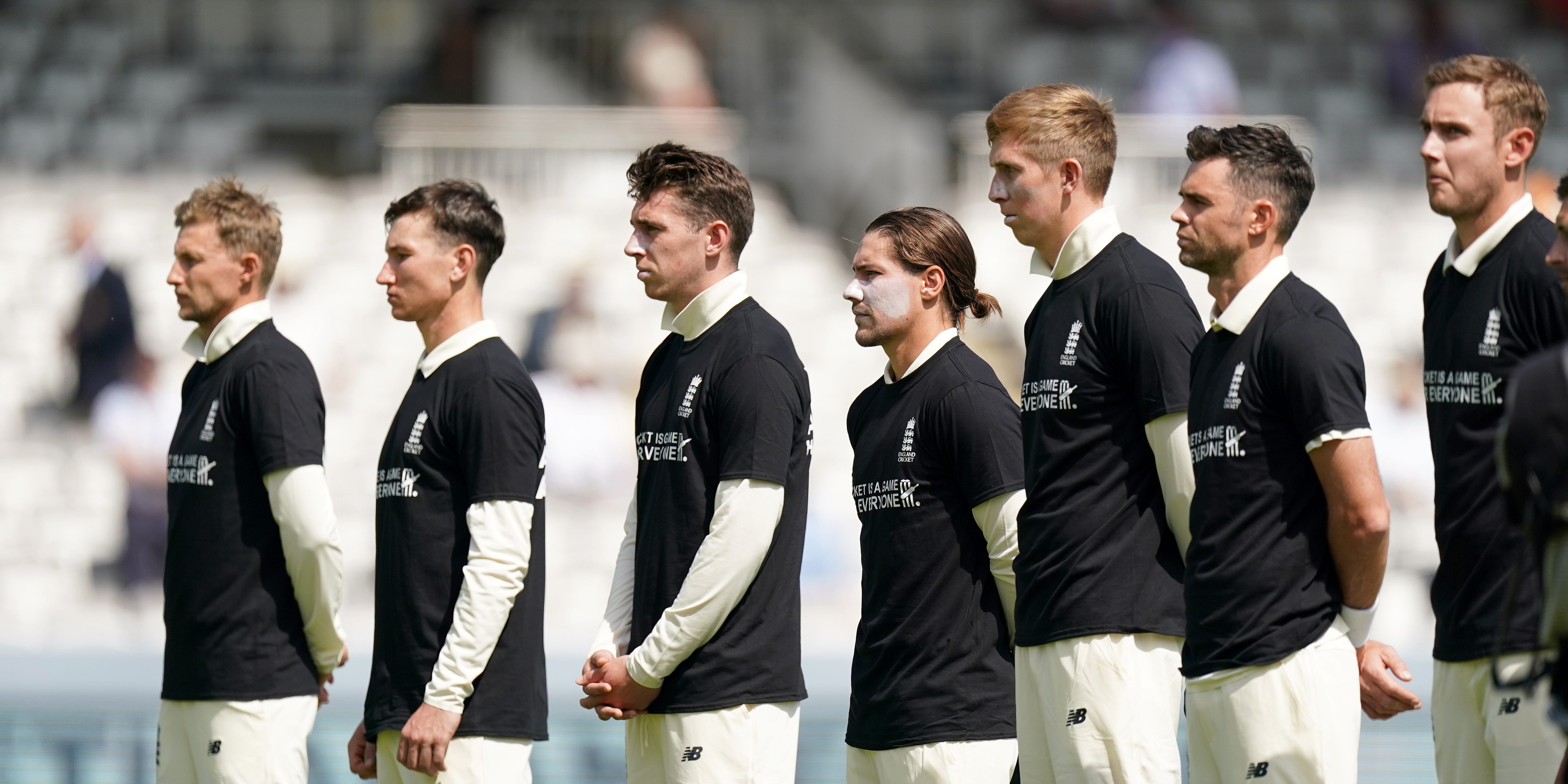 England will again wear anti-discrimination t-shirts at the start of Thursday’s second Test against New Zealand, with captain Joe Root insisting the ongoing Twitter controversy has not derailed the commitment.

Root’s team made a collective statement at Lord’s last week by wearing black t-shirts bearing the slogan “cricket is a game for everyone” and seven different designs highlighting specific forms of prejudice.

They also stood with their opponents in a ‘moment of unity’ to show their shared values before the first ball was bowled, though the atmosphere was soon shredded by the emergence of racist and sexist tweets posted several years earlier by debutant Ollie Robinson.

The England and Wales Cricket Board has suspended the seamer pending an investigation and resolved to look into potentially offensive material posted by other members of the national side.

Despite that, Root made it clear his side will make another public gesture at Edgbaston.

“It’s been an uncomfortable week for everyone. But we have committed to making a positive change in our sport. That doesn’t change just because of what’s happened,” he said on the eve of the match.

“Of course there have been some uncomfortable things come to light over the past week and we have to own that and accept that. We are still very much committed to that, even in light of what’s happened. That’s not going to sway us. If we can do that and keep trying to spread that message, a lot of good can come off the back of some bad stuff that has happened in the last week.”

While Root has clearly devoted a great deal of time and thought to the matter, it only forms part of his responsibilities as England Test captain. For the next five days his overwhelming priority will be earning a win in Birmingham, thereby stealing the series after coming off second best in last week’s rain-affected draw.

“As professionals, we know we have a job to do this week. When we start training our full focus is preparing for that Test match and making sure by the start of the game we are fully engaged,” he said.

“We certainly have used the last two days to prepare ourselves as well as we could. That will be exactly the same tomorrow and make sure we are absolutely ready to go.”

With Robinson no longer part of the squad and Mark Wood highly likely to be rested, there are due to be two vacancies in the XI. Olly Stone can bank on taking up one of those at his home ground, guaranteeing England one 90mph quick, with the final spot a close call between Somerset duo Craig Overton and Jack Leach.

The hot, dry conditions that are expected this week could play into the left-arm spinner’s hands, but England could also view Overton’s superior batting as a handy bulwark against an otherwise vulnerable tail.

“It’s something we will have to consider. Without that genuine all-rounder, which we normally have had with the likes of Chris Woakes, Sam Curran and Ben Stokes, it does change things slightly,” Root said.

“It’s going to be lopsided whichever way we balance it. We’ll feel like we’re missing something.”

England are also looking forward to playing in front of a maximum 17,000 fans each day, their biggest home attendance in almost two years given the Test’s status as a Government pilot event. Having settled for a timid draw last time out, Root insisted he would like to reward the crowd with an adventurous approach if possible.

“We’re all very aware we’re in the entertainment business,” he said.

“If the opportunities arise we’ll definitely look to be aggressive. I don’t want us to be considered a negative team who play a boring brand of cricket. We have some very exciting players who are capable of some wonderful passages of cricket and hopefully that will come to light this week.

“It will be great to have (that many) people in, enjoying the sport again in pretty much a full house. It’s something we’ve missed as a side and are very much looking forward to. We can’t wait to experience five good days of cricket along with everyone else in the crowd.”