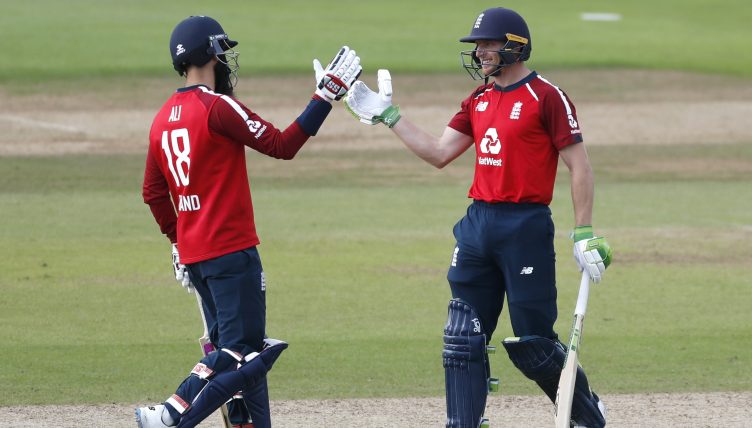 Jos Buttler admitted he had missed playing Twenty20 cricket and revealed the recent success of his England team-mates helped drive him on in the second international with Australia.

The wicketkeeper carried his bat to score 77 not out and secure a 2-0 series victory for Eoin Morgan’s side after they successfully chased down 158 at the Ageas Bowl.

It was Buttler’s highest international score in the sprint format and backed up an impressive summer of Test cricket where he hit 152 against Pakistan in addition to a couple of half-centuries after calls for him to be dropped.

While the 29-year-old bats down the order in red-ball cricket, his favoured position in T20 is at the top but there was some debate about whether he would open following Tom Banton’s exploits last month.

Morgan kept faith with England’s gloveman and he has been vindicated with scores of 44 and now an unbeaten 77 during this series with Australia.

Buttler said: “It is amazing how it can turn around isn’t it if you hang in there long enough?

“I have really missed playing T20 cricket and I was looking forward to this series because it has been a long time since I played white-ball cricket. It is something I really enjoy playing, I love the format and I am feeling in good touch.

“When you play against Australia it gives you a lot of determination to play well and I think the competition for places in the side has really been driving me as well.

“The guys have been coming in and playing well and when you miss out, you feel that pressure so to come back in you feel like you have to play well.”

Jofra Archer set the tempo for the day when he hit speeds of over 90mph early on and David Warner lasted three balls before he gloved to Buttler.

Mark Wood operated in tandem with his fellow fast bowler and sent Alex Carey back for two and when Morgan brilliantly ran out Steve Smith for 10, Australia were on the ropes after losing Friday’s opener by two runs.

Aaron Finch, who top-scored with 40, staged a recovery alongside Marcus Stoinis, but Chris Jordan picked up two wickets while Adil Rashid finished with one for 25 to restrict the opposition to 157 for seven.

Buttler added: “As an opening batsman the last person you want to face first up is Jofra Archer with a brand new ball. Pace can create wickets, it creates doubt and those two have pace in abundance and Jofra and Woody, not only do they bowl fast, but they have fantastic skills.”

Dawid Malan was unable to make another fifty, but added 42 in quick time and put on 87 for the second wicket with Buttler.

Ashton Agar made the breakthrough on his way to figures of two for 27 and when both Banton and Morgan went in quick succession, it felt like a case of deja vu at the Ageas Bowl given Australia had collapsed on Friday.

Moeen Ali made sure that was not to happen with 13 off six balls and Buttler finished proceedings with a huge maximum down the ground to seal a victory by six wickets.

The opener, as he so often does in white-ball cricket, was England’s finisher and the full repertoire of his armoury was on show with sweeps and drives aplenty in Southampton.

On this occasion he combined batting at the top with taking the team home, but he would be willing to bat down the order if asked.

Buttler said: “It probably is my favoured position to bat in T20 cricket. I’ve had most of my success at the top. I think that is natural, if you bat in the top three in T20 cricket it is the best place for anyone.

“We probably have eight or nine guys who would stick their hand up to bat in the top three. I am very happy there but I am also very happy to do what the team needs from me.”

Mitchell Starc conceded Australia needed to get Buttler out early with the England opener taking his time and only on 25 off 24 at the halfway stage.

He added: “We would have liked to have got him out in the powerplay, so it’s something the bowlers will have to chat about. Our batters are going to have their own plans and play their own way.

“I don’t think there are too many that bat exactly like Jos. He’s someone who moves around the crease a lot, so does Smithy I guess.”