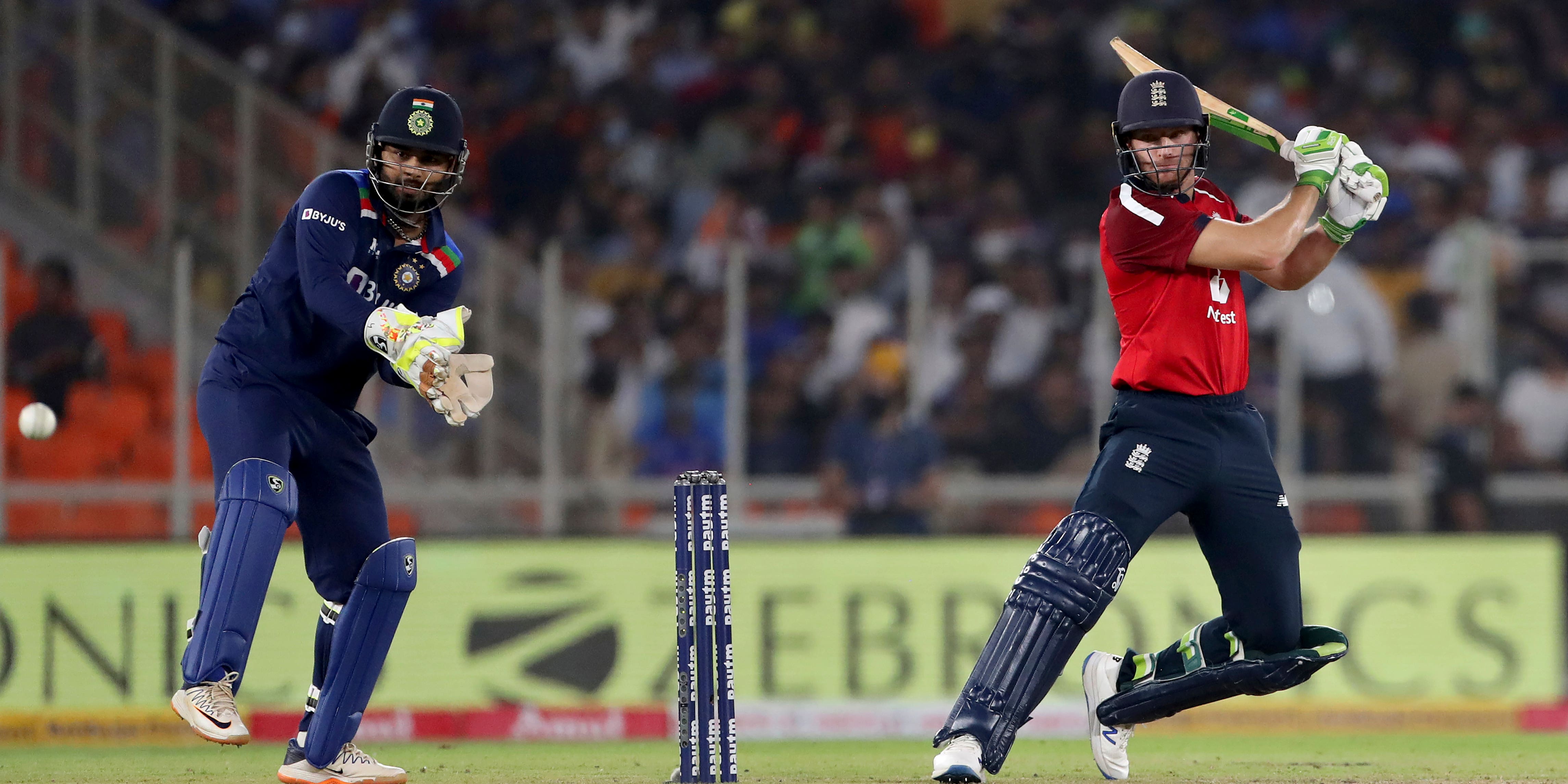 Jos Buttler and Virat Kohli traded brilliant innings in Ahmedabad, but it was the Englishman who came out on top as the tourists reclaimed the initiative in their Twenty20 series against India.

Buttler’s career-best 83 not out was the match-winning knock in an eight-wicket success, putting his side 2-1 up after three matches and seemingly settling any question about his best role in the team.

He made his name as a ‘finisher’ and is now used in the middle order by Rajasthan Royals, but England are convinced he should open the batting and, by taking a chase of 157 by the scruff of the neck and refusing to let go, he made good on that.

With four sixes and five fours, Buttler was at his considerable best throughout his 52-ball stay and may well have reeled in a maiden century had Jonny Bairstow not joined in with a lively unbeaten 40 at the end.

England would have been chasing much less had it not been for Kohli’s latest classic knock of 77 not out, which powered India’s score from 87 for five after 15 overs. Having scored 28 off his first 29 balls, the captain blitzed 49 off the next 17.

England had started with a near perfect powerplay, restricting India to just 24 runs while also picking off the top three.

Mark Wood was absent from Sunday’s defeat with a bruised heel and it was his return which lifted things.

After two tidy overs from Adil Rashid and Jofra Archer, Wood needed just three balls to make a mess of KL Rahul’s stumps. A handy mix of pace and movement was more than enough to continue the opener’s dire sequence which has seen him score just one run in his last four innings.

Wood’s next victim, Rohit Sharma, was done by fast thinking as much as fast bowling. Spotting the batsman moving towards leg, Wood followed him with a smart short ball that Rohit could only flap to short fine-leg.

That brought together Kohli and Ishan Kishan, who shared a match-winning stand of 94 in the previous game, but the latter could not build on his eye-catching debut.

Taking on a short ball from Chris Jordan he top-edged a pull straight over his own head and into Buttler’s gloves, leaving Kohli to see out a rare wicket-maiden.

Together with Rishabh Pant, Kohli added 38 but the stand barely progressed from run-a-ball territory.

With pressure mounting they tried to pick up an extra run after Buttler failed to gather a return throw cleanly, but Pant had already over-run the crease and was easily run out by Sam Curran. It was a gift for England and one that either batsman could have averted with the right call.

Kohli did his catching up in style, accelerating with ridiculous ease. Taking on Wood, he swivelled into a majestic pull for six, lifted the ball effortlessly over long-off and then chopped a one-bounce four.

He finished with four sixes and eight fours, working the gaps at will, before Jordan ended the innings with the wicket of Hardik Pandya. India’s 156 for six still looked light but without Kohli it would have been laughable.

Bhuvneshwar Kumar and Shardul Thakur got the new ball swinging well enough to keep the score down to 16 from the first three overs, before the introduction of Yuzvendra Chahal advanced the tale.
Buttler welcomed him with a big six down the ground and added another mighty blow before the over was done, but in between Chahal had the in-form Jason Roy caught off a mis-hit reverse sweep.

The powerplay ended with Buttler flexing his muscles through the leg-side, putting together a brutal seven-ball sequence of four boundaries and a six at Thakur and Chahal’s expense. At that stage he had 43 of the 57 runs on the board.

The format’s number-one batsman, Dawid Malan, was almost a spare part until he was stumped for a slow-going 18, enlivened only by a top-edge for six. Buttler raced to 50 in just 26 deliveries, emphatically re-shaping the equation in England’s favour.

He offered his first chance on 76, put down by Kohli, and was soon into personal-best territory. Bairstow’s arrival eased the burden, with the Yorkshireman helping himself to five boundaries, including the winning runs with 10 balls remaining, while Buttler carried his bat.