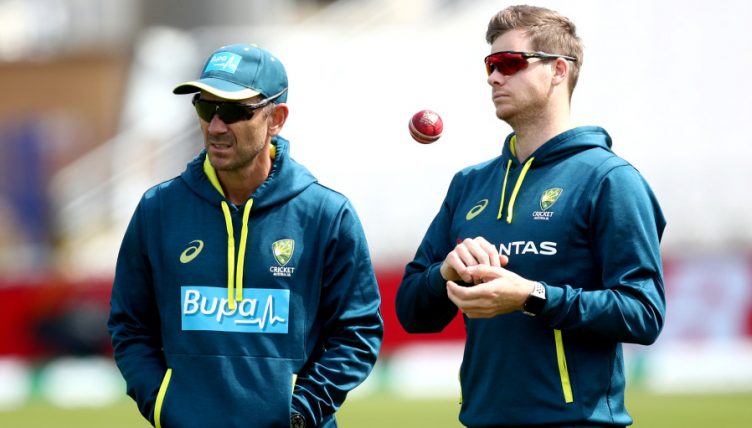 Australian coach Justin Langer bemoaned his sides’ poor use of the DRS system – describing one review as “desperate”, and provided an update on the health of Steve Smith ahead of the fourth Test in Manchester.

The 2019 Ashes series has been characterised by strikingly poor standards of umpiring from the three men in charge so far – Joel Wilson, Aleem Dar and Chris Gaffaney.

The slip in standards has increased the importance of effective DRS reviewing for both teams with Sunday’s breathtaking finale in the afternoon session a prime example.

A controversy surrounding the DRS mechanics was avoided with Australia unable to review having used up their allocation earlier.

Stokes claimed that the ball had clipped his front pad first and the trajectory that the DRS replay projected inexplicably factored this minute change of direction in.

This shows it best. Look at how line changes course after impact with the front pad.
It would have clipped leg stump, not smashed into leg/middle like DRS suggested. Line should continue straight but kinks

Unfortunately for the Australians, Stokes’ wicket remained in tact and within a matter of moments, history had been made.

Speaking on his team’s underwhelming use of the review system thus far, Langer said: “We’ve been really poor at it this whole series. We’ve talked a lot about getting better at our reviews. Certainly we have control of that.

“We’ve got a way we go about it but sometimes you don’t quite get it right. The one off Pat Cummins was getting pretty desperate at the end and that often happens. That’s just how it works out.

“It’s one-one in the series and we’ve been so close – one more wicket and we’re two-nil up and feeling pretty good about ourselves but that’s sport and we’ll pick ourselves up.

“We’re all feeling it. My gosh, you’ve got no idea how much that hurts losing, you have no idea. But whether you’re the captain, coach or a senior player, you’ve got to get up.”

The Australian talisman is set to return to the middle following a concussion sustained via a vicious Jofra Archer bouncer at Edgbaston just over one week ago.

Smith will play in an upcoming tour match versus Derbyshire, and should the batsman be given the green light following the match, coach Langer will be tasked with solving a selection dilemma after replacement Marnus Labuschagne starred with three fifties in Smith’s absence.

“We can’t fit them all in, that’s one issue we’ve got,” said Langer.

“One thing I do know is that we’re not batting well enough at the moment. I said at the start of the series that the team who bats best will win the Ashes.

“We’ve got some real questions to ask for the practice game and for the fourth Test match.

“We’ve got to also work out after a long summer, we’re going to have to rest some players, just to give them a mental freshen-up more than anything.”

With Labuschagne seemingly assured of a spot in the order, attentions have turned to under-fire batsman Usman Khawaja who is yet to make a fifty in the series.

Langer added: “Uzzy’s played a lot of cricket and averages over 40 in Test match cricket, he got a Test hundred seven innings ago, so we know he’s a very good player.

“He, like the rest of them, will be working hard to be ready for the fourth Test.”

READ: The extraordinary meal Ben Stokes ate the night before his Ashes heroics