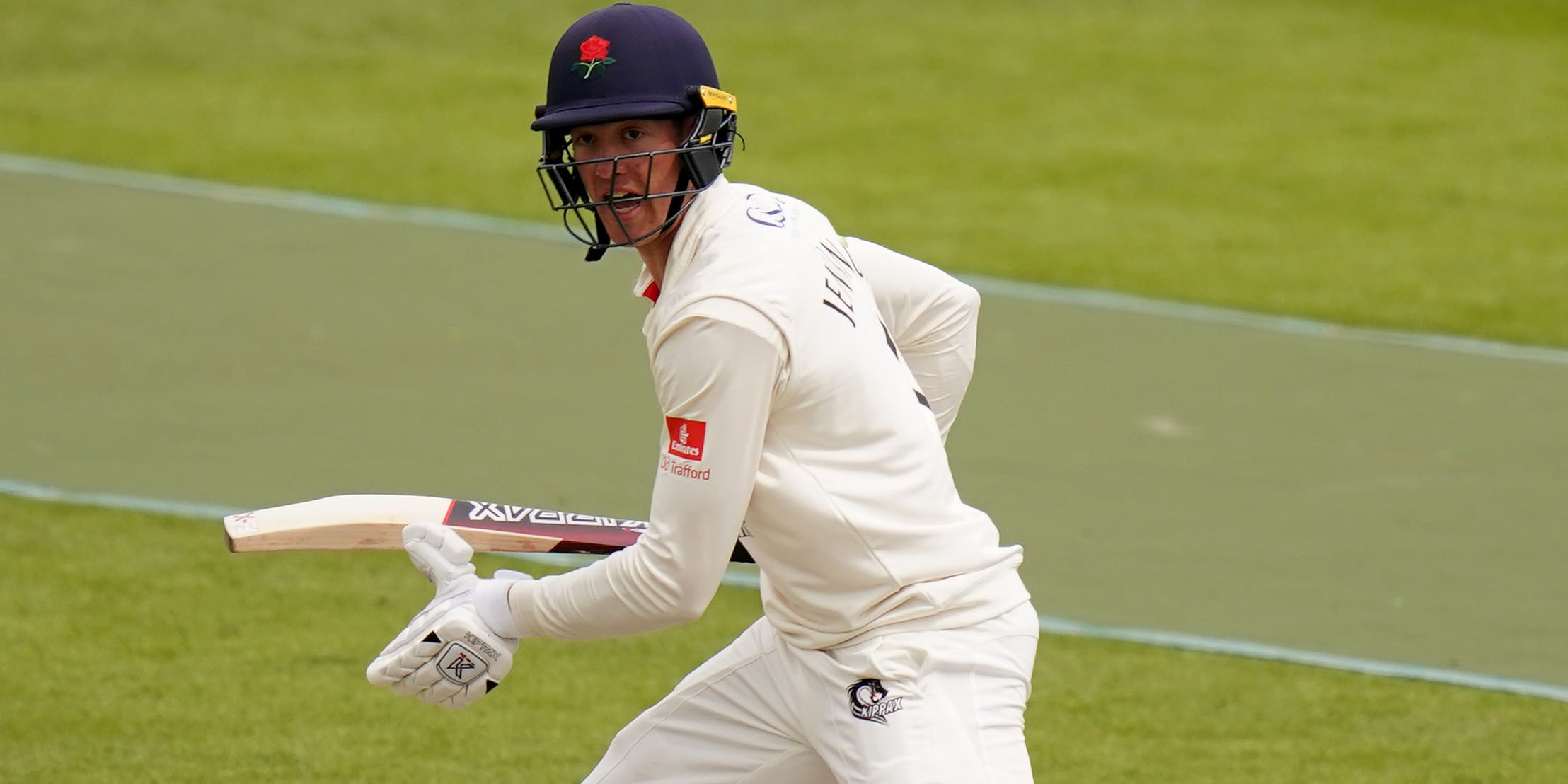 Keaton Jennings hit a century as Lancashire built a big advantage on the second day of their LV= Insurance County Championship Roses encounter at Old Trafford.

The former England batsman ground out 114 from 260 balls – his first first-class hundred in over two years – as Lancashire moved 191 ahead and reached 350 for six before the close.

Luke Wells weighed in with 60 and Josh Bohannon was unbeaten on 47 after sharing in a stand of 57 with captain Dane Vilas (35) in the Group Three fixture.

In the other match in the group, Sussex were battling to set Northamptonshire a competitive target at Hove.

The hosts closed with a lead of 61 on 142 for four in their second innings. The in-form Tom Haines was their chief hope on 64 not out although he had almost been the junior partner in an unbroken fifth-wicket stand of 44 with captain Ben Brown.

Northamptonshire had claimed a first-innings lead of 81 after being bowled out for 256 earlier in the day. Saif Zaib top-scored with 64 and number 10 Gareth Berg added an unbeaten 43 after sharing in a last-wicket stand worth 51 with Ben Sanderson.

Stand-in captain Hashim Amla’s 173 put Surrey into a commanding position in their Group Two meeting with Gloucestershire at The Oval.

Jamie Overton did not add to his overnight 50 but Rikki Clarke hit 65 and Sean Abbott 40 as Surrey posted 473 in their first innings.

Gloucestershire lost captain Chris Dent as they closed on 45 for one in reply.

A Leicestershire collapse saw Middlesex take control of the game at Grace Road.

The hosts were bowled out for just 136 in response to Middlesex’s 295 as Martin Andersson took a career-best four for 27. Middlesex then extended their advantage as they closed on 57 for one.

Middlesex had earlier lost their final three first-innings wickets for 35, leaving wicketkeeper John Simpson high and dry on 95no.

Durham were in a seemingly impossible position against Essex in Group One.

The hosts were skittled for just 99 at Chester-le-Street as Sam Cook claimed four for 38 and Jamie Porter and Peter Siddle finished with three wickets apiece.

That left Durham trailing by 83 before Adam Wheater (81) and Ryan ten Doeschate (55) then took the game completely away from them in a stand of 125. Essex ended the day 346 ahead on 263 for eight.

Leaders Nottinghamshire were 173 for three in reply to Warwickshire’s 341 all out at Edgbaston.

The visitors had earlier been frustrated by a last-wicket stand of 52 between Warwickshire’s Liam Norwell (30) and Oliver Hannon-Dalby (26) but Dane Paterson finished with five for 90.

Ed Barnard became the second Worcestershire batsman to narrowly miss out on a century against Derbyshire at New Road.

Coming after Jack Haynes’ 97 on day one, Barnard was dismissed for 90 in his side’s first innings but his efforts still helped his side post a healthy 421.

Derbyshire were 91 for three at the close having begun their response. Wayne Madsen was 31no.