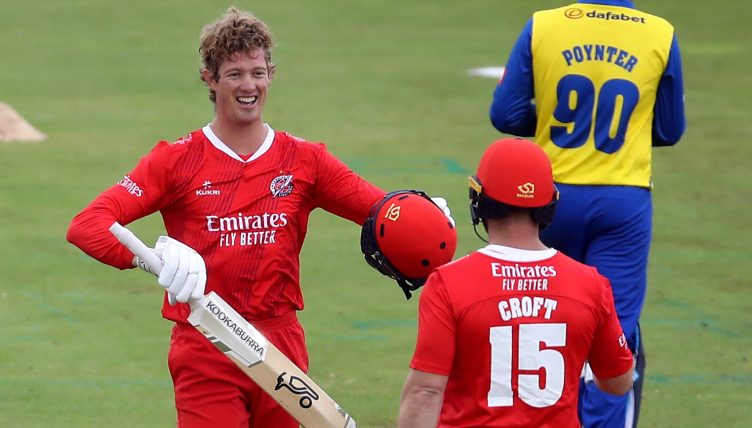 Jennings produced an outstanding knock of 108 off 63 balls, sharing a record-breaking opening stand of 170 with Alex Davies for the Lightning at Chester-le-Street.

The former England Test batsman hit 10 fours and three sixes, propelling his team to 190 for three in the North Group fixture.

Durham opener Alex Lees offered some resistance by scoring 51 but the hosts were convincingly beaten by 27 runs, closing their chase on 163 for seven.

The match at Emirates Riverside was the only one played to a conclusion on a frustrating first day of this season’s competition as rain caused the abandonment of the other six fixtures.

Kent were denied victory against Hampshire in agonising fashion at Canterbury.

The hosts were seemingly cruising towards an opening-round win at 52 without loss when rain forced off recent England batsman Zak Crawley and fellow opener Daniel Bell-Drummond with only five more deliveries required to constitute a completed match.

Hampshire had managed 139 for six from their 20 overs in the South Group clash.

At Chelmsford, Middlesex batsman Max Holden struck 102 off 60 balls against Essex Eagles before his efforts proved in vain.

Defending champions Essex were set 185 to win following Holden’s efforts but only nine balls of the reply were possible.

Elsewhere, England Test captain Joe Root’s return to county cricket was delayed after Yorkshire’s clash with Nottinghamshire at Emerald Headingley was called off.

Root was due to play for the hosts in the North Group fixture only two days after finishing the summer Test programme against Pakistan at Southampton’s Ageas Bowl.

Gloucestershire’s match against Northamptonshire, Derbyshire’s clash with Leicestershire, and Glamorgan’s meeting with Worcestershire were the other matches to fall victim to the weather without a ball being bowled.