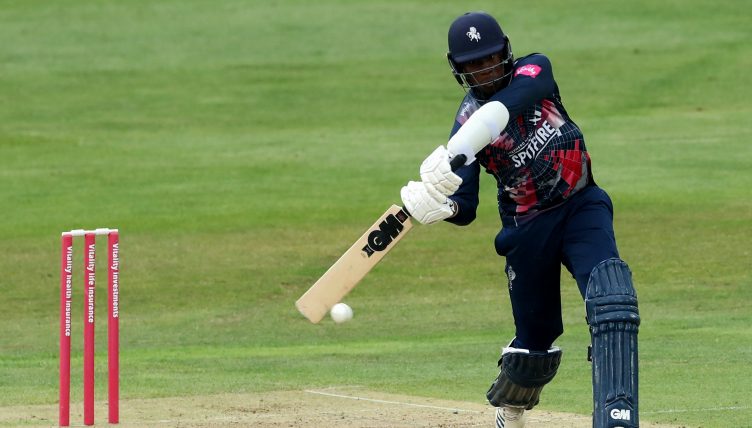 Captain Daniel Bell-Drummond impressed again with 81 from 45 deliveries, including 11 fours and one six, alongside Alex Blake’s unbeaten half-century as Kent made 192 for six.

In reply, Cameron Delport started off with a rapid 28 off 17 balls while fellow opener Varun Chopra made 41.

However, despite a determined 42 from Ryan ten Doeschate, Essex again came up short at 163 for seven as they suffered a third straight defeat.

Imran Qayyum claimed three for 25 as the Spitfires recorded a 29-run victory to continue their unbeaten first half to the tournament.

In Saturday’s late match under the lights at the Oval, a fine unbeaten half-century from England’s Ben Foakes helped Surrey to beat Middlesex by six wickets.

Middlesex’s innings had earlier struggled to gain momentum as Surrey’s bowlers kept the run-rate down.

Surrey captain Gareth Batty claimed three wickets, including two in his first over, to chalk up 100 T20 wickets for the county.

Will Jacks and Gus Atkinson both picked up two wickets each as Middlesex were restricted to 113 for nine, Max Holden top-scoring with 29.

However, a couple of early wickets for James Harris, both caught by captain Steven Finn, lifted Middlesex.

Nathan Sowter then claimed two in his opening over – dismissing Hashim Amla (11) caught and bowled before trapping England Test batsman Rory Burns lbw for a duck two balls later as Surrey were rocking at 23 for four.

Wicketkeeper Foakes, though, and Jamie Smith (38 not out) steadied the run chase along as Surrey closed in on victory.

Foakes finished unbeaten on 60, driving an eighth boundary of an impressive 50-ball innings to get Surrey past their target at 116 for four in 18.1 overs.

Surrey move above Sussex Sharks up into second place, two points behind Kent after five matches, with Middlesex fourth.