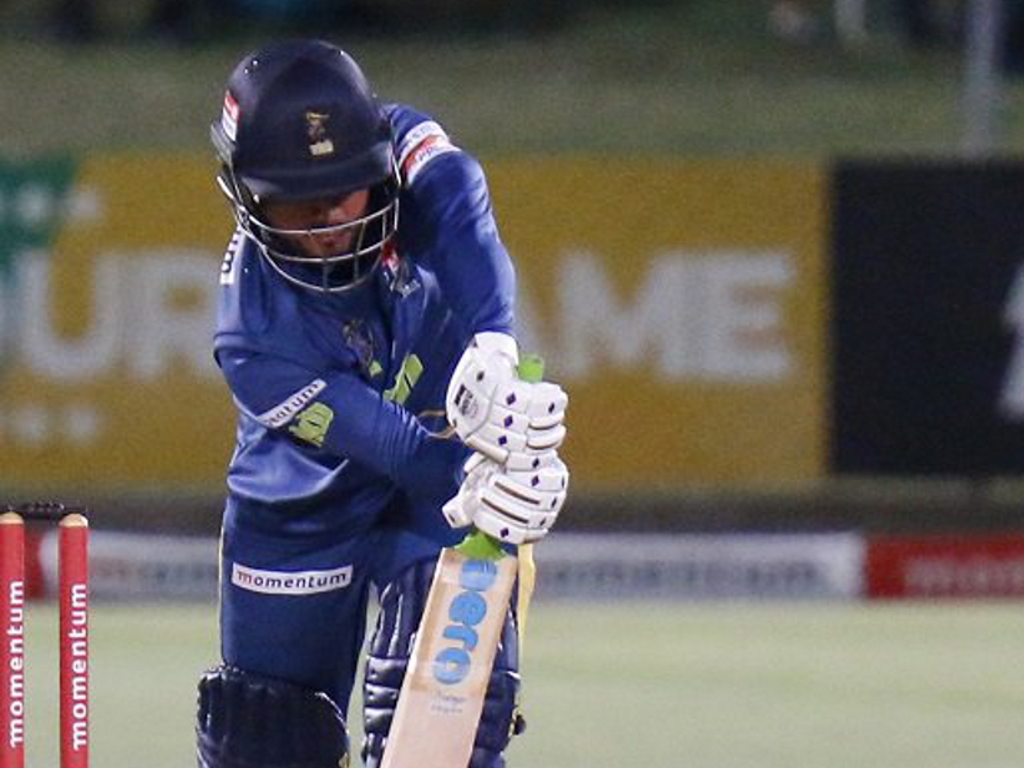 With all to play for on Thursday in their final MODC round robin fixture, the Dolphins were beaten by one wicket by the Knights in a thriller at Kingsmead.

It was a difficult result for the Dolphins’ to accept considering their performances throughout the season and captain Khaya Zondo couldn’t fault his players’ efforts.

“The guys have had to fight the whole season and I really appreciate that fight,” Zondo mentioned after the game.

“The thing is that the efforts come to a point where we need to put the performance together and get over the line.

“I think we just have to make sure that we make the big moments count. We let it slip, we went from number one to number four,” Zondo added.

Earlier in the day the toss went the Dolphins’ way and Zondo elected to take first strike on a balmy Thursday afternoon in Durban.

The Dolphins train never quite got going as it had throughout the season with the steady opening partnership of Morné van Wyk and Vaughn van Jaarsveld not bearing any fruit as the home side slumped to 28/2.

The hosts were left reeling at 54/4 when Dillon du Preez accounted for Zondo and Sibz Makhanya in the same over and the responsibility of rebuilding the innings fell on the shoulders of Sarel Erwee and Andile Phehlukwayo.

The left-handed duo began patching the innings back together successfully and wove together a partnership of 50 before Erwee was caught in the deep for 44. Phehlukwayo continued to keep the innings in one piece as he and Kyle Nipper took the Dolphins to 133 before the former fell for 39.

Nipper was then bowled by Sam Mofokeng for 15 and the Dolphins’ innings was in dire straits at 143/7 with 12 overs to bat.

Cool-headed Rob Frylinck and Prenelan Subrayen then got together to strike up another meaningful partnership as they strung together a fluent 52 runs for the eighth wicket before Subrayen lost his wicket for 25.

Frylinck’s 36 was the final contribution to the Dolphins innings as they were bundled out in the 50th over for a below par 204.

The defence got off to a shaky start for the Dolphins as the Knights’ openers Rudi Second and Tumelo Bodibe put on 61 for the first wicket – in stark contrast to the Dolphins’ earlier effort.

A flurry of wickets from the Dolphins saw the side from the Free State reigned in to 73/5, losing five wickets for 12 runs with Imran Tahir bamboozling the visitors’ strikers, grabbing the crucial wicket of David Miller first ball as well as the set Rudi Second.

Captain Pite van Biljoen stood tall with Aubrey Swanepoel when the Knights were 73/5 and put on 56 for the sixth wicket before the skipper fell victim to seamer Rabian Engelbrecht for 44.

Imran Tahir’s googly was to still influence the fixture as he knocked over Shadley van Schalkwyk for 20, leaving the Knights with 34 runs to get and three wickets in hand.

The set Aubrey Swanepoel was bowled by Frylinck in the 43rd over and then Dylan du Preez lost his wicket when he was bowled by Phehlukwayo in the 46th over which swung the momentum in the Dolphins’ favour.

With 25 runs needed and only one wicket in hand Marchant de Lange and number 11 Sam Mofokeng chipped away and managed to get their side over the line when De Lange hit a boundary past Phehlukwayo in the penultimate over to seal a memorable one wicket victory.