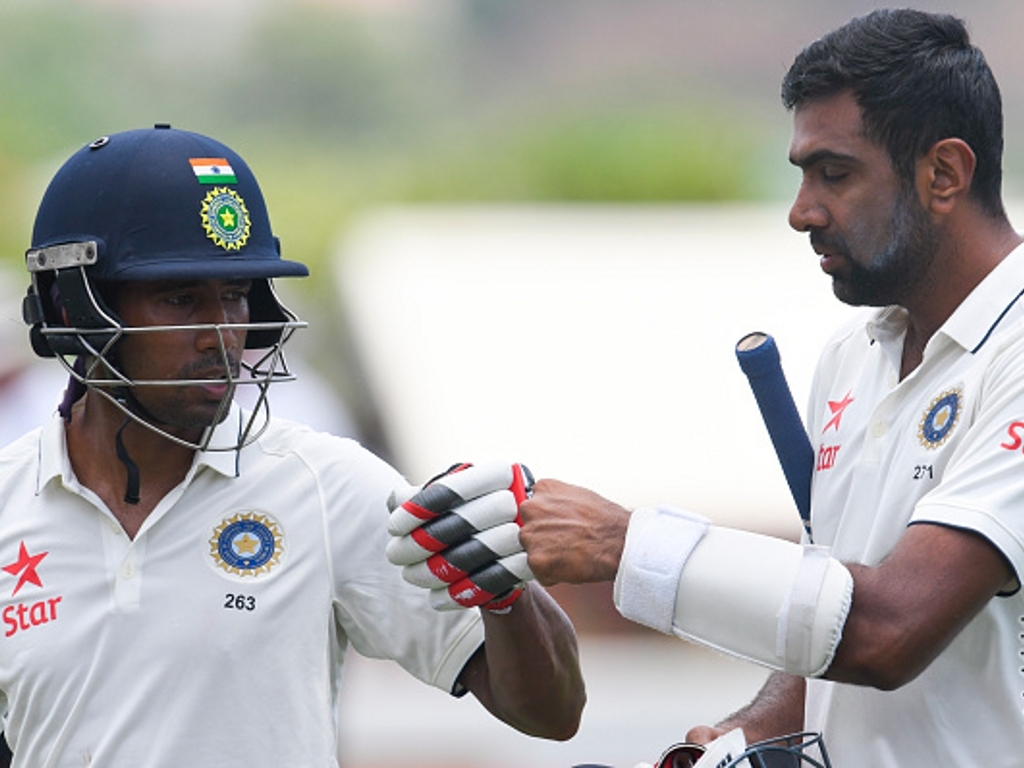 India captain, Virat Kohli, has paid tribute to Ravichandran Ashwin and Wriddhiman Saha for the valuable runs they scored in the lower middle-order during the Test series victory in the Caribbean.

Ashwin was promoted to number six and smashed two centuries in the series, while Saha made useful contributions in the opening two Tests before scoring a maiden Test ton in the third Test, to help India recover from 126 for 5.

After play was abandoned on the fifth day of a shambolic final Test, Kohli said: "It has been pretty good for us, a lot of positives, a lot of things we wanted to improve on we have,

"For me the biggest positive was Saha getting runs in the lower order plus Ashwin coming good at No. 6.

"Those were areas that were very important for us to solidify and we have done that in this series. I'm pretty happy. I hope we can keep on making that aspect of our team stronger because when you are in a tough situation in Test matches those are the positions that matter a lot.

"We've seen teams who have done well and won consistently, their lower order has contributed, especially the bowlers.

"These are important runs that take the momentum away from the opposite team. That's something we wanted to work hard on. We have done that and got the results in this series."

India played the first three Tests with five specialist batsman and five bowlers but for the final Test switched to six batsman, despite dominating the opening three games, Kohli explains: "We thought that we lost a Test in Galle [in 2015], we were a batsman short there,

"In the series against South Africa at home as well we were in trouble quite a few times because we were a batsman short. We wanted to try out this combination

"If we play four specialist bowlers back home, we feel we don't have the need for the fifth bowler… if you play three spinners on spin-friendly wickets that should get the job done. Even if you play two spinners and two quicks, Rohit [Sharma] and [M] Vijay can come in and bowl ten overs for me.

"This was something we wanted to try, in case we want to play with this combination going ahead the team should be comfortable with it. And they should know how to play in this situation as well. If you play with only one combination teams are going to start planning better against you.

"You need to be flexible. Unfortunately we couldn't get game-time."

The skipper expressed delight at the strength in depth developed in India's fast bowling ranks: "We have a good bunch of fast bowlers now,

"Apart from these five guys we have Varun Aaron who has played Test cricket, who has lot of pace. We have Dhawal Kulkarni.

"We have identified a few bowlers back home as well who we want to keep up-to-date with the fitness levels required to play at this level in Test-match cricket. That for me is one aspect that has been really pleasing to see.

"How Shami has come back [from injury] as well, how Bhuvi has come back to full fitness, he's bowling good speeds with swing as well. Ishant has always been consistently hitting good areas for us.

"You will see, with him, not having too many wickets in three to four innings, but suddenly he'll pick you a seven-for or six-for. That's why we back a guy like Ishant, because, against top-quality sides, he can still keep hitting those areas and he puts the batsman under pressure.

"Umesh has bowled wonderfully as well. The good thing is that everyone's flexible to be played or not played according to the conditions, and that, for a captain, is obviously a very good thing, because it gives you flexibility in the bowling combination that you want to pick.

"That was one aspect after someone like Zak [Zaheer Khan] retired, that was a big gap to fill, but these guys have started to take responsibility nicely, they've understood the areas that need improvement, and they've worked on consistency a lot. That's something that I saw in this series as well."

India lost their number one ranking to Pakistan, after a waterlogged outfield caused four days of play to be lost in Port of Spain, but the amount of Test cricket India have to look forward to, means they will have ample opportunities to return to the summit of the ICC rankings.