Home News Kohli thrilled to have Dhoni around

Kohli thrilled to have Dhoni around 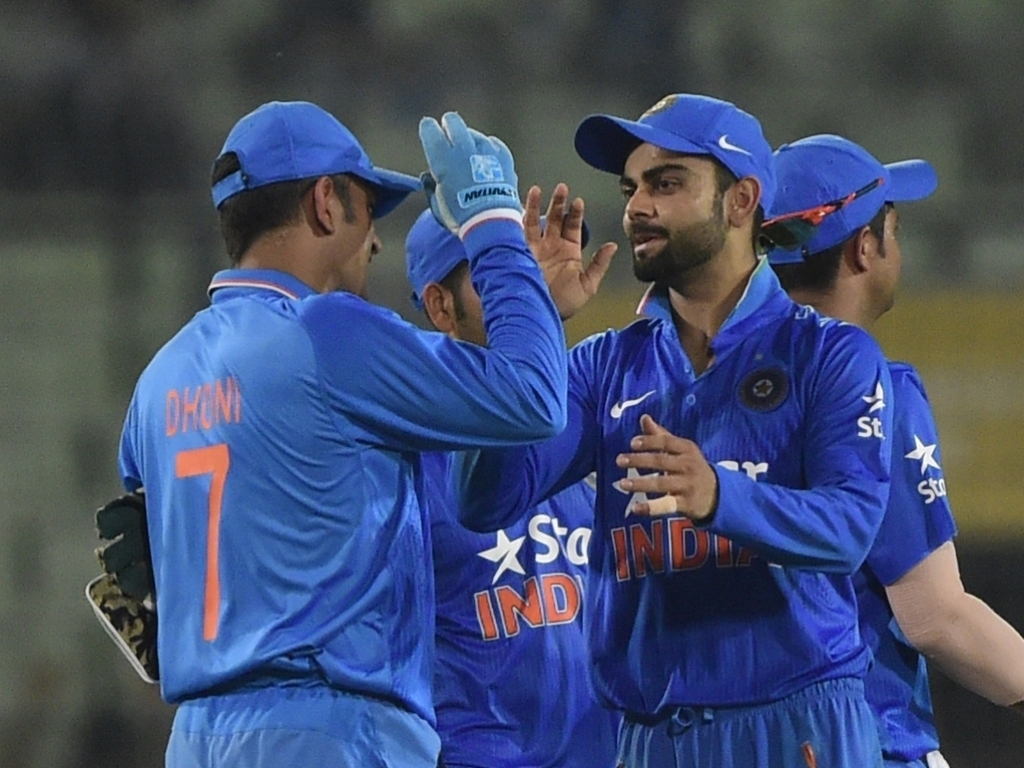 Newly appointed India limited overs skipper Virat Kohli is delighted to have his predecessor MS Dhoni still in the squad for the shorter formats.

Dhoni stepped down as captain in early January on the eve of the announcement of the limited overs squads to face England but has not retired from cricket altogether.

The veteran wicketkeeper batsman will be a valuable asset to the new skipper Kohli who has led India in Test cricket since Dhoni’s shock retirement from the longest format in the middle of the series in Australia.

Kolhi said: “It’s a win-win situation for the captain coming in to still have Dhoni for his advice, his inputs and his cricketing brain.

“But what I’m most happy about is that he’ll be able to play free cricket and express himself as the aggressive MS Dhoni we knew when he first came into the team. As a player, responsibility can take that away from you. I think it’s time he enjoys his cricket because he has taken so much burden for the country.”

Dhoni racked up more international matches as captain than any other skipper in history and has led his country to glory in the World Cup and World T20.

Kohli has said that he enjoys a good relationship with the former skipper: “I’ve learnt a lot from him in terms of leadership and conducting myself.

“When you think ‘Dhoni’, the first thing that comes to mind is ‘captain’. For me he’s always going to be my captain because I started my career under him.

“He will always be the guy who guided me, who gave me opportunities, who gave me ample time and space to grow as a cricketer, who saved me from getting dropped many a time.

“There’s a lot of mutual respect between us because he understands that having been given the opportunity, I have actually worked hard on my game and improved the mental side of things. We share a great friendship and I couldn’t be luckier to have him around for his ideas.

“It’s something I’ve been preparing for in my own head, and MS has been talking to me as well about strategies, how to approach situations, etc because he also understood how important it is to guide me.”

Kohli is eager to see Dhoni play with freedom and would like to see the veteran bat higher up the order.

The skipper added:  “I would love to see him bat higher up than he has been for the last few years and totally enjoy his cricket. If MS Dhoni enjoys his cricket and plays the way he did in his initial years, then the team is in a very solid space.”

The new skipper is confident he will achieve the same success he has as Test skipper in the shorter formats.

He went on:  “I feel confident taking it up because of the kind of cricket I’ve played in the shorter format and what I’ve learnt from playing in the different situations in that format. So I’ll be able to execute plans with more conviction starting off, which wasn’t the case when I became Test captain.

“I was told a day before that MS is not going to play… and I’m going to captain the country; it was quite surprising for me because, in my head, I was still finding my feet in Test cricket.”

Kohli has set his sights on the 2019 World Cup already and cannot wait to lead his country in the quadrennial showpiece.

He said:  “Just hearing about the World Cup gives me goosebumps. I think it’s a wonderful phase in Indian cricket where the youngsters have an opportunity to come in and seal their spots for that big occasion.

“The main goal is to identify players who can play in different positions and can work around the batsmen who’ve been featuring in the ODI set up for a long time, at the same time giving them ample time to prepare for those big events and not rush them into any kinds of plans that they can’t execute.

“[But] there is a lot of time to go for it. Our basic goal is to win every game that we play – not taking this process for granted, saying it doesn’t matter if we win or lose games. I don’t think that will create confidence.

“When you’re put under pressure, that situation is too overwhelming for a lot of people and you don’t know a way out. But if you’re encountering those situations and know how to win from different situations, it makes a mindset for big tournaments, for big games, for big oppositions and that’s what you start craving for.

“So I think it’s a gradual process where the main aim will be to win games and give guys the vision and mental strength, and the ability to counter situations and come back and win games.”

Having captained in Test cricket and led the Royal Challengers Bangalore in the IPL Kohli feels leadership has made him a better cricketer.

He concluded: “Responsibility has always been good for my game, in the sense that there’s no room for complacency. In the IPL, when I’m captain [of Royal Challengers Bangalore], it’s very easy for me throw my wicket away after 60-70, but the reason I push on is that I realise as captain I need to set an example, make that kind of effort before I can ask the same from others. That’s something I’ve always believed in.