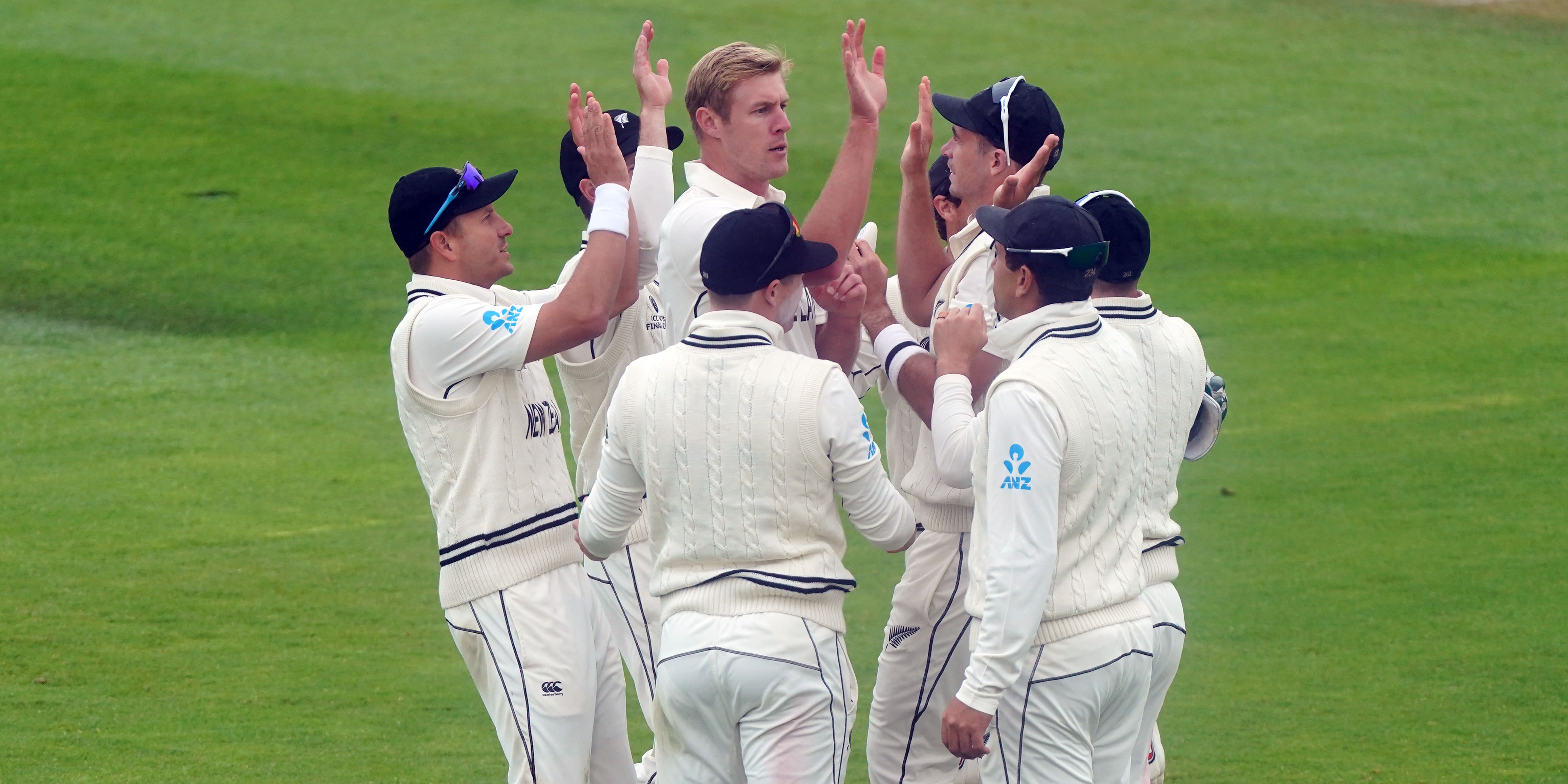 Kyle Jamieson produced a seam-bowling masterclass as New Zealand seized the initiative on day three of the World Test Championship final against India.

The 6ft 8in paceman from Auckland wrapped up sensational figures of five for 31 in 22 relentless overs as India were dismissed for 217 at the Ageas Bowl.

New Zealand then posted 101 for two, with their strong position only mildly dented by Devon Conway’s dismissal just two balls before the end of play.

Like Conway, who made 54 to instantly trump every Indian batsman, Jamieson is a rookie at the highest level. Making just his eighth appearance, this was his fifth five-for and nobody on either side has thus far come close to matching his impact on a contest this being billed by the International Cricket Council as ‘The Ultimate Test’.

Jamieson’s work on Saturday had been meticulous, taking the first wicket of the match when he tempted Rohit Sharma into a rash drive and conceding just 14 runs from as many overs. Returning for another shift he got full reward for his efforts, besting another four Indian batsman including the best of the lot: Virat Kohli.

Kohli had shown supreme diligence to make an unbeaten 44 on day two, getting off the mark with his only boundary and then settling in and fending off the combined efforts of New Zealand’s seam attack in near perfect bowling conditions.

He returned to the crease on Sunday morning to face more of the same, with defiantly gloomy overheads and Jamieson immediately probing away. This time it was all too much and after eight balls, with no addition to overnight score, Kohli was trapped lbw in front of leg stump.

The dangerous Rishabh Pant replaced him and took 20 balls to get off the mark, doing so with an extreme rarity – a boundary off Jamieson. Unable to allow such impudence to pass unpunished, he made Pant pay with his wicket just two balls later as he went hard at one that moved away.

When Jamieson eventually took a breather India’s position only worsened, Ajinkya Rahane tossing away a well-made 49 by dragging a telegraphed Neil Wagner bouncer straight to Latham at square-leg. They were 211 for seven at lunch, with Tim Southee chipping in to see off Ravichandran Ashwin.

The break allowed Jamieson to recharge his batteries and he completed his haul when Ishant Sharma and Mohammed Shami succumbed to successive deliveries, the latter a delicious hooping yorker.

Trent Boult finished things off when he made Ravindra Jadeja the seventh wicket of the day, leaving 21 overs for India to make some inroads of their own before tea.

Frustratingly for them Conway and Latham denied them to reach 36 without loss, despite the best efforts of Shami. He produced a couple of unexpected lifters, one to each batsman, and was unfortunate to see both loop over gully.

The pair went on to add 70 for the first wicket, immediately topping India’s best partnership of the match. With Shami and Ishant luckless, it needed Ashwin to force the breakthrough via seven overs of pressure and one rash drive from Latham (30) that picked out Kohli at short cover.

Conway persevered to make the first half-century of the game in 137 balls but was kicking himself after flicking Ishant to mid-on just a few moments before bad light stopped play.