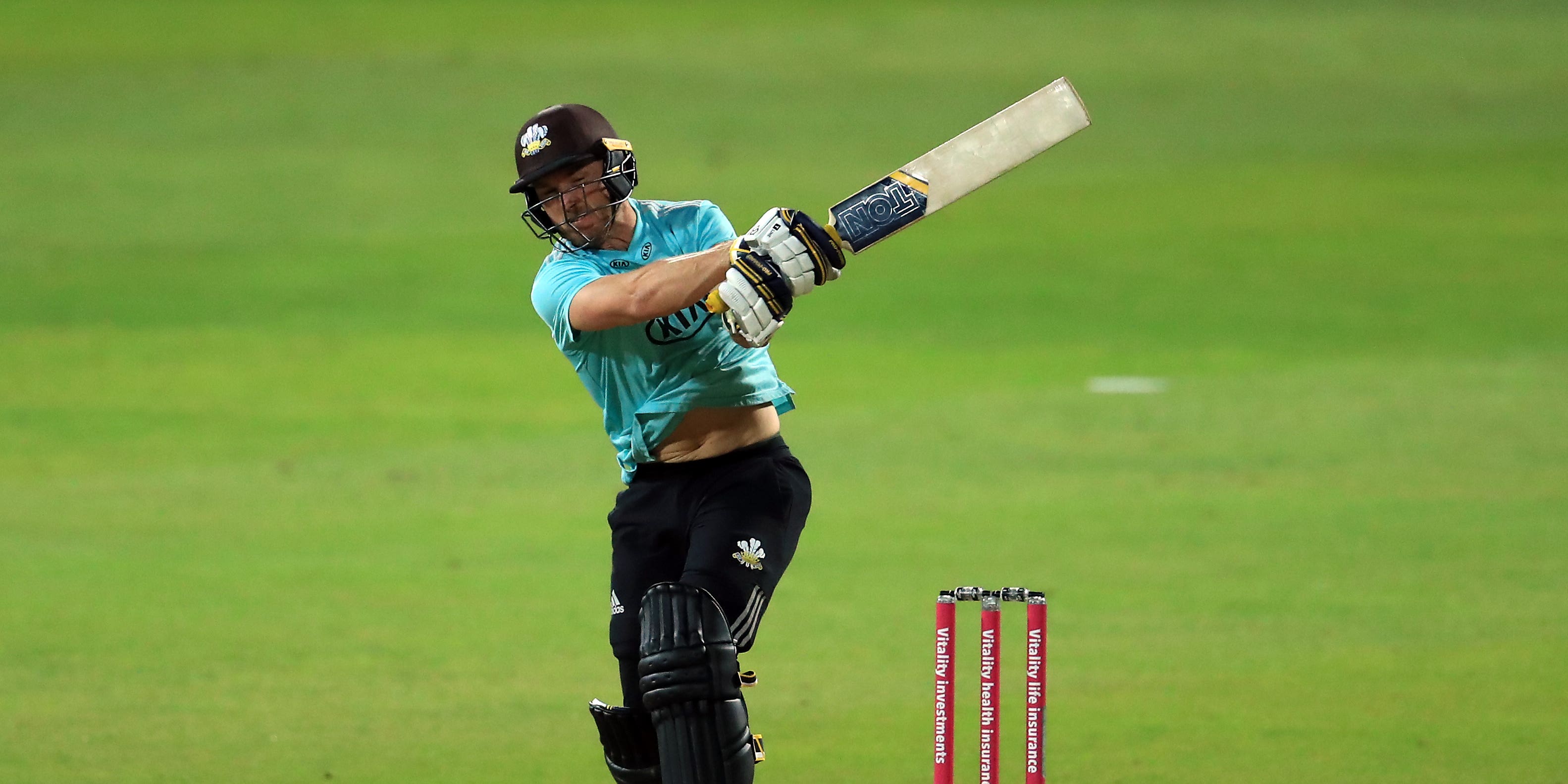 Laurie Evans and Sam Curran blitzed a century stand as Surrey made it maximum points from their first two Vitality Blast games with a merciless seven-wicket destruction of Somerset at Taunton.

The home side posted 187 for six after losing the toss, Tom Abell leading the way with 69 off 44 balls. Gareth Batty was the pick of the Surrey attack with one for 26.

In reply, Surrey breezed to 188 for three with four overs to spare, Evans striking two sixes and eight fours in his 65, while Curran’s career-best 72 not out featured six maximums and five other boundaries.

Their third-wicket partnership added 104 in just 8.5 overs and sent Somerset crashing to an embarrassing defeat.

Defending champions Nottinghamshire slumped to an 18-run loss after they were savaged by a brutal Birmingham Bears batting display at Trent Bridge.

The visitors roared to 229 for five, their third highest T20 total, with Sam Hain and Carlos Brathwaite plundering 84 from the last five overs after Ed Pollock set the tone with 62 from 34 balls.

Ben Duckett’s 51 from 27 balls gave Nottinghamshire hope and Tom Moores made 38 from 21 balls but Brathwaite took two for 28 and Jake Lintott two for 30 to restrict the hosts to 211 for nine.

A brilliantly-measured partnership between Jordan Cox and Jack Leaning steered Kent to a 16-run win over Middlesex at Canterbury.

The hosts were wobbling on 47 for four before Cox and Leaning both made 64, helping them recover to 178 for eight, despite a hat-trick for Chris Green, who took five for 32.

Luke Hollman countered with a high-class 51 off 33 balls, but the visitors lost wickets too frequently to seriously threaten the hosts and finished on 162 for eight.

At Grace Road, Matt Critchley struck an unbeaten 80 as Derbyshire registered their first win, despite Afghan seamer Naveen-ul-Haq taking three for 26 on his home debut for Leicestershire.

Critchley and Luis Reece, who hit 51, struck four sixes apiece, while Gavin Griffths added one more but conceded 26 in an over for figures of one for 49 from three.

Critchley then took two for 31 with his leg breaks and Netherlands pace bowler Logan Van Beek three for 37 as the Foxes were bowled out for 186 in 19 overs to lose by 23 runs.

Brydon Carse inspired Durham to a 20-run victory over Yorkshire at Emirates Riverside.

Carse scored his maiden T20 fifty to elevate Durham to a match-winning total of 181, despite career-best figures of 4-44 from Jordan Thompson.

Jonny Bairstow threatened the home side, but Carse made the decisive impact to dismiss the England man for 67, while a late surge from Harry Brook proved in vain.

Left arm fast bowler Wood’s four overs went for just 15 runs, along with the scalp of Aron Nijjar, with fellow homegrown player Liam Dawson returning a miserly one for 17.

Joe Weatherley top-scored with 42 as Hampshire struggled to 155 for six but – despite Tom Westley’s 44 – the hosts were bowled out for 142, losing the final five wickets for 22 runs.

Phil Salt and George Garton gunned down a target of 178 with 16 balls to spare to get Sussex off to winning start with a five-wicket victory at Gloucestershire.

Salt, in his first appearance of the season for Sussex, made 77 not out from 49 balls and Garton, who had only made 103 runs in 23 T20s before this, made 46 from only 25 balls as Sussex waltzed home.

Moeen’s’s 52 put the visitors on course for 185 for seven from their 20 overs, while the hosts could only manage 153 for nine in reply.